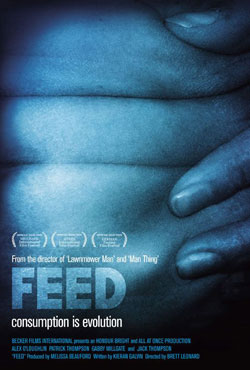 A lawman (Patrick Thompson) investigates a mysterious Web site that caters to men who like obese women.

In Sydney, the cybercrime investigator Phillip Jackson (Patrick Thompson) finds an Internet site where a man is feeding obese women. Phillip is concerned that the site may have to do with murder, as many of the women who had been on the site appear to have disappeared. He becomes obsessed with proving that there is something behind what appears to be simply consenting adults engaged in actions that common people would find unusual.

He loses his job and his girlfriend and then travels to Ohio to track down the person behind the website, Michael Carter (Alex O’Loughlin). Michael tells Phillip that he is releasing fat women from the standards of unfair society. But there is something darker taking place for that webcam audience and Phillip is willing to throw everything away to find out what it is. 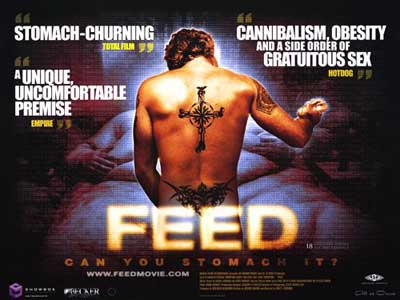 I can never dislike a movie that starts off with the song “Cherish” by the Association a perfect light happy sugary song that is a little creepy itself and is a great counter-point to the dark movie which it is in. “Feed” probably won’t be your favorite date movie but it is probably just a little less dark than you have heard. The basic themes that the movie tries to explore are what is a healthy relationship? What is love? Does being consenting adults make behaviors acceptable? What is good and what is evil?

The movie hits you hard with its early images of a thin man getting off on a very overweight woman (about 600 pounds) and can’t find anything to match that power in the rest of the story. But for a thriller the movie tries hard to make us think and for that it is well worth watching.

The “hero” is in a relationship with beautiful woman and its violent, distant, full of sex and no love. He shows no warmth to his girlfriend no matter how she tries to get close to him and she finally gives up on him and leaves. He is more about appearances than fact and wants to play the hero but only has the obsession. He likes to think he is a caring man who is willing to lose his job and travel on his own to the United States to investigate a crime that no one else believes is illegal.

The movie explores a community which most of us are unaware of, that of the Feeder/Gainer relationship which put in simple terms is where a man feeds a woman to the point where we would feel it was unattractive and worships her appearance. By throwing images of men finding very large women as sexual objects it hopes to shock us and then make us question why we found it shocking in the first place? Doesn’t Michael and Deidre (who is the woman being viewed on the website) appear to be more loving than Phillip and Abby? Who is the happier couple? 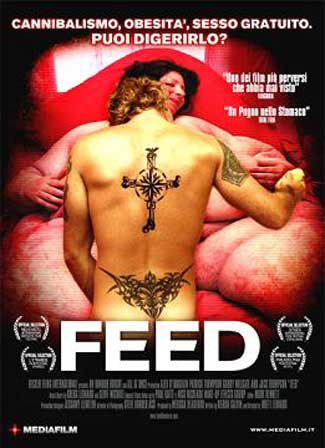 While Michael and Deidre appear to be happy we know that the fact that he is filming Deidre for a website that the relationship will not end in hugs and puppies. We know the website has to have some dark purpose and of course it has. And here is the biggest issue I have with the movie, we can see that Michael is crazy and not up to any good from the beginning so it is hard to view him as someone we can sympathize with.

The movie isn’t sure if we should hear what Michael has to say about relationships and society or just view him as a nutcase. The hero is pretty much an anti-hero so when we get to the surprise ending I don’t think we are very surprised. Besides being the fact that he is almost as unhealthy in his relationships as the bad guy he gets his ass kicked everytime he meets up with the villain. I mean come on, who wants a hero who is creamed by a smaller guy every single time! After a while it is easy to think that our cop is just going to die so lets get it over with. The movie loses some steam as we get to the ending. 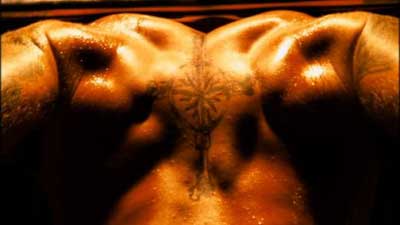 It has an original subject for a thriller, that of the feeder and gainer relationship.
It had good pacing.
The acting was good.
The makeup was wonderful. The fat suit was very realistic.
The fact that both male characters were controlling just in very different ways
Gabby Millgate as Deidre did a great job making us believe she was really that large.
What doesn’t work for me:

*No likable characters. By the end I wasn’t rooting for anyone.
*I think the greater questions the movie brought up were lost by the end of it.
*The twist ending wasn’t very surprising.
Despite some of the flaws of “Feed” I thought it was interesting through out the entire movie, I was never bored by it and sometimes I think it gave me something to think about. We should judge relationships by the people in them and not the appearance of them. The acting was good, the makeup first rate and the story interesting. I will pass on the popcorn I don’t feel hungry suddenly, but I give “Feed” three and half stars. If you want a thriller that takes on less than common subjects, watch “Feed”. You can find it on amazon.com.