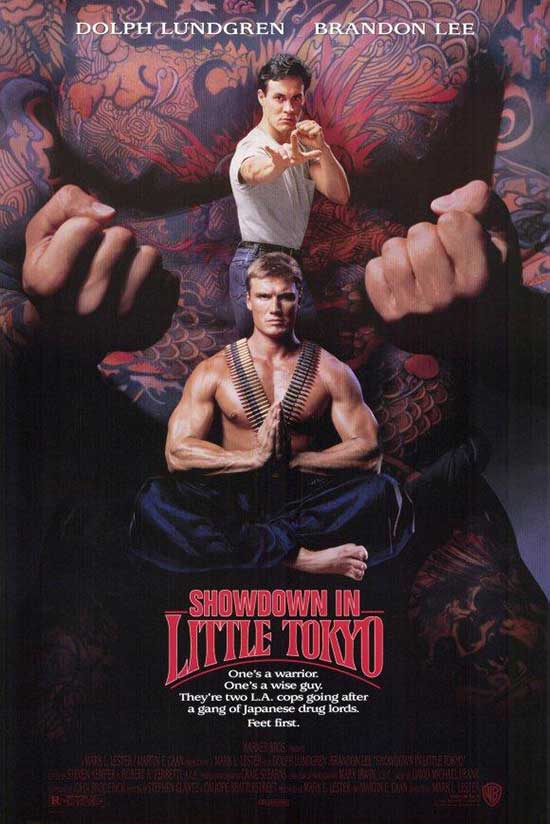 Two cops have to work together to bring down the Yakuza, while trying to protect a beautiful woman.

If there’s one thing that I rarely get tired of, it’s action movies from the ‘80s and ‘90s. They usually were loud, bombastic, and filled with a lot of fun violence and gore. While you hear a lot of genre fans lament about how tame a lot of horror movies are today compared to how they were in the ‘80s, you could say that action movies are not nearly as awesome. They rarely reach the ridiculous heights nowadays like they did when guys like Arnold Schwarzenegger were at their prime.

During this golden era of hilariously over the top action flicks came 1991’s Showdown in Little Tokyo. It’s the story of police detective Chris Kenner (Dolph Lundgren), an American who spent a lot of time in Japan as a child and has embraced a lot of Japanese culture. After the film begins, he gets a new partner named Johnny Murata (Brandon Lee), a smart alecky Japanese-American who has very little connection to his Japanese heritage beyond his mastery of martial arts. As common with most buddy cop movies, they have their differences but start to overcome them to take on a vicious Yakuza boss. Caught in the middle of the war between cops and Yakuza is a beautiful Japanese woman that Kenner begins a romance with. 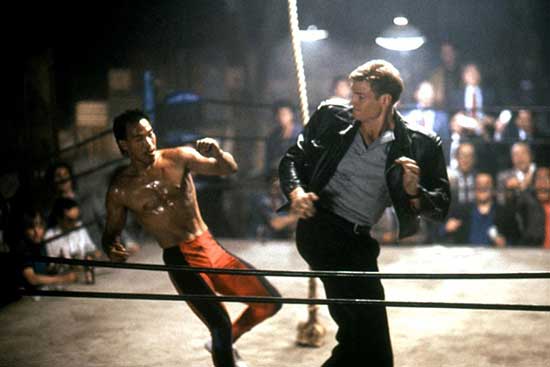 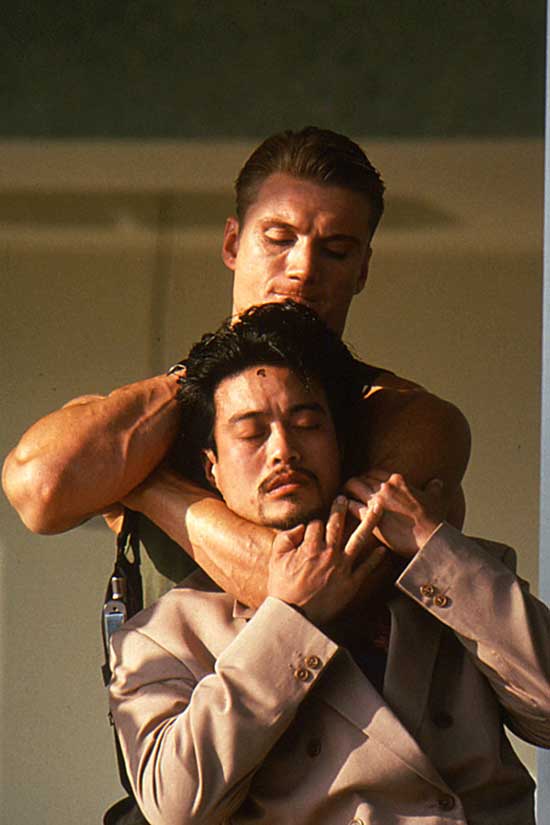 The thing about Showdown in Little Tokyo is that if you’ve seen an ‘80s action movie, particularly one of the buddy-cop subgenre, then you should know what you’re in for. It pretty much follows the same formula created by Lethal Weapon almost beat for beat. While the filmmakers here at least tweak a few things to not completely copy Richard Donner’s classic, it’s still far too derivative for its own good. Nothing in this plot (what there is of one) will surprise you unless you somehow avoided watching action movies over the last 3 decades. However, a lot of us didn’t watch these films for their plot in the those days anyways. We wanted to see asses get kicked and things blow up without having our intelligence insulted in the meantime.

The good news is that the film does deliver on the action front. While there’s a few scenes where we’re seeing the characters use guns, most of the clashes between our characters and the Yakuza were martial art fights that were highly entertaining. Dolph Lundgren actually does decent in those scenes, delivering when he can. However, the real joy was watching Brandon Lee in action. His own fluidity and grace made Dolph look kind of like a lumbering clod in comparison, making Lee’s fights seem more dynamic. With that said, it’s worth noting that no matter who was the focus of a scene, the fights were always wonderfully fast, violent, and exciting. The only drawback, then, would be that the movie asks you to ignore certain basic facts about the human body and how it reacts to certain kinds of injury. 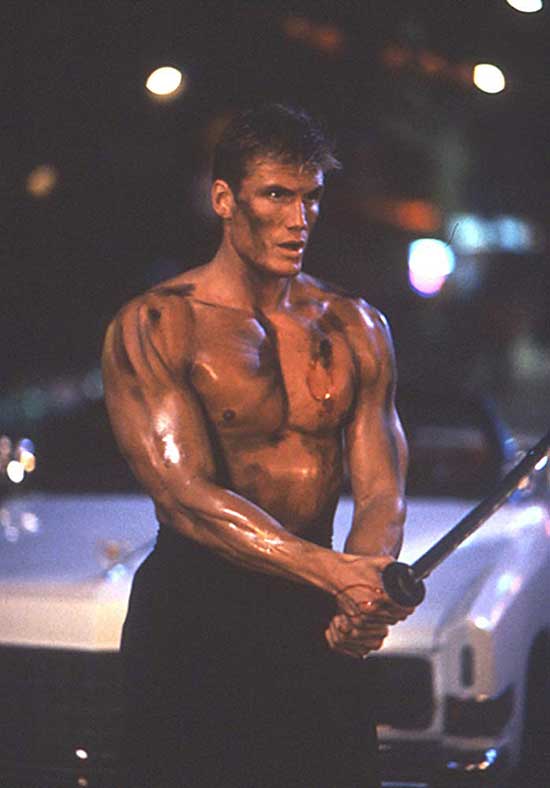 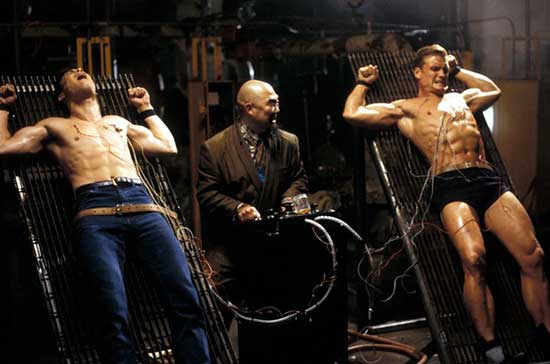 Most of these films require you to have a very lax suspension of disbelief. You have to allow yourself to buy that a character can take the beatings that the heroes take and still be able to keep going. Showdown in Little Tokyo is no different, but it does take things a bit too far when it shows our main character getting shot in the upper left chest and be “fine”. While I don’t claim to have a medical degree, or be any kind of expert on human anatomy, but I’m pretty sure that a wound like that would completely incapacitate him. After all, it would have at least punctured a freaking lung, and no one is going to keep fighting the bad guys after that. Even if a person could, the blood loss would make it impossible to last long. It’s so hilarious unbelievable it took me out of the movie. After that, it was hard to take anything about the movie seriously.

Perhaps it’s possible that Dolph Lundgren is so badass that his badassery somehow overcomes the laws of biology that us mere mortals are bound to and I should just stop questioning.

The acting is fairly decent for the most part. Tia Carrere is the exception here, giving a rather weak and flat performance. However, her character is really there just to be a love interest when she’s not being victimized, so there really wasn’t much for her to work with. Cary-Hiroy Tagawa fared much better as the main villain. In the ‘90s he seemed to be the go to actor if you needed someone to play an Asian bad guy, and  he was always reliable. While he may have come perilously close to being over the top here, he still gave wonderfully sleazy and menacing performance here. Lundgren himself never was a great actor, and he never quite had the charisma of other action stars like Arnold Schwarzenegger or Sylvester Stallone. However he still had enough screen presence going for him to carry the film as its main star. 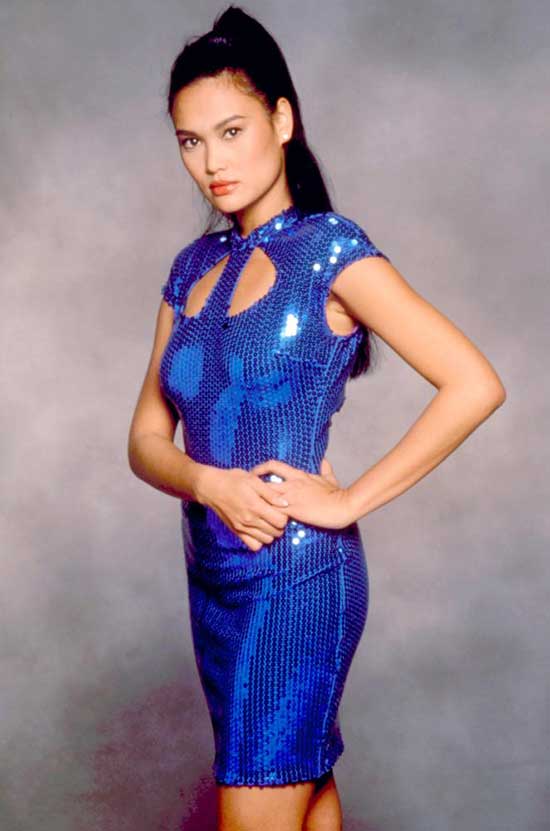 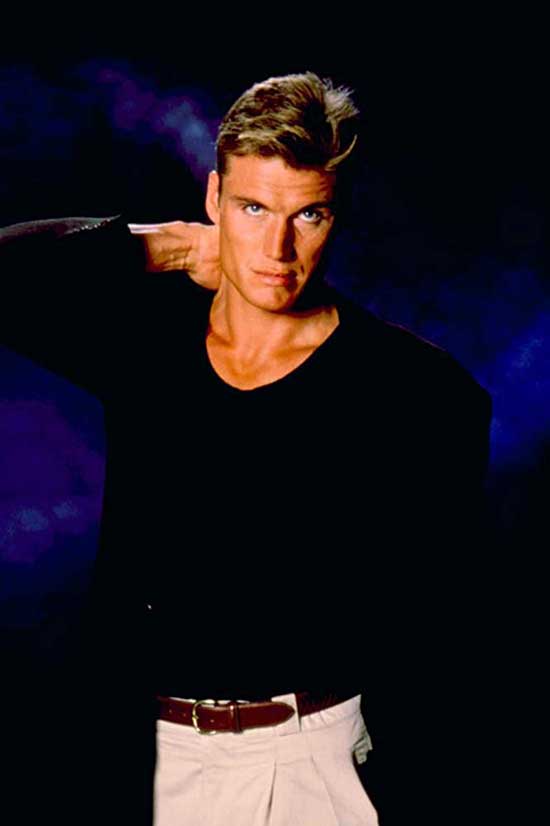 The real gem here, however, was Brandon Lee. I already mentioned he dazzled with his martial art skills, but he also impressed with his acting. He easily outacted Lundgren (which, granted, isn’t that hard to do), and stole most the scenes he was in. Lee pretty much ended up being the main reason to sit through Showdown in Little Tokyo. I can’t imagine it being nearly as fun without him. It also is a reminder that he had all the tools to become a superstar had his life not been cut so short while making The Crow. 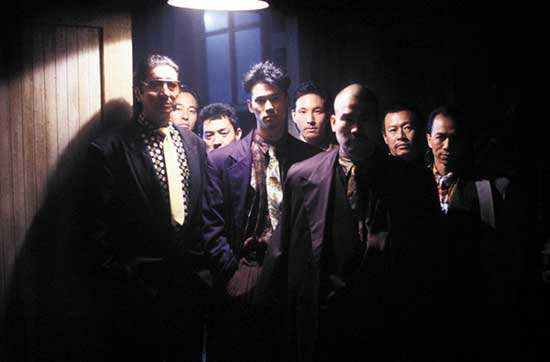 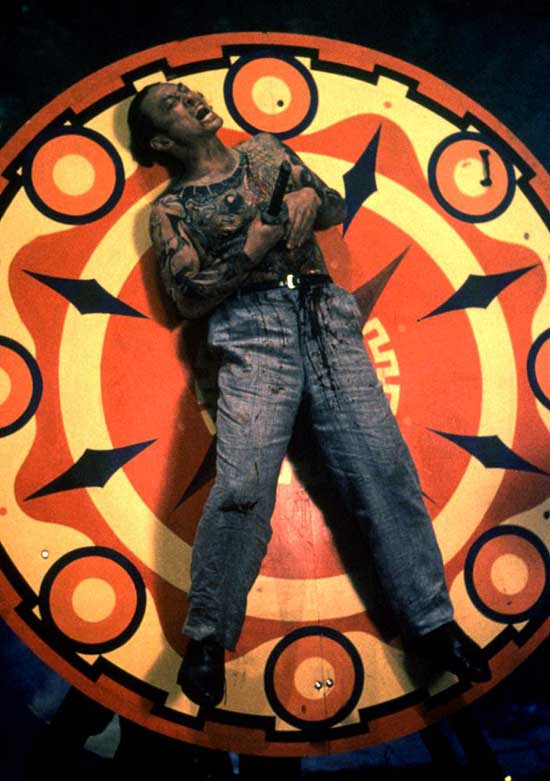 I hadn’t seen this film in over twenty years, so it was a fun trip down memory lane to watch it again. However, this movie isn’t going to knock your socks off. It’s derivative and filled with some laughably ridiculous moments of hyper macho-ism. It’s not nearly as good as some classic action films that came out in that particular era, but it manages to have enough going for it to be fun enough that you may not care much about its flaws. That’s not to say you won’t notice them, but you might be able to ignore most of them. There are worse films to waste your time on, so Showdown in Little Tokyo is worth a watch.