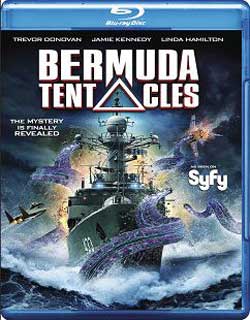 The president, being flown over the Bermuda Triangle, is forced to be jettisoned in his escape pod after lightning hits Air Force One.  A Special Forces unit is then sent on a rescue mission to bring the president back home safely before he runs out of air.

Being a SyFy original, I knew what to expect.  Horrible acting, bad writing, awful CGI, off tune music score was all on deck for this sci-fi lemon, and let me tell you, I was not let down.  That’s too bad too, because there are some decent actors that apparently needed money.   On board for this film were Trevor Donovan (Days of Our Lives, 90210), Linda Hamilton (Terminator, Beauty and the Beast), Mya (Chicago, Cursed), Jamie Kennedy (Scream, Malibu’s Most Wanted), and John Savage (Deer Hunter, Godfather III) were all billed in this movie.   Not a bad line up you say?   Well, unfortunately the actors were not given much to work with.  But let’s get into the meat of the matter and find out just what this movie is about. 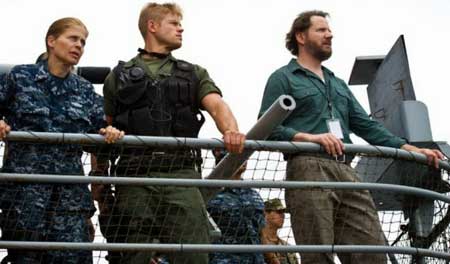 First off, President DeSteno (Savage) is on board Air Force One being flown over the Bermuda Triangle for an unknown purpose (maybe on his way to get a haircut). A storm begins and lightning hits the airplane causing an explosion.  President DeSteno is put into his escape pod, given a gun, and shot out for his safety.  A distress call is also sent out from Air Force One.

Cut to the Atlantic Ocean where a Special Forces team lands on a ship. It’s not really clear if this team is the Army, Navy, Air Force, Marines or the local Boy Scouts, but they do say “hoorah” a lot.  The team is led by Chief Trip Oliver (Donovan), a young risk taker who resembles Casper Van Dien quite a bit.  The team is lead to see Admiral Linda Hansen (Hamilton).  You immediately know that there is animosity between Oliver and Hansen, the tension is palpable; you can palp it, if you want to.  Here Hansen gives the team their orders that they are to rescue the president before he runs out of oxygen.  The problem is the president’s escape pod is several miles under the ocean. 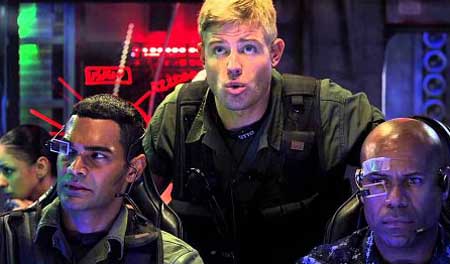 During the planning stage, the ships in the area are suddenly attacked by giant tentacles arising out of the ocean.   The tentacles at first seem to only be surveying the area.  The ship’s scientist, Doctor Zimmer (Kennedy) states that they appear to be tube worms, angry tube worms at that.  The tentacles begin their attack and start stabbing and grabbing people left and right.  They knock helicopters out of the sky and nothing short of concentrated firepower on one at a time seems to affect them.  This makes the team even more energetic to rescue the president.

Once on an experimental submersible, the team heads to the location of where the president is and finds themselves inside a city where they find the remains of ships from throughout time.  They deduce that this is the mysterious cause of the disappearances in the Bermuda Triangle.  They are also attacked by the same tentacles as the ships above.   As the battle wages on the ocean surface as well as under the ocean, it becomes clear that they are dealing with aliens.  Once they rescue the president, and lose most of the team, they narrowly escape when they realize that the “city” they are in is actually a giant alien spacecraft that raises out of the ocean and makes its way to the Florida coast, destroying Naval ships as it goes.  The team must find a way to destroy the ship before it reaches land.  Chief Oliver comes up with the plan that saves humanity, similar to how Jeff Goldblum and Will Smith do in Independence Day.  It seems that alien spacecraft can be destroyed by a well-placed rocket in the center core. 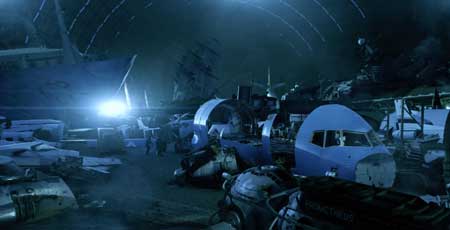 This movie boasts some good actors who were given a horrible script.  Director Nick Lyon (Species: The Awakening, Zombie Apocalypse) puts out pretty much a run of the mill SyFy movie known for horrible CGI, acting, writing, and everything else.  The music score was off with the pace of the movie, the CGI tentacles were laughable and very poorly done, and the actors could not force any chemistry with each other.   I don’t know why Linda Hamilton and John Savage felt the need to star in this movie after an impressive filmography that each hold but hopefully they will be remember for more memorable films.

If you are a fan of the SyFy originals, then this may be right up your coast line, but I think it’s one of the worst that has been produced and should have been sunk with the rest of those missing ships. 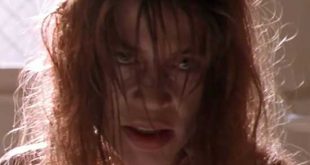 Linda Hamilton | What Ever Happened to?