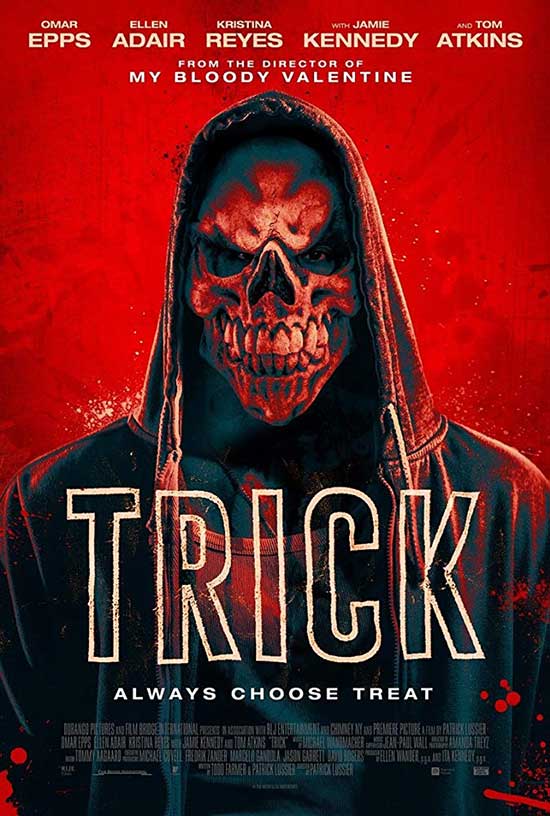 A detective becomes obsessed with stopping a masked serial killer known as “Trick” who pops up every Halloween and proceeds to go on a murderous rampage.

I’d heard a lot of buzz (both good and bad) about Trick before I saw it and I thought that it sounded like it was right up my alley. As most of you know, I’ve always been a huge slasher flick fanatic and have enjoyed most of screenwriter Todd Farmer’s work, so I went into it with some pretty high hopes. After everything was said and done, I’ll have to say that I enjoyed Trick very much and thought that it was just as good as I’d hoped it would be.

The premise just screams 80’s slasher flick and I definitely approve. The film starts off at a Halloween party and quickly becomes a bloodbath as Trick (who is one of the guests there) goes nuts and just starts killing the hell out of everyone in his general area. He is wounded during his attack and ends up at the hospital, which leads to yet another bloodbath as he kills several people as he makes his escape. He ends up disappearing and presumed dead, but for the next couple of years on Halloween guess what? He shows up and starts killing people all over again. Most people don’t believe that it is actually the same guy but a detective that was at the scene that first Halloween knows better and becomes obsessed with stopping him once and for all. Sound like fun? Trust me, it is. 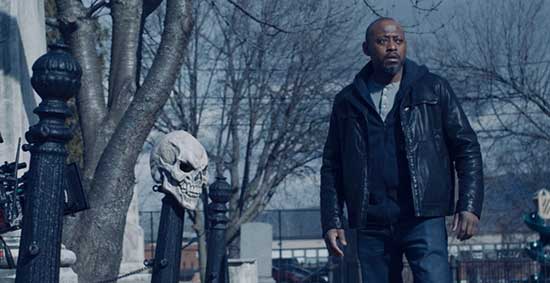 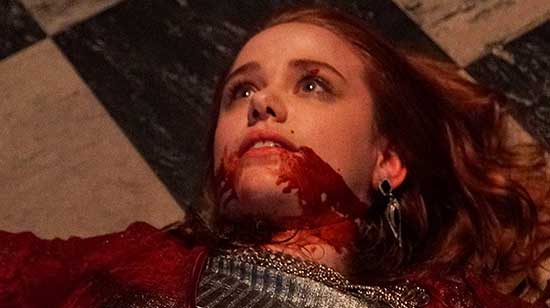 One of the things that really works for the film is that it moves quickly and there is almost always something going on. Not once while I was watching it did, I feel bored as it focuses more on bloody death scenes and action than it does trying to establish a subplot to go along with the main premise.

There is a bit of a subplot, but it isn’t anything major and is just as interesting as the main plot. Trick has an incredibly high body count as people are getting killed off left and right so if you’re into such things (like me) then you’ve come to the right place. I can’t remember the last time I saw a movie with so many death scenes in it and I couldn’t have been happier. I know some viewers might be turned off by this as they may be looking for something with a little more substance, but I dug it and thought that it was a lot of fun. It was nice to just turn my brain off for a little while and watch people get killed in a number of violent and gruesome ways. I’m not saying that this film is entirely brainless as it does keep you guessing and has a nice little twist toward the end, but all the deaths that take place as things progress is the main reason to watch it in my opinion. 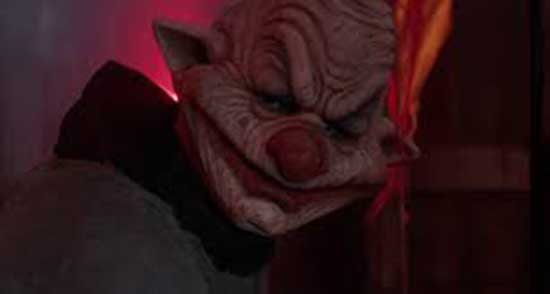 In a lot of ways, the movie is a giant nod to Carpenter’s Halloween. There are a lot of subtle references to it and I thought this was a nice touch. One of the biggest nods is Omar Epps’ character Detective Denver. Denver is essentially Sam Loomis in this movie as he is obsessed with finding and stopping Trick just like Loomis is when it comes to Michael Myers (Hell, he even shoots him five times at the beginning of the movie). While Denver may not be as crazy as Loomis, he is still mighty obsessed with him and I thought that this was cool. Epps does a great job bringing the character to life and as a result you really care about him and want him to make it out alive.

While I liked the little twist toward the end, I have a feeling that other viewers may not feel the same way. I don’t want to give anything away because I don’t want to spoil it, but Farmer does something a little different with the title character at one point that I personally thought worked but a lot of other people probably won’t. I actually saw it coming for most of the movie, so I wasn’t too horribly surprised when it is revealed but I still enjoyed it. I actually thought it was a pretty ballsy move for the most part as I have a suspicion that this twist is going to be the big thing that divides the audience into either loving or hating the movie as a whole and I have to applaud Farmer for having the guts to do it. If you’re like me, you’ll have a sneaky suspicion about what happens early in the film but as I said I thought that it was a good idea and I enjoyed it. 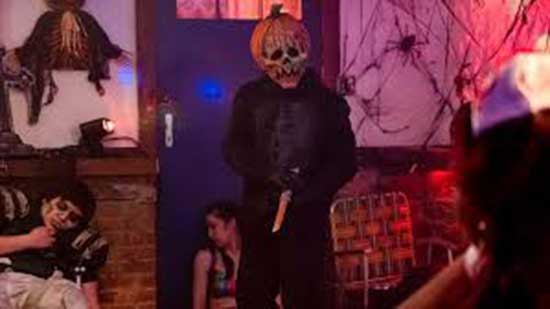 I really dug Trick and thought that it was an awesome, fun little love letter to Halloween and several other classic slashers. It is blood-soaked, has many brutal death scenes, and is just a great movie in general. If you’re into slasher flicks as much as I am then I think you are really going to enjoy it. Check it out when you get the chance, you won’t regret it.