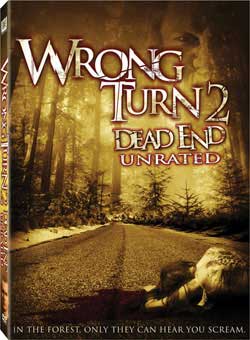 A survival reality show goes terribly wrong when the contestants accidentally stumble upon a clan of mutant hayseed cannibals eager to make a feast of the young TV stars who’ve ventured onto the flesheaters’ woodland turf. As the players begin to vanish, the survivors struggle to find their way out of the remote West Virginia forest before they become the next meal. Henry Rollins and Erica Leerhsen head the cast in this direct-to-video sequel.

QUICK FIX:
In this Direct to DVD sequel to 2003’s WRONG TURN, our group of hungry cannibalistic inbreeders in the woods of West Virginia get another buffet delivered to them on a silver platter in the form of young & good looking Reality TV show contestants. And, so that things won’t be too easy for our hillbillies to simply pick and choose items for their plate, the contestants just happen to be filming for a Survivor-type show, which is hosted by none other than Henry Fucking Rollins. Sure hope our old buddy Three-Finger remembered to pack the Rolaids…

RAMBLINGS:
Here we are again folks – sequel time. And a straight to the video store, lower budgeted sequel with different writers and a different director than the original to boot. Usually that can spell disaster on almost any front…I can’t help but recall Randy Meeks sitting there in his film school class with his film snob face on in SCREAM 2, when asked about sequels being any better than the originals, and every single one of the ones mentioned by other classmates he shoots down in flames with a prolonged, snotty explanation as to why sequels suck, and he got props for it. Well, f*ck Randy Meeks – that character is dead now so he can’t defend himself against my tirades anyway, because I loved ALIENS, I loved TERMINATOR 2, and I somewhat even liked CRITTERS 2, even more than their origin stories…so there, d*ck.

WRONG TURN though, is tough to beat. Yes, it’s a favorite of mine. And let’s face it – the poor bastard had a helluva time anyway…it was basically deserted by its studio after it was released theatrically and wasn’t promoted for sh*t. But, it found its audience anyway, mostly after its DVD release, and is considered by myself and others to now be a cult classic. So I was as surprised as anyone to learn four years later that a sequel was being made in any form at all, but even more surprised to find out that not only was it NOT a shameless, neutered cash-in on the original, but that it’s actually a very solid sequel that stands on its own and satisfies on all the right levels.

Erica Leerhsen always brings the talent and the hotness, and did her role of the cold-bitch-with-secret motivations who has to transform into a Ripley-style character perfectly. Oh, and did I mention she’s hotter than doughnut grease?? Henry Fucking Rollins sold me on his high-energy ex-military TV show host from the get-go….his bits were hilarious. And when push came to shove and it was time for him to go all Rambo on the killers, he was like a dozen tornados unleashed. American Idol hot stuff Caldwell is on hand as herself as well, which is not only funny, but very easy on the eyes. Not to mention we get the special treat of FREDDY VS. JASON’s….Jason…Ken Kirzinger, in a hilarious turn as the leader of the inbred clan, appropriately named Pa.

This was the directorial debut for Joe Lynch, and I haven’t heard anything out of him in the last two years since, which is a shame, because he kept the tone tense yet fun and energetic, and delivered a ride that you don’t get to see too often in DTV releases.

LAST WORDS:
Now this, my friends, is how you go about making a f*cking kickass DTV sequel. I will go out on a limb here (that I know I’m chancing getting hung from) and say that yes, WRONG TURN 2: DEAD END is in fact the right turn for you to take at your local video store or Amazon site…the body count is amped up, the kills are even more inventive, and yes, I think it’s every bit as darkly comical as the first one. It is unapologetically smutty and gruesomely funny, and I had a f*cking blast all the way through it. Yes, this movie is equal to and in some ways greater than the original. In fact, maybe I owe the late Mr. Meeks an apology, as I somehow have the feeling that even he would agree with me on this one.