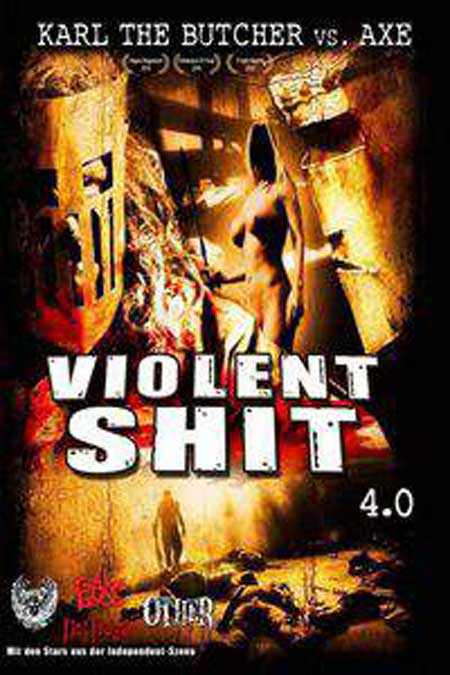 In a war torn post-apocalyptic future, Karl the Butcher faces off against a new ultra-violent serial killer, dubbed Axe

If non-stop, over the top blood and violence with a hefty side of raucous humor is your thing, then let me introduce you to horror/splatter director Andreas Schnaas. Since the early 90’s, Schnaas has been one of the top names in low budget gore films coming out of Germany, creating such classics as Goblet of Gore, Nikos the Impaler, and the titles he is probably best known for, the Violent Sh*t series.

Most recently, Schnaas has been teaming up with Timo Rose (the Mutation series, Game Over, and the upcoming remake of the Ted V. Mikels film, The Corpse Grinders) in a co-directing tandem. The team up has not only brought us the Unrated films, but also resurrected Karl the Butcher for the fourth installment of the Violent Sh*t trilogy (yep, you read that correctly), Violent Sh*t 4: Karl the Butcher vs Axe. 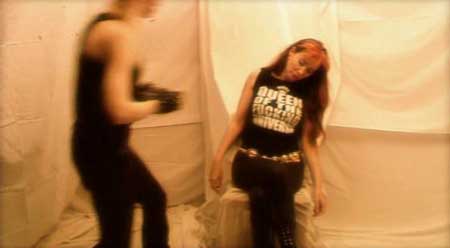 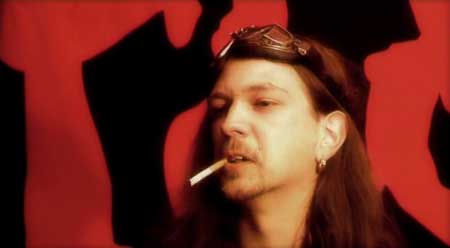 The year is 2023, and the world as we know it is wrecked. We’re talking post-apocalyptic nightmare here. Cities are in ruins, the population has been decimated, and the remaining people have formed gangs in order to survive. Now, you might be asking, “Didn’t Karl the Butcher get killed by ninjas in part 3? How could he appear in another movie?” There is a perfectly logical answer to this: rather than pull an Ilsa move (where she is killed, then somehow just reappears again and again as if nothing ever happened), we open in hell, where Satan asks Karl to return to Earth and kill a new powerhouse known as Axe. A nude blonde woman brings him his legendary mask, Karl the Butcher tears her head off, and despite the eleven years since the last Violent Sh*t movie, we immediately recognize that we are in familiar territory.

To say this film is over the top might be an understatement; this is the type of movie that will either win you over and keep you laughing, or drive you crazy and probably offend you. Here is the plot, in a nutshell: Karl the Butcher (played again by Schnaas) has returned to Earth, and people are scared. Meanwhile, Axe (Timo Rose) and his sister, Vendetta (Magdalena Kalley, from Game Over and La Petite Mort, and hopefully more sooner than later), roam the barren landscape, fighting various attackers and keeping each other safe. Numerous small nomadic gangs of survivors have heard word of Karl’s return and are preparing for battle.

These gangs include Gang Loco, an especially brutal group of dudes, and another, all-female gang, led by Queen Scara (Eileen Daly), that imprisons men and drains them of their sperm using a “Sperminator” machine that then brews up “sperm wine” for them to drink. While Mathra (Marysia Kay) is a loyal servant to the queen, She-Maa (Eleanor James, Red/Felissa from Slasher House) wants to run things and is constantly looking for a way to become the leader. There’s also Sgt. Reidel, the last German soldier on Earth, who seems dim-witted and clueless, but somehow always appears where the action is. Throw in some dark humor, lots of blood and guts and boobs, and almost constant, video-game style fight sequences, and you’ve got Violent Sh*t 4: Karl the Butcher vs Axe. 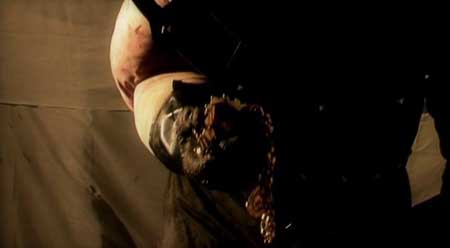 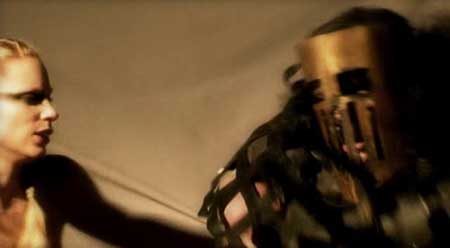 The title of this movie is somewhat misleading. While Karl the Butcher is sent back to Earth to fight and kill Axe, they very quickly become allies. There are two big reasons for this (I don’t think this is too much of a spoiler, seeing as it happens so early in the film, and besides, there’s plenty of other excitement in store later): for one, the two behemoths gain a mutual respect for one another after cooperating to fight off a separate group of attackers, and two, Axe realizes that he is Karl’s son, which then also makes Vendetta Karl’s daughter. It’s more like Karl the Butcher, Axe, and Vendetta take on the world, and they do a pretty great job of it. 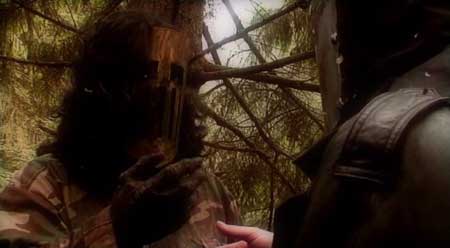 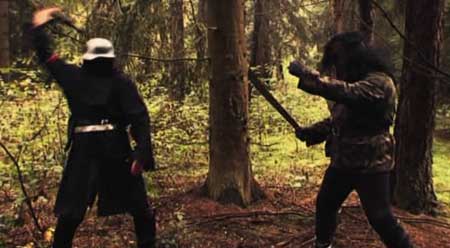 The violence in this movie is non-stop and brutal. Heads are knocked off, limbs are severed (as are genitals), and blood sprays everywhere. Everything builds up to a final battle sequence that lasts for a very long time – the movie clocks in right around 75 minutes or so, and the last 25 of that is the grand finale, with plenty of explosions and death and carnage for all.

I guess this is pretty much what you’d expect from a movie written and directed by Schnaas and Rose, after all. It really is a lot of fun. It’s easy to excuse the very loose semblance of a plot and just enjoy the action, and fans of the trilogy will notice the step-up in quality in this fourth film. Honestly, I’d recommend this film to any fan of horror or action movies, but I think the people who will love it the most are the hardcore horror fans, the ones who love the German splatter films and don’t mind a bit of nonsense included with their bloodshed.