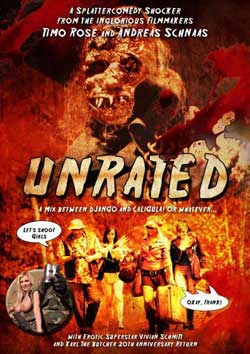 Frank is a filmmaker who brings a group of actresses to a cabin in the woods to make a film. While there they stumble upon a book, a book that belongs to the Book Keeper. The book is in no way an ordinary book, as it brings demons to earth, and now Frank and his actresses are the only ones to stop them.

Some movies are intentionally strange and some are just strange because the minds behind them are not all quite there. I had every intention to pass this one by as I couldn’t find any real element that seemed intriguing enough to invest the time into. Then as I was uploading trailers, it was the trailer that actually caught my eye enough to really save this one for myself. Sure low budget and cheesy are inherit here but it seemed like it might have a cool hellraiser-esuqe vibe to it. So onward I went.

You might just find yourself relating to the actors themselves who in their roles spend most of the film complaining about what a bad movie this is and the lack of normal production factors. The character director of the film is a little twerpy guy who urges 3 women out to the middle of nowhere with the intention of making a film. He has promised them a healthy undisclosed sum which seems to be the sole reason for them enlisting as actors. Though when they arrive at a run down shotzy looking cabin house, they begin to regret they ever took on the project. No, it’s not one of those typical psycho in the woods films. It’s actually quite the opposite.

The director is not all there but only because he shows up really without a script or a real premise. His preferred method is just walking around the house “at all times” with a camera in his hands. The women poke fun at him, complain to each other and get in the occasional cat fight followed by a lesbian act or 2. 2 of the stars of the film are quite well known and in which also seems to be an issue with the lack of accommodations. For lack of better reason, there never really ever seems to be a movie being filmed with a director that has never filmed a movie before. The girls begin to get nervous but more in discontent than anything. During this time, we learn that the director is gay and loves penis but hates vagina (his words). In fact women scare him altogether.  In one ridiculous scene he punches one of the lades for no apparent reason as they kindly return the favor back.

Meanwhile in the pits of hell, yep you heard right….. Satan or as they refer to him as the book keeper is on some sort of quest to unleash his demons. The house itself reveals  When the girls get creeped out by it and ask that it be put away, the director assures them that all is ok as he proceeds to use it in his film. We never really see a film in progress but we do see the book start to open up portals of hell. The portals release demon subjects who approach each individual base on their fears. Of course the gay director gets approached by a big breasted hottie who does a lap dance and tries to seduce him. The segment is just plain weird that is better seen than described. Other moments seem to have an almost Benny hill quality to them with weird bugs bunny like sound effects. A demon killer arrives and starts serenading his victim before he chops his trusty battle axe into the victim’s crotch.

I had to scratch my head more than once, but was anxious to get to the horror portions. If anything, the gore scenes and monsters are “out of place highlights” that are pulled off rather well. A “ball” cutting scene is gruesome and hard to watch followed by some pretty dead on dismembering moments. The monsters are amateur looking and yet original in that same token. 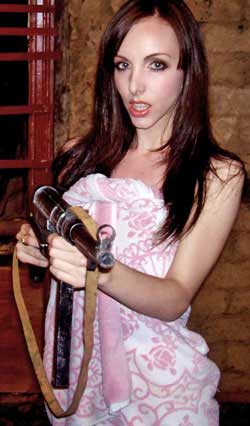 The prize at the end of the crackerjack box is the fantastic gore Fx work contributed by Andreas Schnaas. As a film it seems like a you have to wade thru alof of meaningless crap to get to the highlights of the film. But they do come in the way of a blood spattered masterpiece of carnage as the zombies, cretins and monsters get blown to bits, chopped and dismemebered per a topless Eleanor James.  Really, the idea is probaly best just taken as it’s served. A heavy analysis of this finale is not required. Boobs, blood and zombies…what more can you ask for!

As a recommendation, I’m really at wits end on this one. There is stuff that really worked for me, but the script is so damn weird you don’t know if it’s supposed to be funny or just a product of someone who doesn’t know anything about making films. Maybe it’s just too European feeling even though its spoken in English. Hey, don’t say I didn’t warn ya…..though this might just be the “hit of the party for being at times incomprehensibly dank.