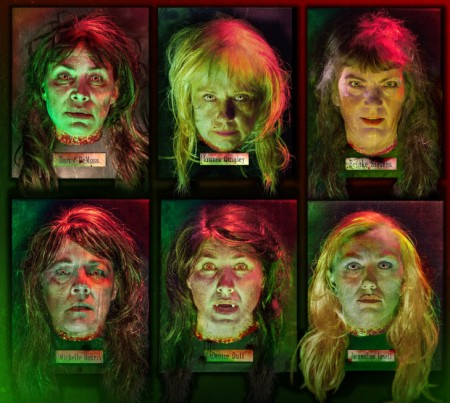 SYNOPSIS:
Six famous b-movie scream queens find themselves the target of a sick fan’s obsession with their films. One by one, they are kidnapped and forced to recreate the biggest death scenes of their career. Except this time, their very lives are on the line.

REVIEW:
Full Moon Studios producer-director Charles Band returns to the horror spotlight with the web series Trophy Heads launched to coincide, support and promote Full Moon Streaming. The series reunites six scream queens from past Full Moon films: Linnea Quigley, Michelle Bauer, Brinke Stevens, Darcy DeMoss, Denice Duff and Jacqueline Lovell. The film/series benefits from a simple concept and a focused, self-aware script. The film is very much in the vein of most all Full Moon Studio products – campy, tongue-in-check, silly, gory and fun. It is pure b-movie nonsense that horror fans have been deprived of since the fall of mom and pop video stores. This film is made for fans of those films, it will play far better for its target audience than it will for general horror fans or, perhaps even, modern horror aficionados. For those who fondly remember and are fans of Quigley, Stevens, Bauer and friends, this film will elicite smiles and memories; for those who are unaware of these scream queens and have yet to discover Nightmare Sisters, Sorority Babes in the Slimeball Bowl-O-Rama, Head of the Family and the Subspecies series, Trophy Heads is likely a goofy bore. 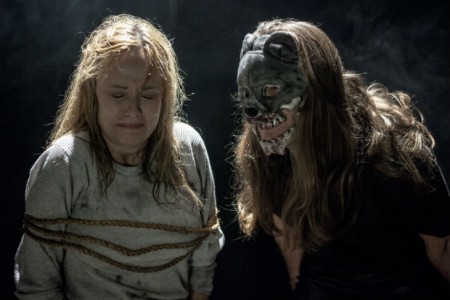 The script for Trophy Heads has an obsessed fan and wannabe film maker, Max (Adam Noble Roberts), out to create a new horror classic by bringing back the scream queens he adored in his youth back to the forefront of b-movie films. Along with his mother (Maria Olson), Max kidnaps six of his favorite horror actresses from his youth including Linnea Quigley, Michelle Bauer, Brinke Stevens, Darcy DeMoss, Denice Duff and Jacqueline Lovell. Max sets out to recreate his favorite death scenes with minor re-writes as the scream queens struggle to survive. After the scene plays out Max does Norman Bates one better by creating trophy heads of each victim, hanging their preserved heads on the wall. 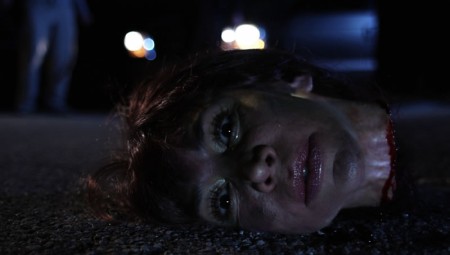 Charles Band manages to capture the best tone for this kind of film illustrating perfectly why his brand (Full Moon) was, is and will be so successful. The dialog is silly, but witty, and never goes too far off the rails. The threat of Max and his mother never becomes too undermined by the humor or goofy set pieces. Band also gets the most out of his actresses too, they wonderfully create slightly skewed versions of themselves, play off each other marvelously and provide fans another glimpse into what they love about their scream queens in the first place. He keeps the pace quick only diverging from the main plot to introduce the victims – perhaps, spending a little too long on an audition scene with cameos from the likes of Stuart Gordon. To no surprise, Band seems to capture translating his b-movie formula from full length feature to episodic web series presentation with the same fervor and tone.

But, really, that is not what Trophy Head’s target audience is after. It is the scream queens that are the draw and they deliver.

It is difficult not to smile as these lovely ladies banter back and forth, fondly (and often not-so-fondly) recall their films as they sit in their cells waiting the inevitable turn facing their captors. Linnea Quigley’s version of herself is now a born again Christian trying desperately to have her friends convert but only succeeding in irritating them and alienating herself. Michelle Bauer shows she still has spunk and attitude and can scream obscenities like no one else. Jacqueline Lovell and Denice Duff steal the show as two bickering starlets continually trying to one up each other and prove they are the better actress. The more the film concentrates on these fine ladies, the more it succeeds. 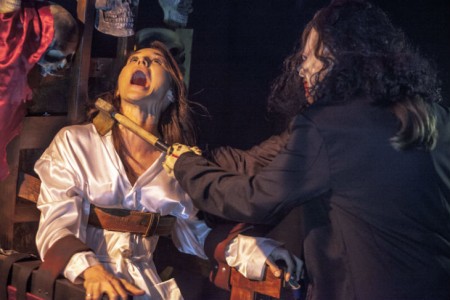 Much like Max’s obsession where he want to both remember the scream queens at the height of the glory and ensure they will never be forgotten, Trophy Heads manages to illustrate his point that there is still a place for Band’s beloved scream queens in modern cinema and that they should not be forgotten. The film’s charm is wrapped up in this notion where the more the audience connects with those memories and these actresses, the more it will succeed. While the web series is light on the gore and the scares, it delivers a delightful sense of humor and purpose once it moves to Max’s trophy room and the severed, mounted heads continue to dialog with their captor after they are dead. These scenes end up being some of the best in the series providing smiles aplenty and a few laughs. 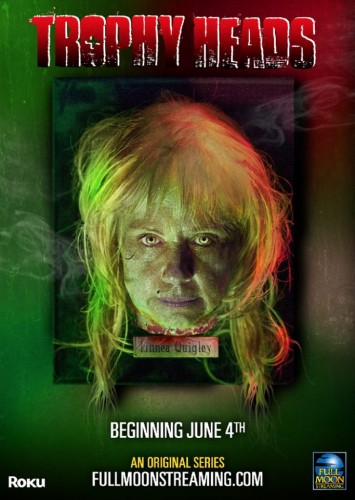 Trophy Heads is a terrific experiment from Full Moon, one that shows great promise that this company may be able to embrace the changing cinematic landscape and position itself a leader of b-move flicks once again. The web series suffers from its limitations in scope and budget making it feel incomplete or underdeveloped, but it also manages to rise above that to illustrate both a passion for this style of film making, the scream queens themselves and for the new media opportunity looming on the horizon. If nothing else, Trophy Heads ushers in great promise from Charles Band, Full Moon and b-movie horror. Long live the scream queens, and, please, come back soon.