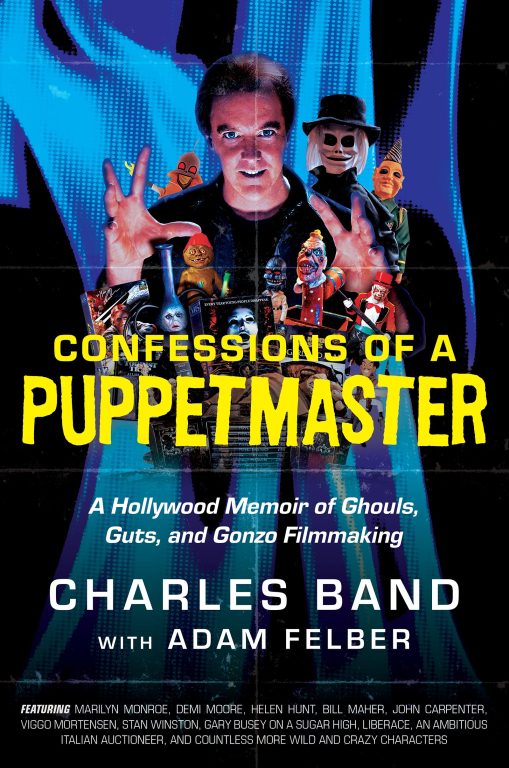 CONFESSIONS OF A PUPPETMASTER

The career of Charles Band has been way crazier than any of his Full Moon Features or Empire Pictures projects. Here’s the guy who kickstarted a chunk of the home video era, made films like Puppet Master, Ghoulies and Tourist Trap (a favourite of Stephen King, no less), bought a castle, raised a rock star and gave a start to some of the biggest names in Hollywood. It’s a career that has kept him busy since the 1970s and on that has only got more delightfully weird as the years have passed.

Unlike some autobiographies, Confessions of a Puppetmaster does indeed feature some eyebrow-raising confessions amongst the ups and downs of life as a filmmaker. Band has been around movies his entire life, growing up around productions helmed by his dad. This clearly set him up well mentally to face the challenges of fickle studios, crazy cast members and juggling productions lensed in the US, Romania and Italy.

The book reads at a hell of a pace due to a conversational style that really comes across as Band speaking directly to you. It’s not as in-depth in regard to the actual filmmaking process as It Came From the Video Aisle was, and that’s cool as this is about our plucky hero Charlie and the many, many things he has been involved in. I consider myself an avid fan of Charles Band and the films he has been a part of, but his boom really did surprise me with a lot of stuff that I hadn’t heard before.

While it has been co-written with Adam Felber, I must say that it’s a seamless marriage of Charlie’s excitable big kid enthusiasm (which for me brought Forrest Ackerman to mind on several occasions) and Felber’s talent for uncluttered, direct prose. Even if you’ve never seen a Full Moon or Empire movie, this book is a treasure chest of experiences from the exploitation movie days, up through the highs of the Empire, um, empire and through the video days up to our current world of streaming services.

An element I feel is a little lacking in the book is the material on the actual making of the films themselves. There are some fantastic on-set anecdotes and memories, but I didn’t really get a sense of what an actual shooting day, office day or postproduction session would be like with Band at the helm. That’s a small thing though, as there are so many stories of career highs and lows it’s impossible not to be entertained. In that sense it’s very much like Band’s movies – there’s always entertainment value to be had.

There are some very endearing stories too, such as the idea of the Full Moon roster of titles being a shared universe, akin to what the MCU would one-day become. The inspiration? Marvel Comics. I know there have been some FM crossovers, but I would have loved to see more. Imagine Jack Deth showing up in a PuppetMaster film, or Killjoy facing the Head of the Family!

With such a catalogue of films with his involvement, there will always be fans wishing their favourite was mentioned (for me it’d be Arcade), but this book is such a fun ride that I can forgive him. For all of his showmanship, Band has been a pretty private guy while making crazy things with crazy people. This book certainly shows off his enthusiasm for horror movies, sci-fi and films that are just plain fun, but it also shows us his vulnerabilities and worries, which he presents in a frank and at times moving fashion.

This is an absolute must-read for any fan of genre cinema, or indeed filmmaking of any kind.