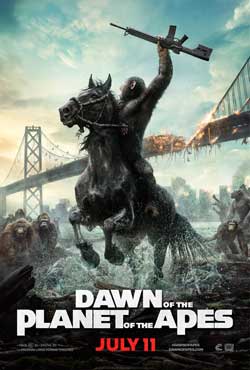 In 2011, director Rupert Wyatt did what some thought would be impossible, he resurrected the Planet Of The Apes franchise from the dead. A feat deemed impossible after director Tim Burton had essentially ground it into the dust with his ill advised Planet Of The Apes reboot film ten years earlier. Thanks to a very effective script (by Rick Jaffa & Amanda Silver), some outstanding digital witchcraft from WETA Digital & the performance of Andy Serkis, Rise Of The Planet Of The Apes became a surprise critical & financial hit. Now 3 years later, director Matt Reeves (Cloverfield/2008, Let Me In/2010) has taken over the franchise for the sequel entitled Dawn Of The Planet Of The Apes. But even with a script from the returning Jaffa & Silver (with assistance from Mark Bomback), and an audience that’s expecting a good film, is this sequel as good as the last film?

Opening exactly where the last film ended, with the “Simian Flu” spreading across the globe and some expertly edited snippets of various politicians, newscasters & footage of people being quarantined a/o dying, Dawn Of The Planet Of The Apes (“Dawn” for the rest of this review) immediately lets the audience know that things did not go very well for mankind after the virus was accidentally unleashed into the world. Taking place 10 years after the initial outbreak, it seems as if there aren’t any humans left at all. Caesar (Andy Serkis) and his group of simians have forged a simple yet happy life for themselves in the woods outside of San Francisco. During the introduction to this simian society, it’s mentioned that no human has been seen in the last “Two Winters”, leading the apes to believe that there are no humans left. But not long after this idyllic introduction to the ape society, humanity once again intrudes and creates havoc for both the apes & themselves.

Carver (Kirk Acevedo) is found wandering in the woods by a group of apes. He’s part of a small group led by Malcolm (Jason Clarke) who are trying to make their way towards a small dam that has been shut down for years and is the only way to get some form of energy back to the small settlement of humans (Who are genetically immune to the Simian Virus) that are living in the ruins of what was once San Francisco. Carver shoots and kills one of the apes and is immediately beset by Caesar & his army, but Malcolm manages to convince Caesar that it was an accident and even talks his way into getting into the control room of the dam in order to repair it. Caesar feels that Malcolm is honest and they agree that once the dam is repaired, humanity can have their precious power – as long as they never intrude upon the forests that the apes call home ever again. Although it starts out relatively well, factions from both sides harbor deep distrust for each other & despite his insistence that apes are not like humans because apes are “Family”, Caesar soon finds out that some apes are just as misguided & evil as some humans are.

First off, let’s just put the debate to rest and say that Andy Serkis was indeed worthy of an Oscar nomination for Rise Of The Planet Of The Apes and is even more worthy for his performance here in Dawn. It’s obvious that the 10 years that have passed since the last film haven’t been easy ones for Caesar as he looks/feels a bit world weary & tired. Yet his pride & trustworthiness are readily on display and Serkis has mastered the art of emoting in a digital performance. He gives a sensational & at times heart rending performance here that the academy must acknowledge next year. Toby Kebbell gives Serkis expert support as Koba, Caesar’s right hand man, who is distrustful of all humanity because of the tortures he was put through as a lab monkey years earlier. In one standout scene, Caesar tells him that he is allowing the humans to do their “Work”, to which Koba repeatedly replies “Human work”, as he points out the multitude of scars left upon his body from the experiments he was subject to. It’s a sad yet chilling scene played to the hilt by both actors. 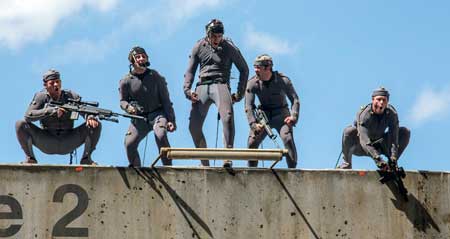 Dawn is full of scenes like that one and all involved expertly essay their roles. Gary Oldman plays Dreyfus, Malcolm’s counterpart to Caesar’s Koba. Dreyfus is the leader of the conclave of humans left alive and knowing that they only have a few weeks left of fuel to power their lights, he’s desperate to get the dam up & running again in order to get power to the group & maintain his hold over them. But he differs from Koba in that he doesn’t resort to dastardly tactics to achieve his goals. He’s indeed distrustful of the apes and doesn’t believe that they can co-exist with man, but his intentions are sincere. And although Koba is a good deal more sinister than Dreyfus is, he too only wants what he feels is best for his fellow apes. This creates the majority of the tension in the film and audiences will find themselves sympathizing with both sides throughout.

The digital work on display here by Weta Digital is beyond compare. I was a bit dubious after watching a few of the early trailers for the film, but I was wrong. This is simply the best CGI/Digital work I’ve ever seen in a film. There were moments when I just flat out forgot that I was watching a film that had digitally created apes (Of all shapes & sizes) carrying the movie, they’re that convincing. And as the film progresses, the digital setpieces get more & more grandiose but the apes never lose one iota of their beauty, their naturalness. I saw the film in IMAX/3D and while there were a few moments where the 3D made for some effective scenes of depth perception, I don’t think the film fully takes advantage of the format, hence I don’t see it as being something you must see in 3D to fully appreciate. It still looks great regardless. 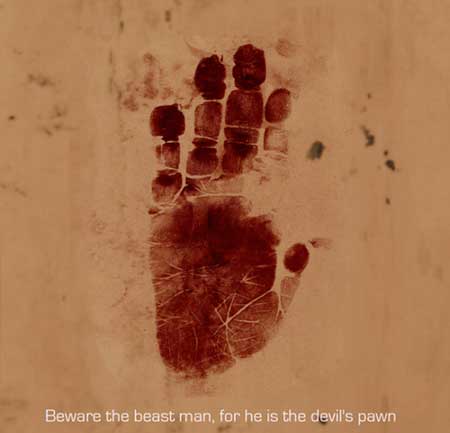 Dawn runs for about 130 minutes and while it never really slows to a halt, there are a few scenes that feel a bit forced (especially in the film’s second half). But it never takes a backward step and remains completely engrossing & about as believable as a film about a war between apes & humans could possibly be. The final battle is epic in stature and eye wincingly brutal to watch at times, but it all serves a purpose and while it isn’t a bloody mess, it is violent and might disturb some younger children. And it all ends with the promise of an even greater war on the horizon. A war that Caesar seems relegated to fight, although he doesn’t want to. The final image of the film actually sent a chill down my spine! Not out of fear, but out of anticipation of how awesome the next film in the series might be (Reeves has signed on to direct the next installment).

I could go on & on about how flat out awesome I thought this movie was but I’d much rather you saw it for yourselves. Dawn Of The Planet Of The Apes builds on the story of the previous film both logically & rationally, never losing sight of the fact that the characters are what make the film so compelling. It would’ve been very easy to make a film where the apes and humans just slugged it out for two hours (Look at films like the execrable Transformers: Age Of Extinction for examples of that kind of film making). But Reeves and company had something far better in mind and have crafted an intelligent, heartfelt & moving parable about the ugliness of war & those who must suffer through it. It’s easily one of the best films of the year and one of the best sequels ever produced as well. 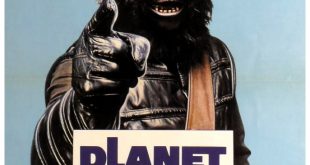