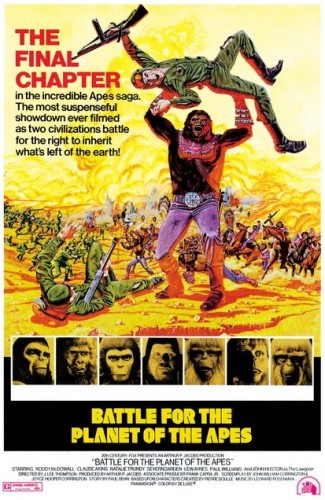 “After conquering the oppressive humans in Conquest Of The Planet Of The Apes, Caesar must now keep the peace among the humans and apes. Gorilla General Aldo views things differently, and tries to cause an ape civil war. In the meantime, other human survivors learn of the ape city, and decide they want to take back civilization for themselves, thus setting the stage of warring ape factions and humans.”

Largely derided as the least of of the five original Planet Of The Apes (1968) films, Battle For The Planet Of The Apes (1973) focuses on character rather than the dark action of Conquest Of The Planet Of The Apes (1972). We are now in a post-nuclear era and Caesar is leader of an ape society established in their own ape city after the expected destruction of human civilisation in World War Three. The apes become involved in a war with a group of mutants living in the ruins of a nearby city who have joined forces with militant gorillas, and the battle of the title is between Caesar’s community and the mutants. 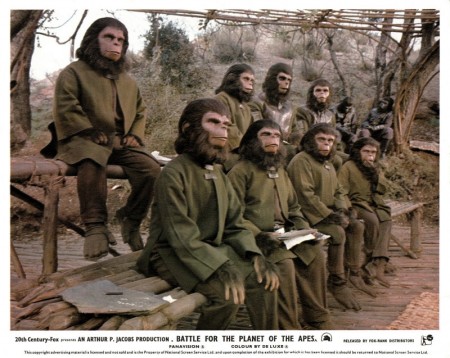 This fifth and final film was again directed by J. Lee Thompson, and written by husband-and-wife team John William Corrington and Joyce Hooper Corrington, who were responsible for shredding…I mean, re-writing Richard Matheson’s I Am Legend for Chuck Heston’s Omega Man (1970). Although considered the worst of the bunch, Battle For The Planet Of The Apes features the most intriguing casting of them all. 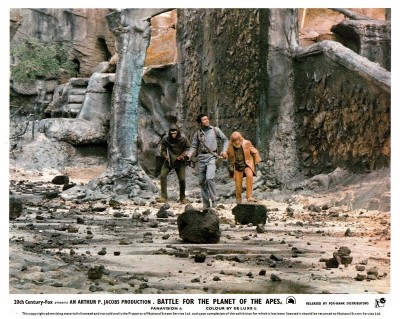 Not only do we have the usual suspects Roddy McDowall and Natalie Trundy as his loving wife Lisa, but we also have:

* John Huston – One of Hollywood’s greatest filmmakers, also helped make Anjelica Huston.
* Lew Ayres – An amazing 150 roles from All Quiet On The Western Front (1930) to Buck Rogers In The 25th Century and Hart To Hart.
* Claude Akins – A television staple in shows like Combat, Laredo, The Waltons, B.J. And The Bear, The Misadventures Of Sheriff Lobo.
* David Gerrold – One of America’s best science fiction authors, one of Star Trek‘s most influential contributors, creator of tribbles, and writer of the novelisation of Battle For The Planet Of The Apes.
* Paul Williams – One of America’s greatest songwriters could also be seen in Phantom Of The Paradise (1975), The Muppet Movie (1979), and The Loved One (1965), in which he played a ten-year-old boy…at the age of 25!
* John Landis – One of Hollywood’s genuinely funny filmmakers who directed and starred in his first ever feature film that very same year, Schlock! The Banana Monster (1973), in an ape costume built by makeup maestro Rick Baker. 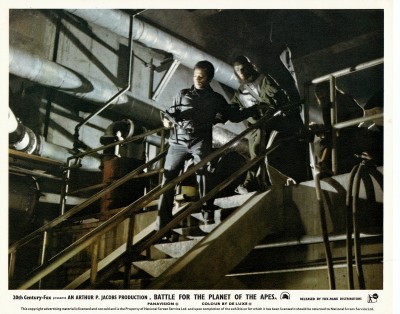 Also worthy of special note is actor Severn Darden, who reprises his role of Governor Kolp, first seen in Conquest Of The Planet Of The Apes. Originally a comedian out of Chicago, Darden was a major influence on the comedy stylings of The Second City. Darden appeared in various movies and television series, but his best performance is probably in The President’s Analyst (1967) as Kropotkin. An early film entitled LUV (1967) in which he played a drug dealer alongside Jack Lemmon, Peter Falk, Elaine May and Nina Wayne. He was also a semi-regular in The Monkees television show and the respected-but-befuddled college dean in Real Genius (1985). Oh, I’ve digressed again, haven’t I? 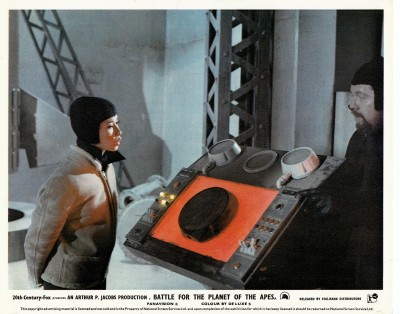 Back to the subject at hand, the titular battle in Battle For The Planet Of The Apes is well-handled but there’s an air of pointlessness about the entire film, as if everyone knows that this is the last attempt to wring a few remaining dollars out of the Planet Of The Apes phenomenon. Typical Hollywood. Enough crying over lost opportunities, please join me next week when I have another opportunity to give your cinematic sensibilities a damn good thrashing with the ugly stick for…Horror News! Toodles! 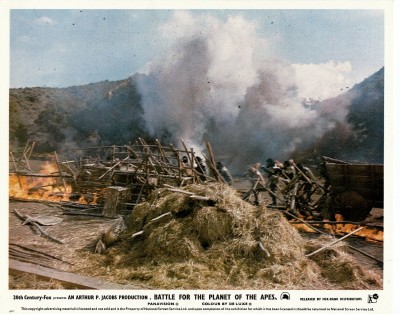