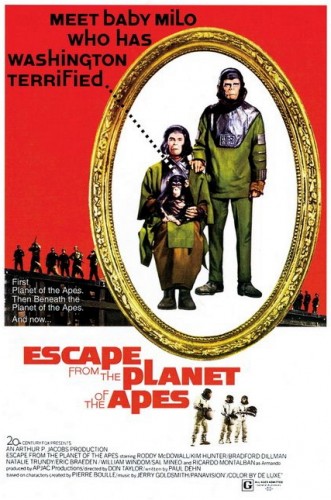 “Cornelius and Zira, the simian ape couple from the first two ape films, flee from their doomed planet (after the events in Beneath The Planet Of The Apes) in the same spaceship used by Taylor in the first film, and travel back through the same space/time porthole and land on late 20th Century Earth where they are received with fascination and fear from the people they meet.” (courtesy IMDB)

With the planet flambéed at the end of Beneath The Planet Of The Apes (1970), it was time to go into the past, bringing the franchise to a budget-friendly modern-day Earth. This was hardly an innovative idea – the 1967 television show It’s About Time, about two astronauts who find themselves trapped amongst neanderthals in the prehistoric past, resolved their budgetary problems by simply moving the astronauts and their neanderthal companions to contemporary USA in their second season. Star Trek IV: The Voyage Home (1986) would do the same thing, halving their budget by setting it mostly in modern-day San Francisco. But I digress.

Escape From The Planet Of The Apes (1971) begins with three of the apes arriving in present-day America having escaped the holocaust by traveling back in time, via the same time warp, in the astronaut’s salvaged spaceship. The three intelligent apes, Zira (Kim Hunter), Cornelius (Roddy McDowall, returning after his noticeable absence in part two) and Milo (Sal Mineo in his final film role) are at first celebrated by society and treated like visiting royalty, but when it is learned that Zira is pregnant, they come to be regarded as a possible threat, and these fears are exploited by an ambitious Presidential candidate played by Eric Braeden, last seen in Colossus: The Forbin Project (1970).

After Milo is accidentally killed, Zira and Cornelius decide to hide out from the authorities and are given refuge by a kindly circus owner (Ricardo Montalban). Zira gives birth to a son, but she and cornelius are later tracked down and shot to death by the authorities. However, their offspring is rescued by the circus owner and the film ends with the infant ape saying “Mama, mama,” mimicking the human talking doll found near the end of Planet Of The Apes (1968).

While this film isn’t as satisfying as the original, it does have its charms, mostly by showing us more of the relationship shared by Kira and Cornelius, and the film is carried well by both Kim Hunter and Roddy McDowall. Highlights include testifying to the governmental investigation committee, and Zira humouring the mild-mannered scientists on their rudimentary intelligence tests and, when they wonder why she won’t claim her prize, she exclaims that she loathes bananas. Not exactly “Get your stinking paws off me, you damn dirty ape!” but an amusing alternative nonetheless. Another delight is Ricardo Montalban’s appearance near the end of the film as the circus owner Armando, but unfortunately is not given much to do. 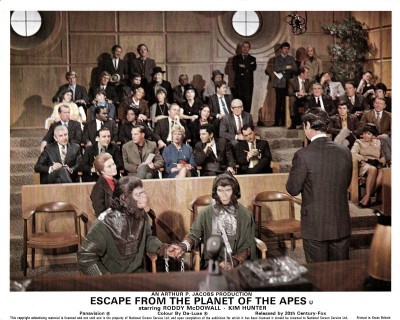 Oops, I’m getting a little ahead of myself there – at this point I’ll ask you to please join me next week when I have the opportunity to expose the very tenderest parts of your body to another jaw-dropping journey through those damnable dank dells of Horrorwoodland for…Horror News! Toodles! 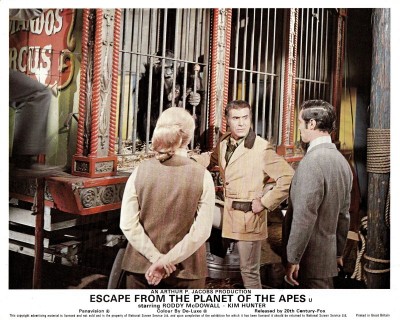