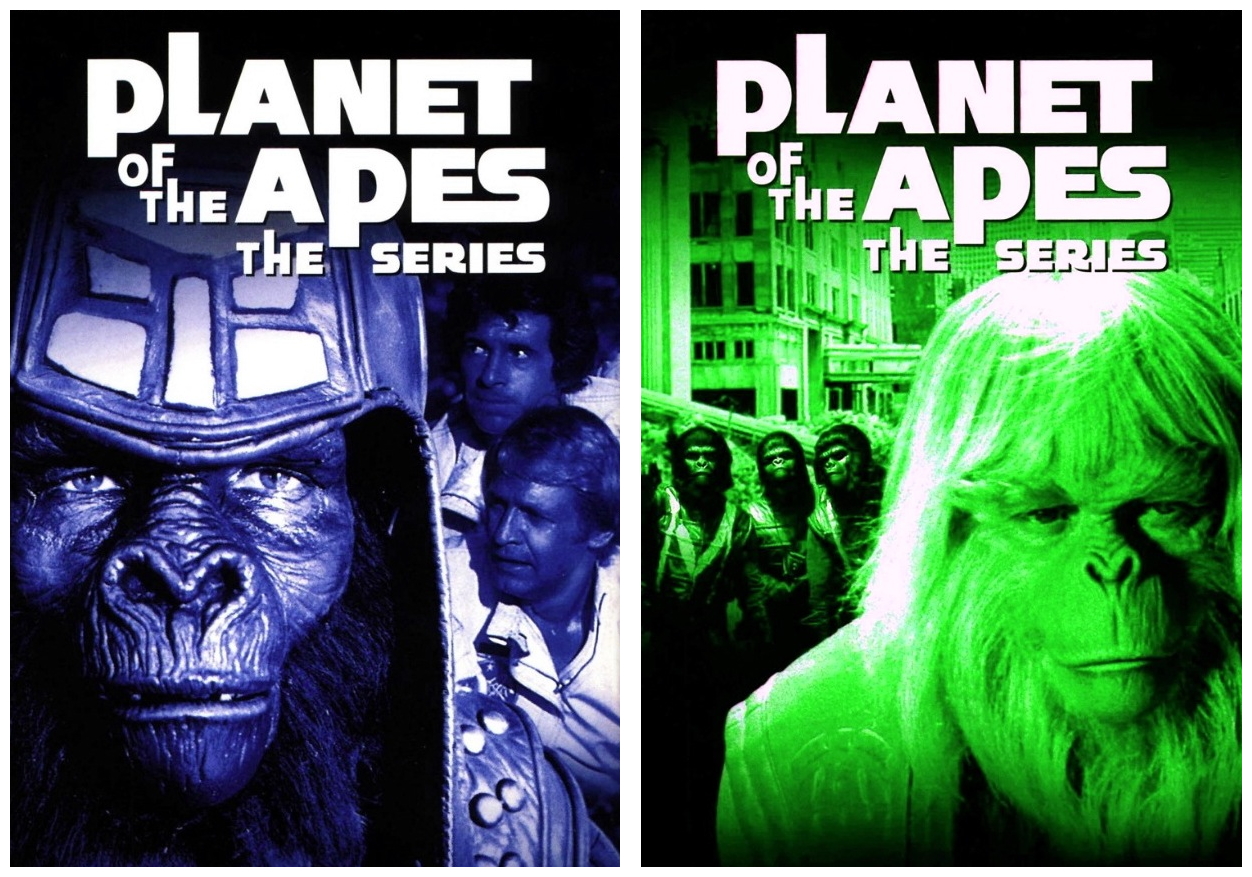 Pierre Boulle‘s novel Monkey Planet was given the big-budget wide-screen Hollywood treatment as Planet Of The Apes (1968), and its only virtues are the result of money spent. The final script by Rod Serling and Michael Wilson – about Earth astronaut George Taylor (Charlton Heston) who crash-lands on a planet ruled by tyrannical talking apes, only to become the most rebellious of all the non-talking human slaves – may seem a little juvenile to modern audiences. The writers get away with dozens of cliches and the most simplistic of moralistic statements just because they seem different coming from people in monkey costumes. Franklin Schaffner‘s direction of the actors is rather flat, but he exhibits some visual flair when filming action sequences and landscapes. Bare-chested Heston is a solid muscular hero, a good choice to play the symbol of human superiority who is humbled when he is to be experimented on by the apes, just as humans experiment on apes back home on Earth. 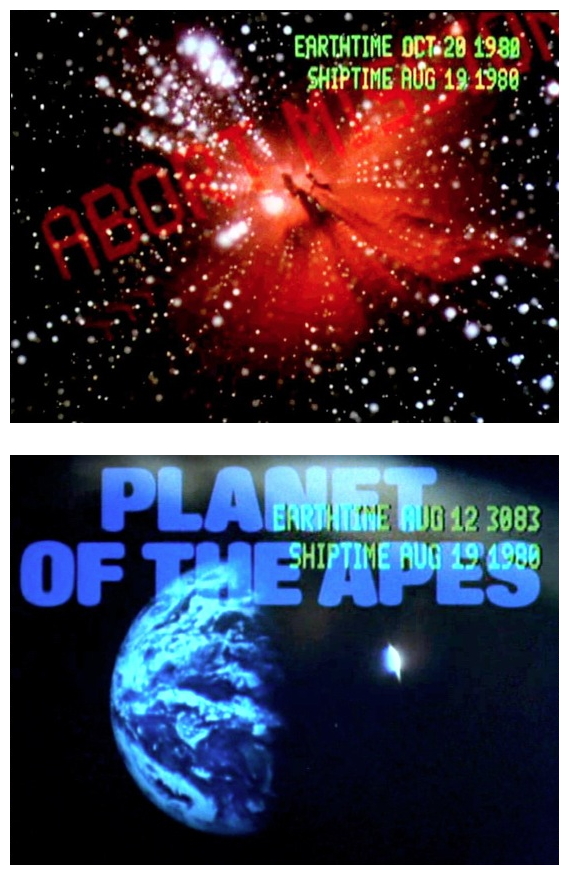 The film’s predictable ending is like something out of a Twilight Zone episode, as Taylor confronts one of the most iconic (and re-used) images in science fiction, the half-buried Statue of Liberty, proving that he’s been on Earth all along. It was an international hit with both audiences and critics at the time, winning a special Oscar for John Chambers‘ makeup effects and spawning four sequels: Beneath The Planet Of The Apes (1970); Escape From The Planet Of The Apes (1971); Conquest Of The Planet Of The Apes (1972); and Battle For The Planet Of The Apes (1973). 20th Century Fox persuaded the movie-going public to ‘Go Ape!’ – cinemas and drive-ins ran ten-hour marathons of all five movies and audiences went bananas for it! As usual, television executives were keeping a watchful eye out for hot properties that could be whipped into a successful series, so it came as no great surprise when the CBS network latched onto the idea of a series based on the films. 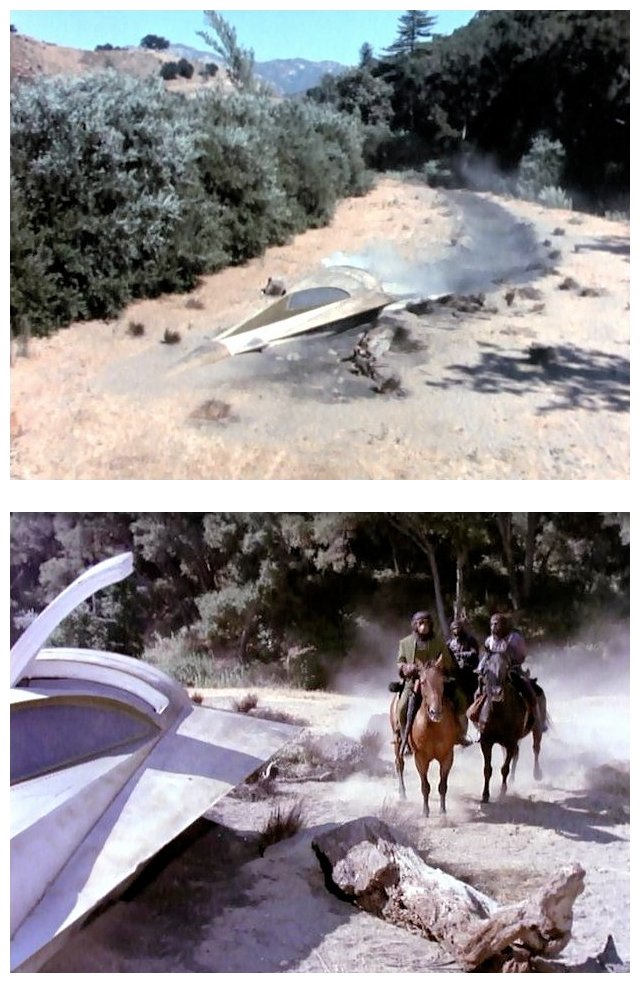 Former child actor Roddy McDowall starred in four of the five films, and his name and voice had become synonymous with the franchise. As a result of the arduous three-hour makeup job required to turn the human actor into his chimpanzee counterpart, McDowall’s face was insured for US$1 million with Lloyd’s Of London. The plot of the TV series was somewhat similar to the first film: two 20th century astronauts (Ron Harper and James Naughton) pass through a time warp and crash on the monkey planet. Forced to flee from the ape authorities – led by orang-utan Councillor Zaius (Booth Coleman) and gorilla Security Chief Urko (Mark Lenard) – the humans attempt to find a way back to the 20th century with a little help from their chimpanzee friend Galen (Roddy McDowall). Series producer Herbert Hirschman gave the power of speech back to the enslaved human populace, partly to make the writer’s job easier, but mainly because it was assumed that the guest stars might like to have some lines of dialogue. 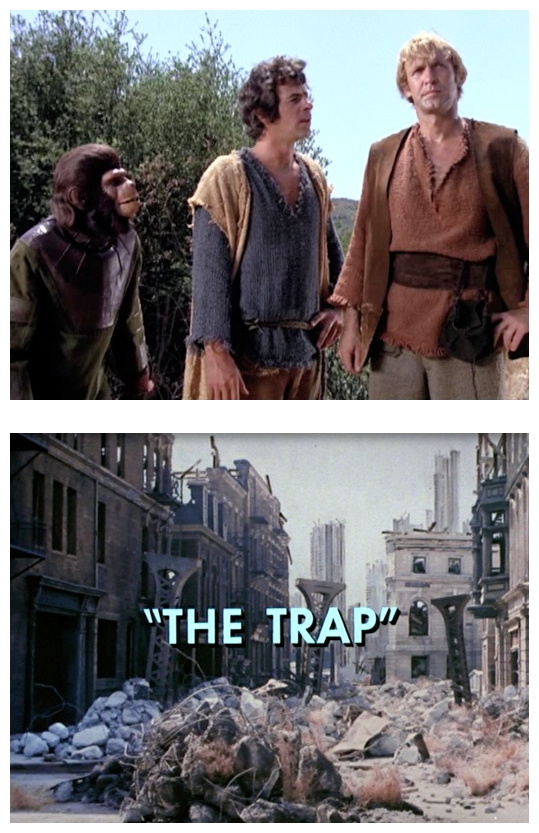 The formula seemed sound enough – if the movies could succeed, the TV series should too, right? Wrong. The Planet Of The Apes TV series debuted on the 13th of September 1974, and came to an abrupt end on the 20th of December. Thrust a thousand years into the future when their spaceship passes through a time warp, astronauts Alan Virdon (Ron Harper) and Pete Burke (James Naughton) find the world has been turned upside-down – the apes are the rulers, humans are no better than menial slaves, and technology is virtually non-existent. The main narrative of the series is of the apes pursuing the astronauts, whose superior knowledge could destabilise the simian society and threaten the ascendancy of the apes. Meanwhile, Virdon and Burke cling to the hope of finding a way to get back to their own time. Essentially aimed at providing action entertainment for a family audience, the series retained some of the flavour with observations on mankind’s morality, prejudices and fears through the creation of the ape society in which orang-utans are the ruling class, gorillas are the muscle-headed enforcers, and the chimpanzees are the intellectuals. 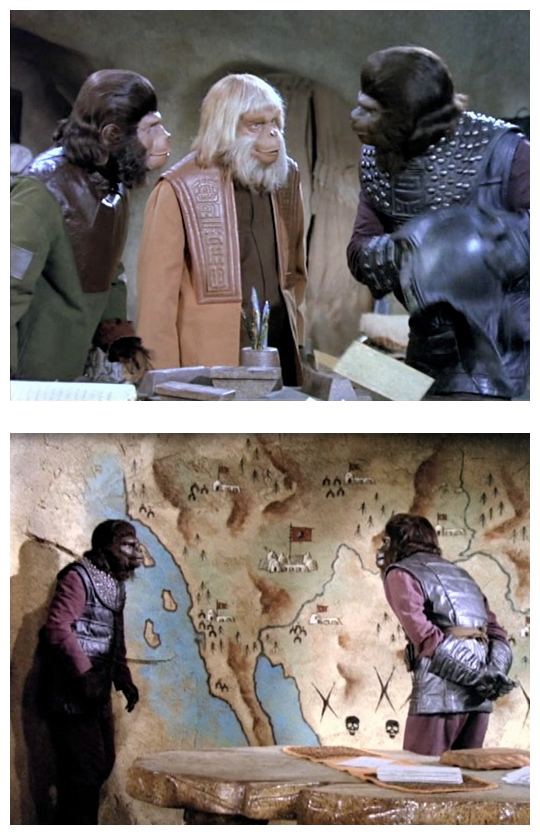 This aspect was not lost on the critics who gave the show their blessing. Back in the seventies the average syndicated series ran about a hundred episodes, but shorter series, those that ran for only two or three years, also popped up occasionally. The original Battlestar Galactica, for instance, with only twenty-one hours, managed to secure a once-a-week slot in syndication, but it seemed very unlikely that a series which only ran less than half a season would ever be repeated. After holding onto the episodes of Planet Of The Apes for five years, 20th Century Fox decided to edit the one-hour shows into TV movies and sell them as additional Ape movies. TV stations around America had been screening the five feature films in a ‘Planet Of The Apes Week’ format. It dawned on Fox executives that they could get ten episodes back on the small screen in the form of a second set of Apes movies, giving TV stations a chance to ‘Go Ape!’ for another week. 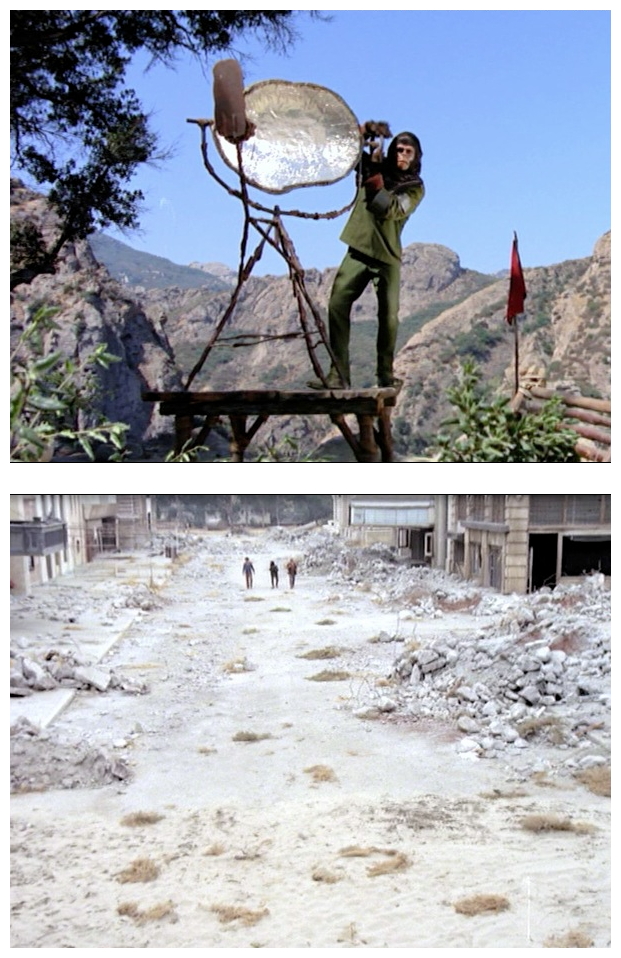 * Back To The Planet Of The Apes (1980) utilises the episodes Escape From Tomorrow and The Trap. This first film starts off with the pilot episode wherein astronauts Virdon and Burke crash on Earth a thousand years from now. The astronauts befriend a chimp named Galen who helps them to escape. In the hope of finding a way to get back to their own time, they search for a computer in an earthquake-threatened city. With the computer, they can play back their flight records.

* The Forgotten City Of The Planet Of The Apes (1980) utilises the episodes Gladiators and Legacy. The trio are forced to become involved in the strange gladiatorial games of a district run by Prefect Tolar (William Smith). Galen, Burke and Virdon barely escape the gorilla police and find an abandoned government research project with a computer containing a vast amount of recorded information about the human-ruled world. 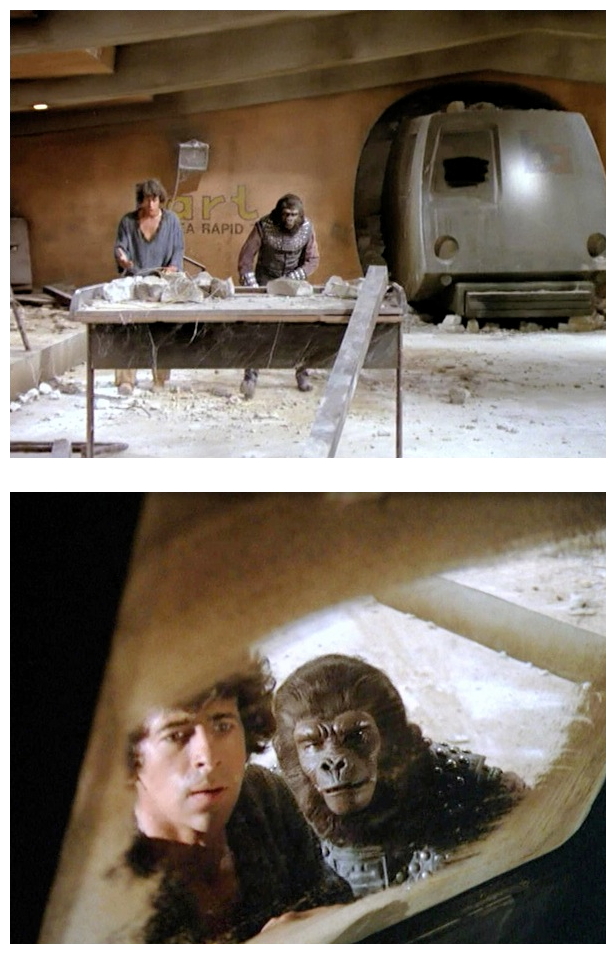 * Treachery & Greed On The Planet Of The Apes (1980) utilises the episodes Horse Race and The Tyrant. The fugitives try to save the life of a human blacksmith and his son, who gorilla leader Urko has threatened with death should his horse lose another race. The trio also attempts to expose a crooked gorilla (Percy Rodrigues) by framing him in a plot to kill Urko.

* Life, Liberty & Pursuit On The Planet Of The Apes (1980) utilises the episodes The Surgeon and The Interrogation. Virdon is shot, and Galen must charm an old flame (Jacqueline Scott) into accepting that a book on human surgery is not a hoax. Meanwhile, Burke is captured by the ape authorities and is to be brainwashed by a brilliant ape scientist named Wanda (Beverly Garland).

* Farewell To The Planet Of The Apes (1980) utilises the episodes Tomorrow’s Tide and Up Above The World So High. After escaping from a forced labour camp, the trio becomes involved in a plot to develop a hang-glider to drop a fragmentation bomb on the gorilla council. 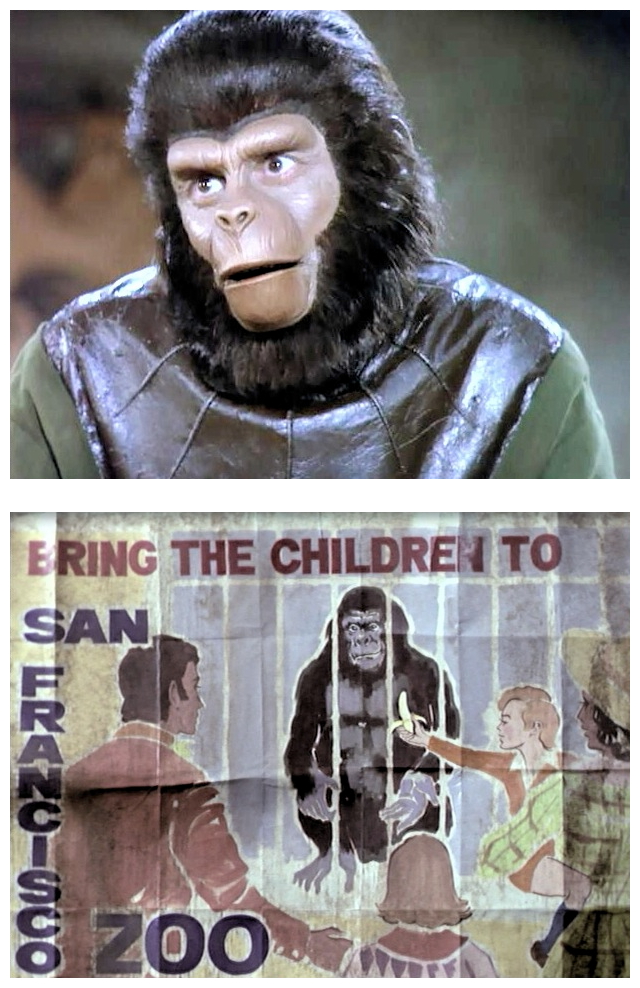 While the new package of Apes telefilms began to make its way around the country on local TV stations, an interesting scheme was hatched by the ABC-owned stations to make their presentation a little more special and original, and hired Roddy McDowall to recreate his role of Galen to tape new footage for the presentation by the ABC stations entitled The New Planet Of The Apes. The footage created by Fox to open each feature was scrapped and replaced by McDowall as the now-aged Galen recalling his exciting adventures. Each ‘chapter’ of the five-part presentation opened and closed with a monologue by Galen. The success of the package almost resulted in other axed seventies science fiction series being re-released in the form of syndicated TV movies, and shows like Fantastic Journey, Logan’s Run, Man From Atlantis and Spider-Man were considered, but then the home video market was beginning to open up. Hundreds of forgotten TV shows found new life on video in the early eighties, many developing cult followings and leading to a spate of remakes, reboots, re-imaginings and feature-film versions that we’re still witnessing today. Right now I’ll simply request your presence next week when I have the opportunity to present you with more unthinkable realities and unbelievable factoids of the darkest days of television, exposing the most daring shriek-and-shudder shock sensations to ever be found in the steaming cesspit known as…Horror News! Toodles! 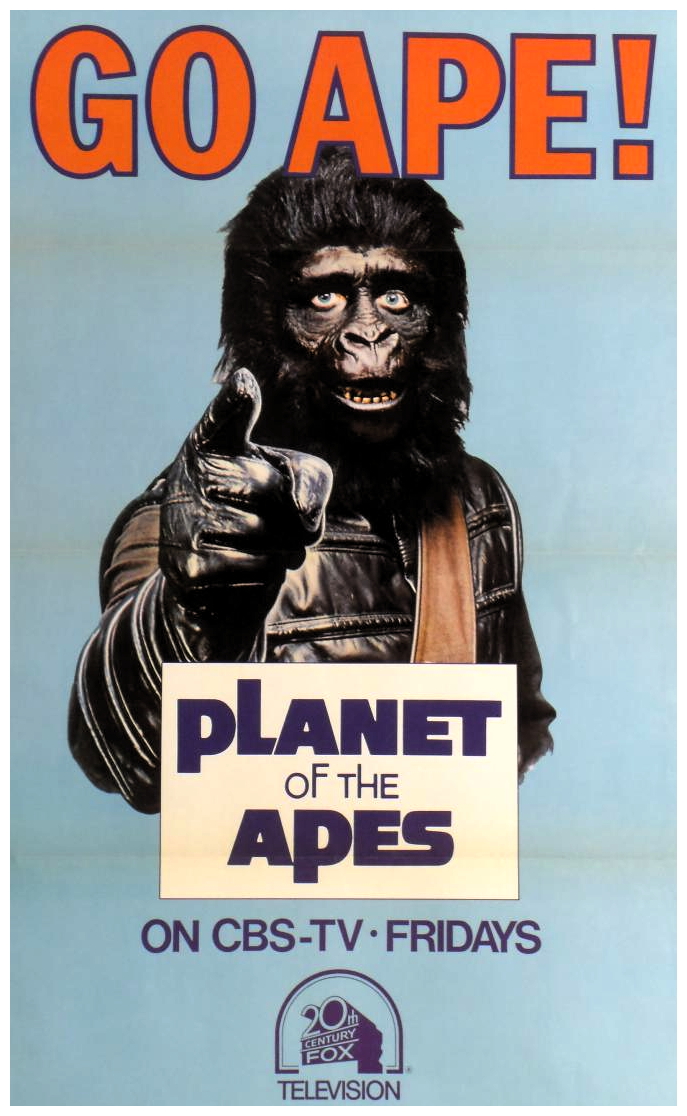