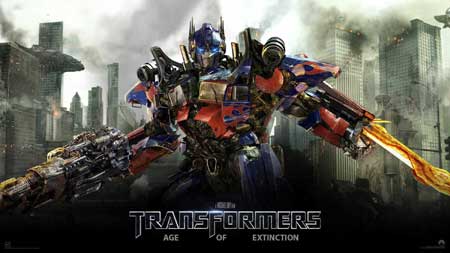 A mechanic and his family join the Autobots as they are targeted by a bounty hunter from another world.

Three year after Michael Bay last soiled screens worldwide with “Transformers: Dark Of The Moon“, he’s back with what he terms as the “First” of a new Transformers trilogy, Transformers: Age Of Extinction“. Never let it be said that the man doesn’t know what side of his toast has butter on it because this latest adventure featuring the noble Optimus Prime & his mechanical mob of Autobots is pretty much the same as each of the previous three entries, just a whole lot louder and longer. Way, way longer. 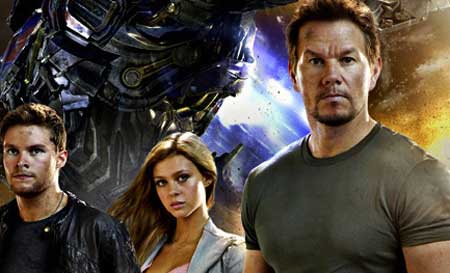 I’d love to be able to tell you exactly what the plot here is but alas, I can’t – at least not in a coherent manner. Ehren Kruger’s script sorta tells the tale of a robotic bounty hunter that’s come to earth in search of Optimus & his cohorts in order to return them to their “Creator” (Whomever that might be). But rather than leave it at that, he tosses in the C.I.A., a Steve Jobs inspired character whose been harvesting the metal (Transformium! Shades of “Unobtainium“!) from downed transformers in order to create new ones that he plans on building an army with, the return of Megatron (Oops…I mean Galvatron. Don’t ask), Dinobots that don’t take to kindly to be awakened from their sleep, giant motherships that have the amazing ability to just appear right behind whomever is in the scene when they make an appearance…without making a sound, Robo wolves, A samurai Autobot (with an Asian accent to boot) and the one and only Mark Wahlberg as a inventor who (along with whomever is running along with him), can dodge cars, planes and cruise ships as they fall from the sky, fall off of a few giant skyscrapers and battle evil Decepticon robots with an alien gun he manages to pick up along the way. And they do all of this with barely a scratch to show for it once it’s all over. Actually, Wahlberg does get a few dents to his chiseled physique, but young Nicola Peltz, who plays his daughter Tessa, literally has a smudge on her right hand and a bit of dust on her extremely white blouse (That stays that way despite her being tossed off of a few buildings as well). Her makeup though? Flawless. 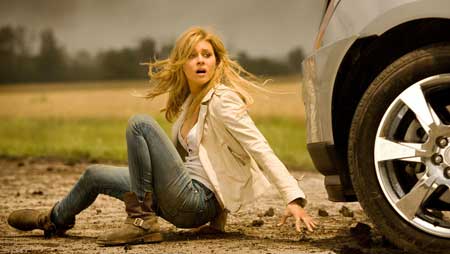 Y’see, this is the problem I have with the entire Transformer series. They’re really not movies – they’re just extended commercials for the massively popular toy line. Although I suppose being able to say “I wrote the latest Transformers script” is a pretty cool thing, it really doesn’t mean too much since all you need do is make sure that the robots have plenty of fight scenes. Toss in some not so witty banter from apparently indestructible human beings and whatever passes for drama in Transformer land & you got yourself a movie! Oh…I forgot about $200 million dollars or so to pay for it all.

Kruger tries to tie this film by setting it 5 years after the battle of Chicago that took place at the end of the last installment. The Autobots are now considered to be villains and have all gone into hiding. Optimus is hiding in a dilapidated, abandoned theater when he’s purchased (For $150!) by Cade Yeager (Wahlberg), who plans to sell his parts off for scrap to help pay for his daughter’s college education. There’s a bit of Randall Peltzer (Gremlins) to Yeager’s character, especially when Bay focuses on some of his more outlandish inventions that never seem to work right. It’s moments like these where the film shines, ever so slightly, before it gets back to the reason for its existence. Big bad robots and the bigger, badder robots they must fight to the death.

But the film is so darned stupid and single minded in its approach that none of the few little shiny moments really matter. Films like this aren’t made to make an audience think or care about the characters in them. Films like this are content to provide a showcase to the militia’s worth of CGI craftspeople who make the impossible seem possible and nothing more. Dialog? Who cares, look at Optimus riding a big dino robot! Characterization? The people don’t want that! They want destruction on a massive scale with robots doing all of the dirty work! Sense? Haven’t you seen any of Michael Bay’s movies? People don’t come to a Michael Bay movie looking for something that makes sense! They come because they enjoy being bludgeoned over the head repeatedly for over 2 1/2 hours.

That’s right folks…actually this film runs for 165 minutes and I’d guess that 150 of them feature something blowing up or a robot melee. That’s all there is to Age Of Extinction in all truthfulness. It’s impossible for me to write about it subjectively because it’s not designed to be reviewed that way. It’s just a really long toy commercial that’s gonna make a billion dollars at the box office, thus making it possible for another Transformer film to come along in a few years that’ll be more of the same. There are those of you that eat this stuff up and if you’re one of these types then you’re gonna be really happy with this movie but I just don’t get it. Mind you, on a visual level the film is marvelous, the special effects here exist in a galaxy all their own. But what does it matter how good a film looks if you fall asleep halfway through it and miss most of its incredible visuals?

My son fell asleep about 45 minutes into the film and woke up an hour later only to realize that there was still an hour left. He was horrified at the prospect so he got up and went to the arcade in the theater lobby to while away the hour playing games that probably featured a robot of some kind fighting another one. I, for one, would like to see this be the last of the Transformer films and to that aim I’ve decided to organize a rally to convince the good people at Paramount to deny Bay’s request for $200 million dollars for the next Transformer film. I’m calling the cause The Rally Against Non-Sensical Silly Forlorn Overlong Robot Movies or TRANSFORM. 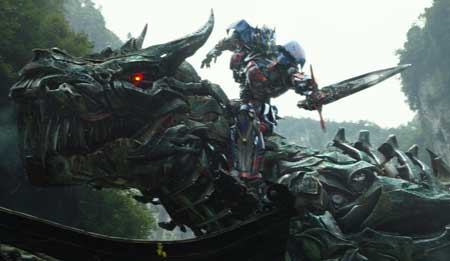 Although I doubt that it’s gonna go anywhere, I implore you to join me in this crusade (Date TBD) to stop Paramount (& indeed Hollywood) from funding any more Michael Bay Tranformer films. Aren’t there better things the studio can do with their money? Feed a hungry child maybe? Help our veterans? There’s gotta be something…

Transformers: Age Of Extinction – 0 out of 5 shrouds.