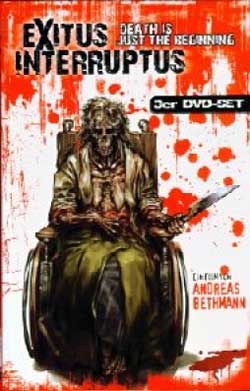 I’m beginning to believe that Andreas Bethmann has really only made two movies, but just keeps remaking each one with different actors and extended scenes. Of course, I’m exaggerating, but he definitely does have his favorite plots, doesn’t he? On the one hand, we’ve got the demon/zombie horror films (Die Insel der Damonen, Damonenbrut), and on the other, we’ve got the women in prison styled, rape revenge-type films (Der Todesengel, Vegetarierinnen zur Fleischeslust gezwungen, etc), either one of which, at any time, could also include hardcore P*rnography (depending on the cut you find). Well, Exitus Interruptus falls into that second category, for sure, but has the added element of horror in there as well, and so represents a little of all of Bethmann’s worlds.

(The usual note must be included, along with an added one; this movie is in German, but we could not locate subtitles, so parts of the plot may have been lost due to lack of translation. This review also covers an edited version of the film, edits that will be discussed as we go.)

Exitus Interruptus – Der Tod ist erst der Anfang (“death is only the beginning”) finds us once again watching women being raped and tortured at the hands of a madman, but this one has a little extra. And no, the “extra” is not tentacle P*rn (not this time). After our main character, Manuela (Renee P**nero, P*rn actress and Bethmann film regular) is trapped in the restroom of a club while a psychopath brutalizes two kissing girls, she is abducted and tied up at his house. When her friend/girlfriend Monique (Anja Gebel, Timo Rose film regular as well as Tatjana from Bethmann’s Damonenbrut) receives a letter that (presumably) tells her to meet Manuela at a house in the forest, one they’ve passed by while walking, she, too, ends up a prisoner. Various bad things happen, the end.

Well, no, not really. We can’t dismiss Exitus Interruptus that easily. While what I described is essentially the plot of the film, there are so many other aspects I’d feel guilty leaving out. The masked psychopath (played by writer/director Andreas Bethmann) also has a couple other people at his house. In a very Texas Chainsaw Massacre/Psycho kind of way, Bethmann added a grandmotherly skeleton as well as a fresh corpse in a wheelchair wearing a mask to the mix. Then he had the psychopath add a dildo to the body of the corpse. Combine this with a variety of children’s dolls tied up in barbed wire and put in dirty positions with each other, and you’ve got a P*rnographic Leatherface, minus the chainsaw.

As I mentioned before, the cut of the film I am reviewing is an edited one, cutting the running time down to about ninety-four minutes (as opposed to the uncut version, which must be around the two-hour mark, as many of Bethmann’s movies are). It is obvious that in the uncut version, there is hardcore P*rn going on, much of which makes up a big part of the nastiness of the film. At one point, a contraption is set up that trains a loaded pistol onto the genital region of a girl, and once a timer goes off, a weight will drop and the trigger will be pulled. What does another girl have to do to stop the trap from being sprung? Well, it involves her mouth, and while the actual oral shots are cut, you see everything else, including what is left after she finishes (this scene could also be taken as very Freudian, if you think of the gun as a phallus, and how they both shoot, but I doubt this was the intention). As you watch her cry afterwards, it’s tough to decide which is worse: this scene, or earlier, when Monique was forced to put the corpse dildo in her mouth. 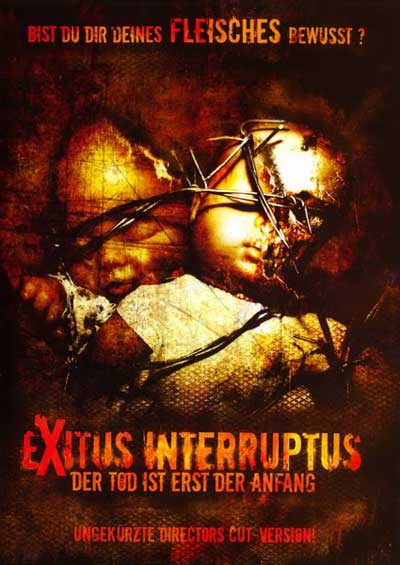 Exitus Interruptus is a movie that makes you feel dirty and grimy after watching it. It could be because a bunch of naked women are being beaten, tortured, and killed. It could be because the director placed himself in the role of the psychopath that also happens to get a blow job. It could just be because it’s a nasty, dirty film, and it achieves its desired results. Bethmann is never shy about what he wants to put in his movies, many of them feeling like P*rn films with extended and somewhat better written plots. When there’s not sex on screen, the camera angles make sure to capture all of his favorite parts of his actresses, often awkwardly and in an obvious manner. And there’s plenty of nasty kills, as well. If you already like Bethmann films, then yeah, of course you’ll like this one. If you don’t like his stuff, chalk this one up as another movie you won’t be watching any time soon. And if you’ve never seen his stuff, well, this might be the perfect example of what he does.