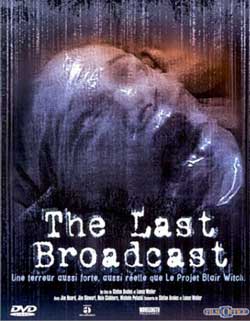 Bristling with equipment, two enthusiastic local access cable TV producers recruit an assistant and venture into a forest in search of the mythical and horrifying Jersey Devil. Days later, only one of the trio emerges. He becomes the prime suspect in the disappearances of the other two. However, a local filmmaker examines extensive footage found at the scene and arrives at a different conclusion.

Now a day the found footage genre is just that, another sub-genre of horror, as much the same as vampires, zombies, and slashers. But there was a time when this was a new and terrifying way to watch a movie, with the perennial question being; is what I just saw real? That’s what lets a director know that they have done a good job, when someone ultimately can’t perceive the difference between a filmed movie, or something terrible that has happened in real life, and someone stumbled across the evidence.

The one movie that most people can point to and say “that’s where it all started from” would of course be The Blair Witch Project, this was also the first movie of this cinematic type that I personally saw, but there were others before it. The earliest that I’m aware of is Cannibal Holocaust, released in 1980 but due to the disturbing nature of this movie, many people might not have seen it. Also with personal video recorders being as big bulky and expensive as they were, the means to make a found footage film was not yet ready. Another film tried this approach in 1992 with Man Bites Dog, but once again due to it being under the radar the film never gained any mainstream footing.

Finally after eighteen years since Holocaust, two more found footage movies make their debut. The first is Alien Abduction: Incident in Lake County, about a son who video tapes real life aliens as he leads them back to his home. The second is The Last Broadcast. 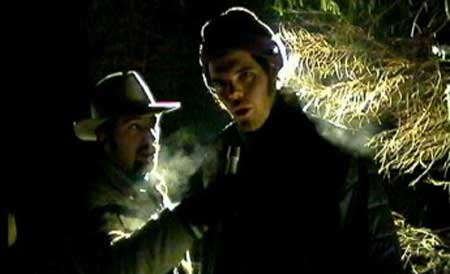 One year after these two movies, The Blair Witch Project is shown in theaters everywhere and the genre slowly starts to take off. But it’s hard to deny that The Last Broadcast didn’t influence Blair Witch in some way or another, the plots are very similar, with the main difference being that Blair Witch shows nothing but the shot footage from the video tapes, where Broadcast is a documentary about the events and flips back and forth between the documentary and the shot footage.

The movie starts with us meeting our documentary filmmaker David Leigh (David Beard) as he quickly explains about the documentary, what it’s about and why he has chosen to make it. 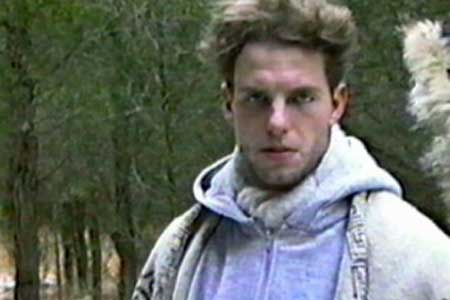 The subject in question is the murder of three people in the Pine Barrens of New Jersey as they were searching for the Jersey Devil, and the one man that walked out of the woods the next morning. Two of the men that were killed were the hosts of a local public access television show Fact or Fiction, Steve (Stefan Avalos) and Locus (Lance Weiler), and as the rating plummeted they needed a gimmick to get them back on top. That gimmick would be a live television and internet broadcast as they searched the woods for the Jersey Devil, but they would need some help. This is when we meet victim number three, soundman Rein (Rein Clabbers), and paranormal psychic and the man accused of the murders, Jim Suerd (Jim Seward). 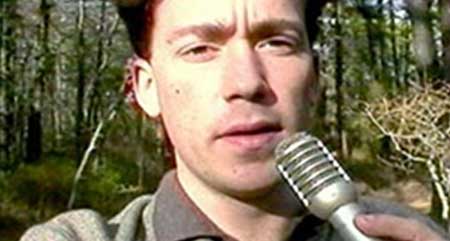 As David interviews people who were both close to the court case and Jim, it becomes more and more apparent that Jim didn’t perpetrate the crimes that he was accused of. But that leaves the nagging questions of if Jim didn’t do it then whom did, and if David can find the real murder and clear Jim’s name. Shortly after David started his investigation, Jim had mysteriously died in prison and David had been sent a missing tape from that night in the woods, but it is destroyed and has to be restored. The tape does show the real killer, but it’s not what you thought it would be.

The Last Broadcast was shot when found footage films were in their infancy, still trying to figure out the right formula to make a truly scary movie. Because this movie switches back and forth between the film that the Fact or Fiction crew’s tapes and the documentary of David it causes two things; it slows down the pace at times when you want the movie to keep moving, and it makes it feel very realistic. The addition of the “bad acting” (purposefully of not) and low quality of film both play a big role in this as well. But the pay off just isn’t there at the end, making you feel cheated and wishing for a different ending. 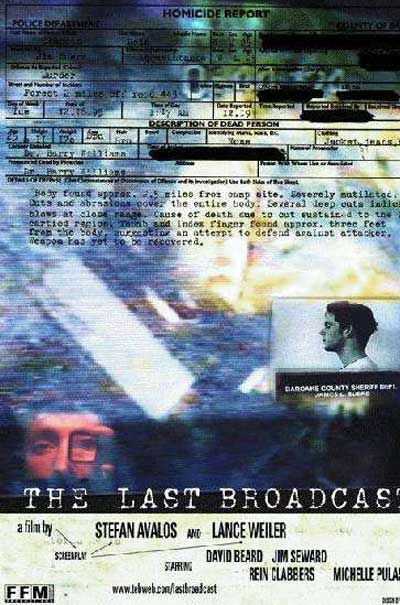 I’m sure that when Lance Weiler and Stefan Avalos wrote and directed this movie, they had no idea how it might play apart in shaping horror history. True, this is not the first film of its kind, but to say it didn’t have any influence on The Blair Witch Project would be absurd, and that’s why it’s a must watch for anyone who wants to see where the core of this sub-genre started.