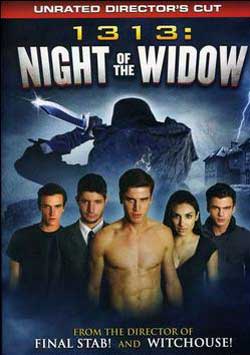 A group of sexy 20-somethings gather to pay their respects to a departed friend, only to become the pawns in a macabre charade of villainous deceit…

ok now that’s out of the way…

For every movie full of boobies I’ve had to sit through in my life, thank you so much David DeCoteau for a little beefcake. Lots of well sculpted man-chest in this one, ladies. Pretty, pretty young mens to look upon.

Our story opens in a very Hitchock-ian sort of way at a rather unorthodox funeral. The friends of our dearly departed are sent off on one last treasure hunt – to find the key to their dead friend’s safety deposit box which is hidden somewhere in his enormous palace of a home and with said key comes the ownership of his entire estate. Somewhere between Clue and The House on Haunted Hill, the story takes off as we learn that their friend was married, a fact none of them knew. And the creepy widow stalks the corridors of the vaulted mansion, killing them off one by one.

But who was the departed’s loving wife? How come no one else had ever met her? Could it have to do with a steamy affair some years ago, and the falling apart of their circle of friends? Or is it something far more…sinister? 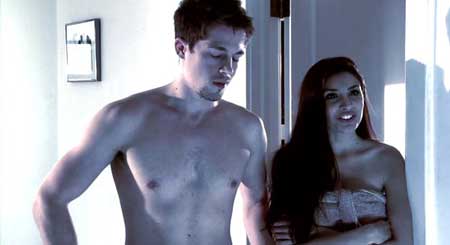 There is a lot to like about this cheesy suspense thriller. Other than the pretty man abs we get to see…a lot…

Writer/director David DeCoteau started his career with the legendary Roger Corman as a production assistant. He eventually did get to direct his first film for another legend, Charles Band. He went on to write and/or direct over 50 films since then, including – Retro Puppet Master, Puppet Master 3, and one of my personal favorites, Sorority Babes in the Slimeball Bowl-O-Rama.

There is also this “1313” series, which I don’t quite understand how all the titles in this series relate to each other. But he wrote and directed all 13 of them. I can think of worse ways to spend a few years.

Let’s talk cast on this film. Some interesting choices, to be certain.

We have Ryan Curry, recently seen in Gingerdead Man vs Evil Bong.

We have Shawn Roe, whom you might know from Pineapple Express.

Andriana Patel, whom you may recognize from College Humour.

and the award for best cameo EVER – Former Playboy model Kristine DeBell as the voice of the widow. Don’t know the name? Just google Alice in Wonderland:an X rated Fantasy. You’re welcome. 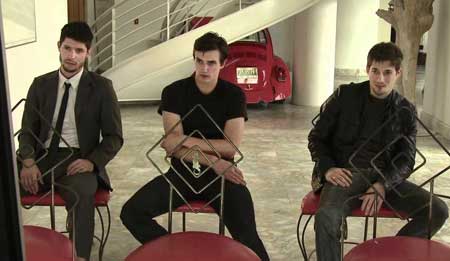 Oh and the score. Yes, I’m talking about the music that plays in the background that no one cares about. This film was scored by Henry Manfredini. You may have heard of him. His music has been used in projects such as Friday the 13th, House 2, The War of the Worlds tv series, Wishmaster…you get the idea. The cheese factor on the music for this film is so high and yet so wonderful, it’s worth sitting through the whole damn thing just for that.

Look, I’m not gonna try and tell you this movie was freakin brilliant. But it was a lot of fun. The story was well written enough that I didn’t sort it out (completely) until the end. The acting isn’t the best I’ve ever seen, but fitting for the style of film.

No effects really…at all. Even with the deaths, this film is totally bloodless. Still, it’s kind of ok, really. It’s not a film about gore. It does get a little slow, and the plot gets a bit muddy at certain points, but it’s still very watchable.The house they filmed in is freakin amazing, BTW. I want to find this place and buy it and live there forever. Even with the creepy broad skulking around.

What this film does have is a black belt in crappy horror cred. Just look at the pedigrees on this cast and crew, folks! I am a huge fan of Full Moon Pictures and Roger Corman, so the elements of those styles that are in the film made it perfectly enjoyable for me. It might not be for everyone, of course. And anyway…this is only my opinion. You can do whatever you want, really.