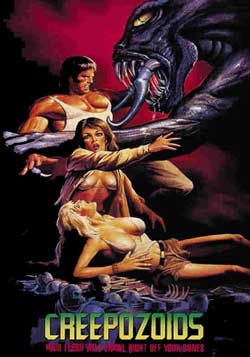 In a post-apocalyptic setting billed as World War III a group of military deserters are on the lamb from the line of duty, the enemy as well as climactic conditions such as fatal acid rain. They encounter a deserted government research facility in the guise of a bomb shelter. Together they vie to survive the elements, regroup and investigate the quadrant’s contents. Oddities soon arise as they realize they’re far from alone.

“Move over aliens, here come the Creepozoids. Even if you kill them, they’re still deadly.

Creepozoids was one of those ideas that probably looked positively stellar on paper. Sadly this B rated flick falls way out of the stratosphere in its execution. It’s no surprise the film was shot in a mere twelve days with a modest budget of around $75 000. It carries not the intellectual, gritty integrity that many low budget films seem to possess and the viewer cannot help but feel embarrassed time and again from investing time in watch such a tawdry debacle. The cinematography is grainy and most certainly inferior to the high definition quality we’re accustomed to today. Many of the camera cuts in the heat of action are absurd and lack relative technique as do the angles that could’ve held a lot more water in terms of believability. The consensus among the audience is if we’re actually watching a parody or a series stab at a good old fashioned Sci-Fi chiller. DeCoteau’s final product is so bad we can’t help but continue to watch the train wreck unfold before our eyes. A morbid sense of hope arises; thinking that at very least this little ditty could develop into a cult classic that becomes one of our many guilty pleasures. Incidentally the picture was a box office flop recovering only $13 000 in ticket sales. 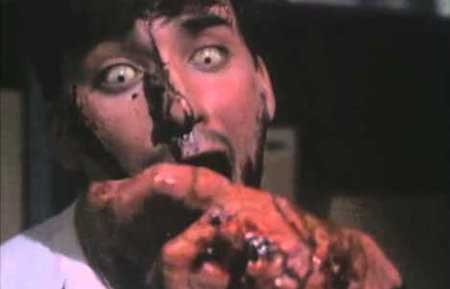 The dialogue and much of the acting is the personification of cheese. Most noteworthy is Ashlyn Gere’s performance in the role of Kate. She’s immensely easy on the eyes and if you think she looks familiar you’ve likely seen her before. Ashlyn is best known for her storied career as a xxx performer in such classics as Chameleons, Talk Dirty To Me 9 and Michael Ninn’s Decadence. Many viewers may be accustomed to Gere raising their pulse in another genre altogether. Oddly enough she sheds not a solitary article of clothing which is certainly a change of pace and cannot help but redeem her acting ability.

Fear not gratuitous nudity fans, Bianca (Linnea Quiqley) delivers the goods in an extremely steaming shower soiree with co-star Butch (Ken Abraham). This almost is worth the price of admission alone. The plot momentarily takes on the tone of a soft core p*rno in a scene that is worth a look or three. Quiqley certainly has the physique to captivate the attention of any red blooded American male and likely the scattered female as well.

Then just as quickly as the excitement started we’re thrown back to the absurdity of such fallacies as the mutant creature hoisting one of its prey while a protective harness can quite visibly be seen. 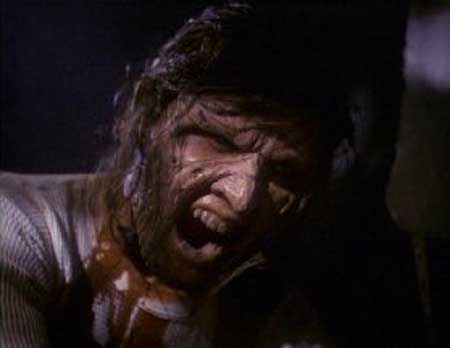 The costume and set design for most part were on the mark. Most of the characters are donned in relatively inexpensive cargo fatigues and peek a-boo white jerseys. It is rather laughable to watch the characters perform varying ‘futuristic tasks’ on a dot matrix computer. The setting is allegedly trying to convey a time frame of around 1998. The teased hair reminiscent of eighties nostalgia on Quigley and plastered on make-up tend to allude to otherwise.

The special effects really aren’t that bad. The creature or mutant alien looks grotesquely sinister. It’s a reminder of the Alien protagonist the marketing team keeps boasting its more grandiose in presentation. If you took a dash of the Predator character and morphed it into the original Alien then you’d have a bona fide Creepozoid. Sadly the camera men shy away from any form of lingering shots artistic or otherwise. In all likelihood the mandate was not to allow too much scrutiny. 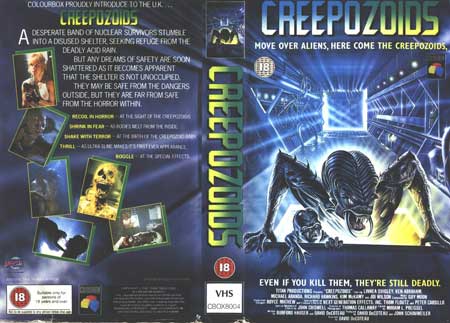 The vermin like creatures are beyond silly in both presence and delivery. The end result is if someone offered a taxidermy 101 course and someone dropped out in mid project for unknown reasons. As the actors roll around, flailing in angst riddled drama it creates the exact opposite effect that leaves the viewer laughing in stitches. 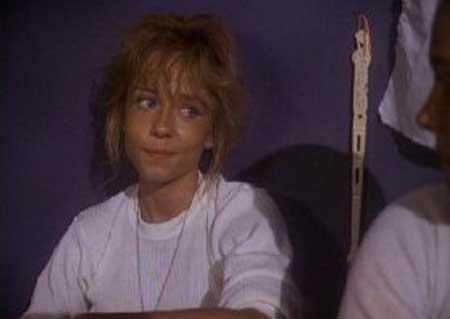 One redeeming quality of special effects is the incubus character introduced in the final act approximating the last twenty minutes or so. The tag line should’ve been revised to move over Chucky or Damien because this little buggar is creepy with a capital C. It’s truly a shame this character wasn’t utilized more. 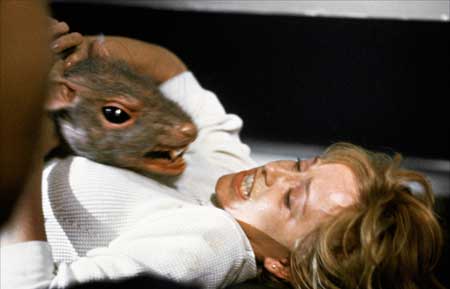 Without doubt the most irritating aspect of Creepozoids was the musical score performed by Guy Moon. I completely get the enthusiasm of synthesizers in the eighties. It was a new novelty, new sounds and new emotions that carried along with those sounds. Perhaps some LSD would best enhance this experience of butchered psychedelia. It makes the scenes that should’ve been building considerable tension and suspense come across as goofy and something the Wayans brothers would have a hay day with. Perhaps Moon was over enthusiastic in sharing a new Yamaha keyboard for Christmas, who really knows? 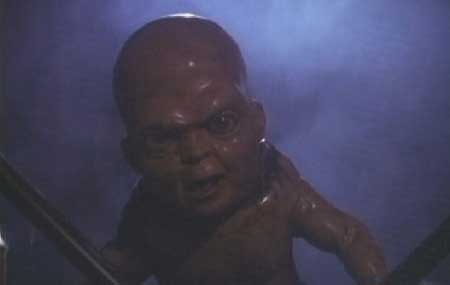 The sound effects aren’t bad and if there is at least one disturbing note of Creepozoids is the unearthly utterances from the writhing, infected bodies. It embodies sheer suffering and agony. Then again maybe the actors were privy to what they’d gotten themselves into.

Perhaps there is a cult following somewhere but I just wasn’t at all creeped out by Creepozoids.

One out of five tombstones.