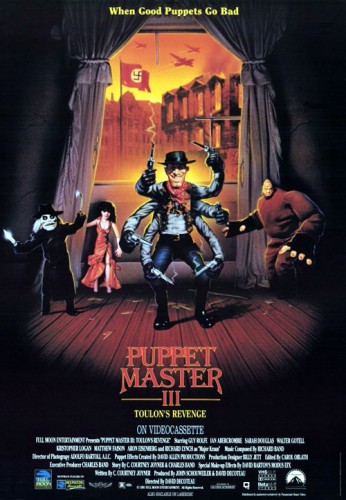 After hearing that Andre Toulon’s puppets have no strings but rather seem to have a life of their own, Dr. Hess, a Gestapo henchman during World War II, sends the Gestapo to the theater to kidnap them. During the melee, Toulon’s wife Elsa is killed and Toulon is whisked away by the Nazis. However, on the way to headquarters the puppets attack the Gestapo and escape with Toulon. Now Toulon begins to plan his revenge. He creates a new puppet, Six Shooter, models Blade after a pasty-faced Nazi and uses Elsa’s essence to create Leech Woman, Now Toulon’s army is ready to get even and take revenge.

It’s rare that a sequel tops the original, but 1991’s Puppet Master III: Toulon’s Revenge did just that. It’s even more surprising considering it was quickly produced and released a mere 8 months after the second installment. Add to that the fact that it’s actually a prequel, and you have yourself a rare movie that beats the odds.

The film takes place in 1941 Berlin (an immediate error in the series’ continuity, as the original clearly states that Toulon killed himself in 1939). It’s the middle of World War II, and Germany is under the Nazi regime of Adolph Hitler. While most of the country lives in fear of the powerful dictator, local puppeteer Andre Toulon (Guy Rolfe) openly satirizes The Führer in his puppet show.

When Nazi Lt. Eric Stein (Kristopher Logan) witnesses this treasonous act, he reports Toulon to the higher ups. But Stein then finds something even more interesting: Toulon “feeds” a fluorescent green liquid to the puppets, who move freely with no strings. It’s not long before the Gestapo raids the theater. Taking it even further, Major Kraus (Richard Lynch) kills Toulon’s wife, Elsa (Sarah Douglas), before capturing Toulon and the puppets. But, of course, they fight back.

While the puppets were the bad guys in the first two entries, they are the protagonists in Puppet Master III. What better enemy than Hitler to make the puppets more likeable? (Unfortunately, Hitler himself is not a character in the movie.) As such, it’s not much of a horror movie. Although thematically adult, the classic good-vs.-evil story feels like a children’s movie at times. Thankfully, there’s enough blood and death to offset that.

The film couldn’t logically feature Torch, the standout puppet from Puppet Master II, but it does introduce the six-armed cowboy Six Shooter. A similar puppet was originally conceived for the first film but never made it. It’s good that the idea was revisited, because he became an instant fan favorite and has appeared in most of the Puppet Master movies since. In addition to Six Shooter, the prequel storyline provides additional details about the origin of our pals Blade, Pinhead, Leech Woman, Jester and Tunneler. Leach Woman has a particularly interesting backstory, even if it conflicts with a plot point from Puppet Master II.

Puppet Master III is superior to its predecessors in every way. B-movie maven David DeCoteau (Sorority Babes in the Slimeball Bowl-O-Rama) puts his low budget experience to good use in the picture’s direction. The script, penned by C. Courtney Joyner (Trancers III), is a familiar but creative tale. The production value is improved (thanks, in part, to exteriors shot on the Universal backlot), along with better puppet animation.

A remastered, high definition version of Puppet Master III is available now on Blu-ray for the first time from Full Moon Features. As I said in my recent review of the simultaneously released Puppet Master II, it’s as sharp as the picture has ever looked, even though it’s not the most mind blowing Blu-ray. The disc also features an introduction by creator Charles Band, a commentary from DeCoteau and Joyner, the classic Video Zone behind-the-scenes segment and some promo videos.

The surprisingly ambitious Puppet Master III: Toulon’s Revenge holds up well. I hope Full Moon continues to release high definition remasters of the rest of the Puppet Master series, but none of them top the third installment. For my money, it remains the best in the franchise by a fairly wide margin.