Home | NBC Gears Us Up For This Weeks Episode Of HANNIBAL

Here at HNN we are all nuts over HANNIBAL. If you haven’t checked out our fan podcast you need to do so and you need to do it now. Seriously you are missing one of the best shows on TV and in this day of streaming episodes it is never to late to get caught up.

If you’re already up to speed then the following news should be music to your ears. We’ve got a nice little tease of what we can all look forward to come Friday night. Episode Seven is titled YAKIMONO and will go just like this:

When Jack Crawford’s (Laurence Fishburne) star pupil, Miriam Lass (Anna Chlumsky), is found alive, she becomes the FBI’s best hope of identifying the Chesapeake Ripper, but her foggy memory complicates the search. Evidence found at the site of Miriam’s rescue exonerates Will Graham (Hugh Dancy) of any involvement in the Ripper and Copycat cases, and he is released from the asylum. Will warns Dr. Chilton (Raúl Esparza) that he could be in danger due to his intimate knowledge of the Ripper case, but when Chilton tries to confide in Jack that he shares Will’s fears about Hannibal (Mads Mikkelsen), he is rebuffed—no evidence has been found against Hannibal, despite the FBI’s efforts. Meanwhile, Jack wastes no time in reinstating Will on the BAU team as they hunt for the Ripper. After introducing Will and Miriam to compare notes, Jack’s suspicions of Hannibal’s involvement continue to build. Only Miriam’s memory holds the key to unlocking the Ripper’s true identity, but can it be trusted? Also starring Caroline Dhavernas, Aaron Abrams, Scott Thompson, Raúl Esparza, and Eddie Izzard.

Check out this video tease:

NBC released a bunch of images for this episode as well but in all honesty, they are pretty much the same but here’s one for you anyway. Check out the show on Friday you won’t be sorry. 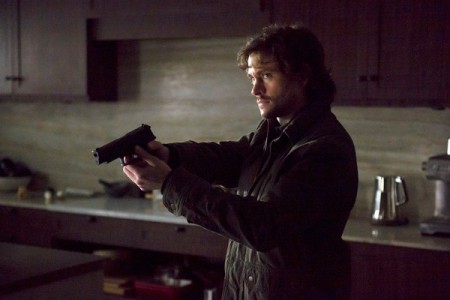