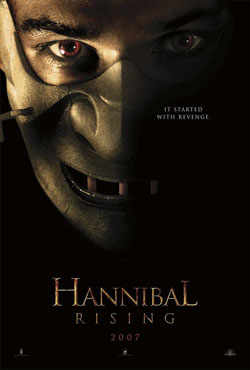 Director Peter Webber takes on the myth of the menacing Hannibal Lecter (Gaspard Ulliel) in this terrifying prequel that attempts to trace the murderous roots of the cannibalistic killer. The film follows Lecter from his hard-scrabble Lithuanian childhood, where he witnesses the repulsive lengths to which hungry soldiers will go to satiate themselves, through his sojourn in France, where as a med student he hones his appetite for the kill.

Hell-o, flesh fiends of the macabre. This review is for the prequel to the Hannibal Lecter Saga. This time around, not only did Thomas Harris write the book, but he helmed the screenplay as well. This film is the dark upbringing of Hannibal Lecter that made him what he is today. A horror icon of the new age.

This may seem weird, but of all of the films, this is my least favorite. It had nothing at all to do with the acting, direction or anything of the sort. I think it was the time piece used in the film. I am a fan of Full Metal Jacket, Platoon, Casualties of War, etc. This installment of the saga takes the viewer through many different cultures and time pieces. We see what made Hannibal the way he is (or was) in The Silence of the Lambs.

This film focuses less on the police force and mental exploration of the characters as the rest of the films in the series. I think that’s what got to me the most. Of course, this is only my opinion. I enjoyed the “digging into each other’s minds” concept. Then again, every story has a beginning, right? This is it.

The acting was very well done. Anthony Hopkins had some big shoes to fill and I think Gaspard Ulliel (the Hannibal of this feature) did just fine in doing so. He watched The Silence of the Lambs repeatedly and it shows. He learned Anthony’s movements, head tilts and tone of voice and tackled them all exceptionally well I might add. He also became obsessed with viewing actual cadavers during the making of the film. A new taste in method acting.

The story skips ahead several years and has many combat sequences of several different styles throughout. A boar (from Hannibal) is seen at the very beginning to pay homage to the long trail that the viewer is guided down in reverse. This is accompanied by a pretty cool title card. In some senses, this film is a bit more brutal and disturbing than the rest. This one shows Hannibal’s childhood and other family members from this era. His sister is mainly the focal point of this installment.

Some of the cinematography is picture perfect. If you could freeze and frame them, they would make a nice picture for living or dining room viewing enjoyment and decoration. Many fight sequences of many sorts were used here as well. Also, pretty different from the others. A sound effect used for wiping a sword blade kind of mentally took me away from the realism. It sounded almost like a life saber.

Another thing was the love. It played a big part of the picture. Love for family and others. It was an underlining theme throughout. I can’t say much more without giving away too much. Love for family also started a bond for love between Hannibal and another character. My stomach was almost turning at this point. Some like that sort of thing. I personally do not. There is a little bit of police drama, yet still less than before. One thing I liked a lot was how sadistic and torturous Hannibal was as a young lad. He had no remorse and loved the sight of blood, pain and suffering. Remember, there is a motive here. The nightmare sequences throughout gave the film a nice touch of morbidity as well. The time progresses from 1944 to 1952 through the duration and running time. One funny thing was how the detective soon became Dr. Loomis (of the Halloween fame) for a second. He spoke of how the child Hannibal died years ago and the embodiment present within was a monster. The gore score is quite high. Around a ten out of thirteen. There are some pretty good kill scenes as well.

The DVD Special Features include deleted scenes with optimal commentary, a documentary called Hannibal Lecter: The Origin of Evil, a commentary by the director and producer, another documentary called Designing Horror and Elegance with the Production Designer and theatrical and teaser trailers. All in all, it’s a decent film, but in my opinion, fails in comparison with the rest of the series. Still, the origin must be told, and you have to respect that. I guess it’s like getting use to the first three Star Wars films after being a fan of A New Hope, Empire… and …Jedi. It takes a little to get use to. Nevertheless, the heart is there and the flesh is still removed in the end. Just as a Hannibal Lecter fan would hope for. In this case, I give this film, Hannibal Rising, TWO HORNS UP.