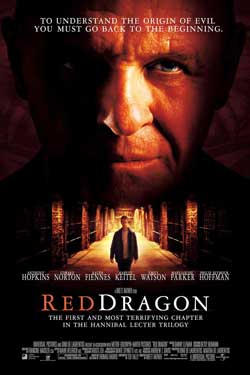 A retired FBI agent with psychological gifts is assigned to help track down “The Tooth Fairy”, a mysterious serial killer; aiding him is imprisoned criminal genius Hannibal “The Cannibal” Lecter.

It feels fitting to finally take on the review of Red Dragon with the TV show Hannibal now in mid season 2. “Red Dragon” is one of the Hannibal Lechter films I’ve always held in higher regard. In the sense of the franchise, it is an earlier inclusion that came “after” Hannibal the movie though predating the 2 releases that put Hannibal on the map. This 2002 crime thriller would reprise the acting talents of Anthony Hopkins while introducing the character of Will Graham (Edward Norton)

Franchise fans might feel somewhat confused in the order of the movie roll outs, however the Hannibal series has always been a series that jumps around through the life of Hannibal. If you are to include the TV series then you might also note that the TV series is based on the universe “leading up” to “Red Dragon”.

Directed by Brett Ratner, “Red Dragon” could stand on its own simply as a great crime drama. Seeing that it is a Hannibal film, makes it even more appealing. Now a fan of the TV series, I was curious after not seeing this film for some time how the pieces might start to fit together. It’s hard not to compare this “to” the series, but it still remains true that “Red Dragon was created quite some time ago. The movie gains its plot from the Thomas Harris novel of the same name.

First mention should go out to the stellar cast that has been assembled for this release. Actors include Ralph Fiennes, Philip Seymour Hoffman, Mary-Louise Parker, Emily Watson, and Harvey Keitel in addition to our before named actors Norton and Hopkins. If nothing else was said, it should receive merit for that fact alone. 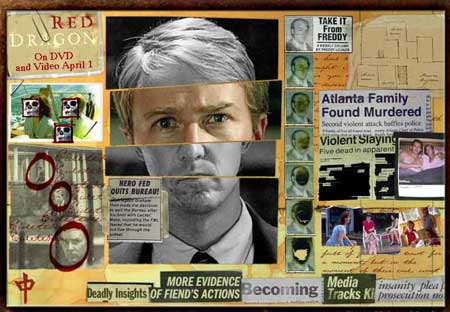 Hannibal is caught in the first scene. This is not a reveal, but how this film’s story was meant to start. The character of Will Graham is introduced who at the moment has befriended Hannibal and has looked to him as a consultant into recent cases. Will, a clever FBI profiler, connects the pieces in this single moment of clarity confirming a notion as he looks at 1 of Lechter’s reference books.

Hannibal tries to murder Will, but is shot and captured. Now incarcerated, Hannibal will play a part in Will’s future when he is needed again. Will, now retired, is called back into action on a recent case that has some unusual but similar connecting trademarks. The FBI have profilers, but none with the insight that Will posesses. Reluctantly, Will agrees to take a look and help them on this one.

Now surprisingly Hannibal is not the main antagonist in this film, much like the direction they took in the film “Silence of the Lambs”. His role is more as an advisor who agrees to aid Will based on special privileges allowed for Hannibal. Ralph Fiennes takes the lead as Francis Dolarhyde, our main serial killer this round ( which by the way is not a spoiler).

Francis is revealed right from the get-go, at least to the audience, while Will tries to solve the case. Francis suffers from a God-complex that is inspired by the artwork of “Blake”. He feels he is becoming the “Red Dragon”, a transformation he refers to as the “becoming”. Francis also wears a full back covered tattoo of this artwork to show his dedication. 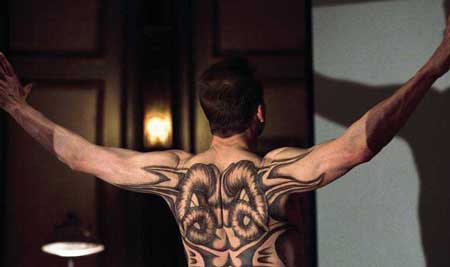 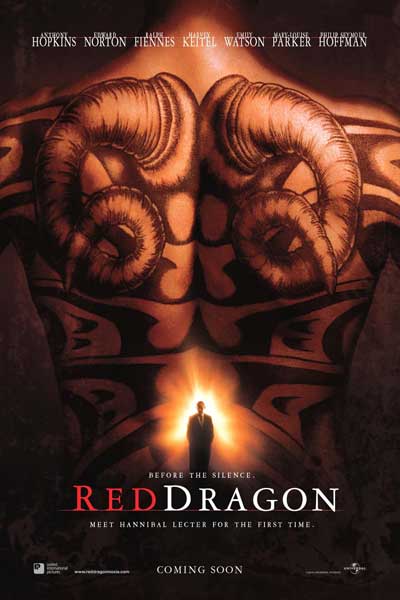 His victims are studied and then killed replacing their eyes with mirrors. This trademark has monikered him with the media-labled-name “The Tooth Fairy”. Though Francis, a rather quiet individual, bears the scar of a palette operation on his way to what he feels is an evolution.

Characters are introduced in this film. One of which is the bothersome reporter “Freddy Lounds” of whom is played by a woman in the “Hannibal” TV series. Freddy is played by Philip Seymour Hoffman in “Red Dragon” as the lead reporter for the tabloid the “Tattler”. Harvey Keitel plays FBI investigator Jack Crawford who is also key to this story. 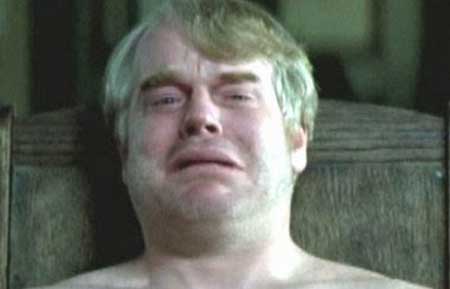 The film is powerful backed by Ralph Fiennes even more powerful performance as a believable serial killer who just isn’t quite there. We would come to recognize this performance being almost mirrored when Fiennes would play a similar style in the movie “Spider”. “Red Dragon” is a great film and a great part to the franchise series. You might even say it was the last “greatest” film that reprised some of its cast. While I did enjoy Edward Norton’s performance, it would be reinvented years later in the TV series in a much better and troubled version that easily takes the lead as the definitive  “Will Graham”. Norton lacked a “suffered” approach that should have been embraced with more darkness than the version he delivers. None-the-less, I’m a Norton fan. 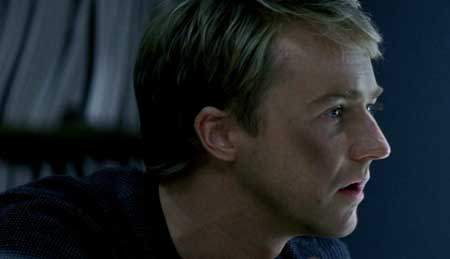 Overall a keeper that cements the Hannibal legacy in 1 of the best 3 films of the franchise (with  Anthony Hopkins…that is). It feels rightly dark which is exactly what fans want out of these movies. This is the last film to date that features actor Anthony Hopkins in the role of Dr. Hannibal Lechter.