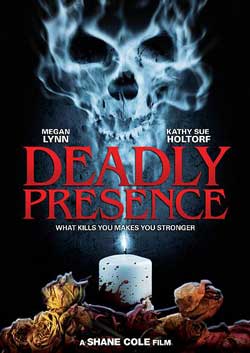 Three friends looking for a night of fun decide to stay in a supposedly haunted house. Several days later Candace finds herself in the midst of strange happenings. When she calls on her friend for help, it’s up to her to seek the answers.

Before the review begins, I want to make you a promise. You do not deserve the pain and agony of reading the terrible puns that will repeatedly come to mind as I write this. That is why I am making a vow right now before I get into the bulk of my review. I vow to refrain from making any puns using the words “deadly” or “presence” as I write about the film Deadly Presence. In fact, I promise to not even use those two words unless I am stating the title of the film. You can rest assured that I will keep my promise. I will not hurt you; however, I will hurt myself by watching this movie. 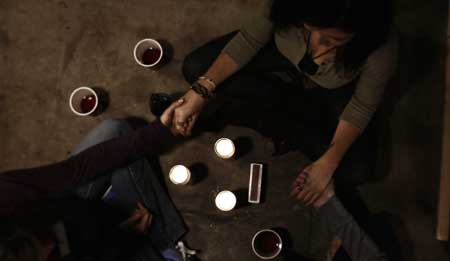 One thing that a visual medium such as film should stand fast to is the idea of “Show, don’t tell.” It is an easy enough idea to comprehend. If something visually striking is going to happen, show it on screen rather than putting it in dialogue. In horror movies the idea is even more important. If there is going to be murder and struggle, show it. The audience wants to see or hear the events as they unfold. The viewers do not want to see the lead up and the aftermath without the in between. They want to hear and see the spooky things. They want to live vicariously through the gruesome ordeals. The pleasure in horror is being horrified. Not showing the most horrifying events can turn a decent tale of horror into a painstakingly messy product.

A movie that could learn a lesson about showing and not telling is 2012’s Deadly Presence. The movie is all bark and very little bite. It is filled to the brim with sequences of dialogue about things that have happened. When that isn’t the case, and director Shane Cole decides to actually show the events unfolding, he avoids showing the horrific events and instead shows the build-up and the fallout. An interesting idea ends up floundering because of the way the story is presented. Let me elaborate on that. 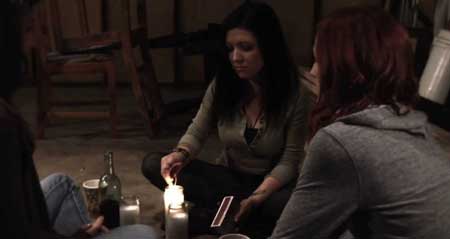 Deadly Presence began with three twenty-something women holding a faux séance in the former home of a deceased serial killer nicknamed The Night Giver. When the obvious manifestation of the spirit occurs, the room conveniently went to pitch black. This meant that I could not see anything and the director could avoid spending money on any effects required to actually show what was happening. The picture came back as two of the women were trying to open the door and escape. The third was sitting on the floor in shock. I did not know what she was in shock from, but I assumed that the spirit did something to her.

The remainder of Deadly Presence was filled with exposition from one character to another following the events of that fateful night. Candace (Kathy Sue Holtorf) believed that whatever attacked her during the séance had taken control of her body. She told Andie (Megan Lynn) about all of the strange things that have happened to her since. The problem with it is that the majority of it was pure talk. What little amount of the events were actually shown took the terror out of the story by repeating the tactics of the opening scene. The events leading up to the horror were shown, then the movie strayed away from the horrific occurrence and showed the results. Shane Cole was basically doing the visual version of telling and not showing in storytelling. It left me extremely dissatisfied with the movie. 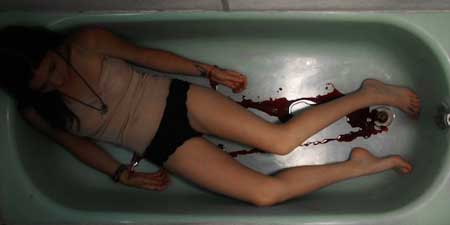 Now I’m going to backpedal a little bit because I do not want the good aspects of Deadly Presence to go unnoticed. I might have a large issue with the presentation of the story but that does not mean that everything within the movie is terrible. The story itself was still good. It had the potential to be a gripping tale of poltergeist danger. The two lead actresses tried their hardest to portray their characters and the struggles of the characters throughout the film. I found them enjoyable enough to watch. And the few times that something horrific was actually shown, I was impressed by the work that was done.

It is easy to understand why Shane Cole told more of the story than he showed. With a budget of around $1,600, you cannot be spending a lot of money on effects. The money has to go to the basic needs of the production. The actors need to get paid. There needs to be some sort of food and water available. Equipment needs to be bought or rented in order to shoot the movie. All of the expenses would easily stretch such a low budget out to its limits. Too bad it came at the expense of the storytelling. 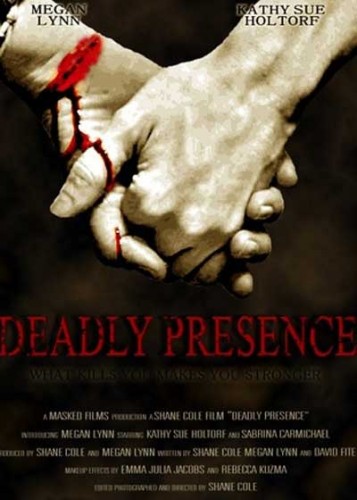 There are worse movies than Deadly Presence. There are many more, better movies. This movie has fundamental problems that keep me from giving it my seal of approval, and I give that seal of approval to a lot of movies. If you come across this movie in your horror watching lives, I would suggest that you pass up the opportunity to see it. Although, the choice is up to you. It’s your life. 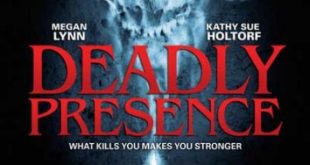 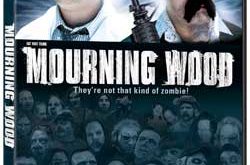 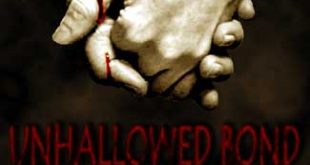