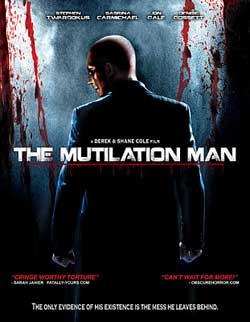 An unknown man makes his way into a quiet neighborhood bringing nothing but torture and pain along side him. The police are on the hunt for someone with no identity, the only evidence of his existence is the mess he leaves behind. When he enters the home of Roy and Jessica, they have no idea what’s in store for them. As the story unravels you find that there may be more motive behind the mans actions than either of them could ever imagine.

The world of indie horror is a varied landscape. For every Frozen or House of the Devil, films that reinvigorate or play with trappings of the genre, you’ll find substandard offerings that rely on shock value and clichés. 2010’s The Mutilation Man, from sibling duo Derek and Shane Cole, does suffer from a lack of creativity, but is made with enough style and verve to hide the majority of its shortcomings.

Roy (Stephen Twardokus) and his wife Jessica (Sabrina Carmichael) are quietly celebrating their six-year anniversary. All goes well until a masked man kidnaps the pair and imprisons them in their own garage.  Meanwhile, Detectives Row (Jon Gale) and Mitchell (Jamie Sebert) are investigating a brutal murder that bears similarities to other crimes they’ve worked in the past. They learn all the victims are linked and find out who the next targets are: Roy and Jessica. 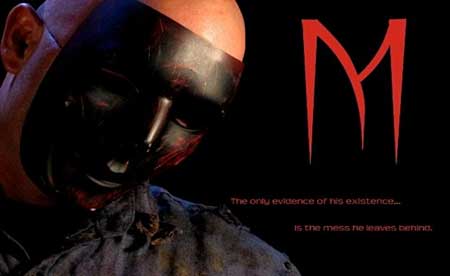 I have to wonder if the Cole brothers were huge fans of Friday the 13th. Their killer resembles Jason Voorhees in many ways: his bloodlust is driven by revenge, he’s not the most vocal person in existence, and he knows how to wield a machete. He also reminded me of Michael Myers as the two are clad in faded black jumpsuits, but Friday the 13th is clearly the bigger influence here. It would be easy to laugh the villain off as a ripoff, but he’s quite intimidating.  I felt discomfort just watching the killer lounge around before making his next move.

With a title like The Mutilation Man, you would expect gallons of blood to drown the screen. Make no mistake: you see some bloodshed and the severing of one or two body parts. However, the directors show some taste when filming the torture and murder sequences. Shots of the killer obscuring his tormentor and actors’ anguished faces unnerve the viewer as strongly as explicit portrayals of murder would. Other scenes, notably the ones with the detectives, suffer from excessive close-ups and poor blocking. Overall I was pleased, and even surprised, by the Coles’ direction.

Considering the material, it’s no surprise the performances aren’t nuanced or complex. At least leads do their jobs with ease and competence. Really, that’s all you can ask for in a slasher/torture p*rn flick. Some of the minor actors are leaden in their line readings and expressions, although it’s not hard to forget about them when viewing the film. As mentioned above, the story is a hodgepodge of ideas found in previous horror films, but I still wanted to know the killer’s purpose and reason for his crimes.

Honestly, The Mutilation Man had many things going against it. A villain that heavily resembles one of the most famous horror characters? A story that’s been done before? It could have been a chore to sit through. Thanks to taut direction and well-crafted suspense, The Mutilation Man rises above its limitations and becomes an entertaining and intense thriller. The ending leaves room for a second and third installment. Should one be made, I would very much like to see it.