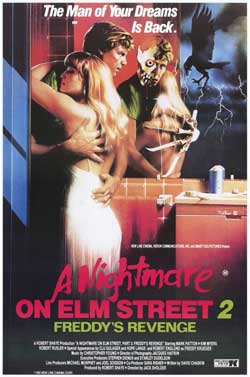 A teenage boy is haunted in his dreams by Freddy Krueger who is out to possess him to continue his murdering in the real world.

In 1985, hot off the tail off the successful release of “A Nightmare on Elm Street” came the rather odd follow up “A Nightmare on Elm Street 2: Freddy’s Revenge“. That notion wasn’t too big of surprise with horror maven Wes Craven “not” helming the rig this round. It’s original release was already established as a scary surreal hit film that was on its way to becoming a bankable franchise. However, somewhere along the way a few writers and film makers “jumped the shark” with this odd “filler” of a film as a sequel. I have long wanted to review this one simply because its odd and has gained the hilarious moniker of being one of the “gayest” horror films of all time. 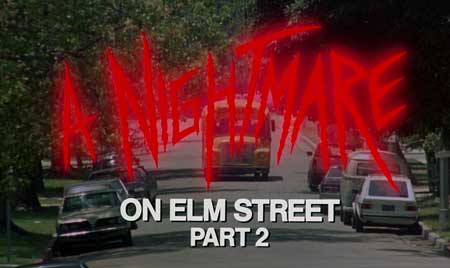 Now to clarify, that “term” is not meant to be critical, but rather a fact coming off its many gay suggestive scenes that at the time flew under the radar (even to horror fans). Upon retrospect, it’s also quite hilarious when reviewed at this angle.  Still in all fairness, I remember liking this one “somewhat” for its fleeting horror aspects. If viewers were to revisit this one on “that” basis, you would begin to recognize the oddly gayish moments that feel a bit “injected”. I won’t dwell on this fact, however to name a few…..the baseball de-pants-ing, the jerk off dance, the curiously titled board game “Probe”, the S& M coach and even our main characters freak out moment that leaves his willing girlfriend on the floor while he heads off to ask Grady if he can sleep in “his room”. Viewers will quickly make this and other associations that suggest “something” was indeed suggestive for coincidence. 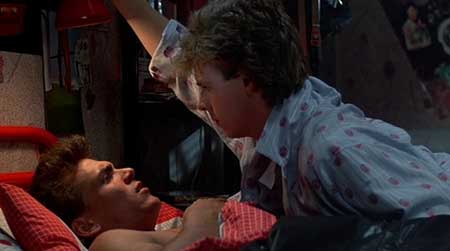 Like many of us, I was smitten by the Krueger character and franchise. To date, I still love them all with the only exception being the failed remake.

In premise, the film centers itself on lead actor Mark Patton who plays the role of Jesse Walsh. Jesse begins to experience odd transformations occurring within his own body as the evil Fred Krueger is awakened inside of him. Jesse and his family now reside at the same house that Nancy from the original film used to live in. The house which was acquired at a “very affordable price” still harbors the residual evil of Krueger (where his gloves were placed in the furnace).

Jesse, who is just trying to get thru school, make new friends and a work thru a sudden love interest in Lisa Webber (Kim Myers) is also at odds with this emergence of Krueger’s essence blossoming within. This literally sets the stage for Jesse to transform “into Freddy” at times leaving him in a confused state of reality. This inner transformation “could” be looked at as a metaphor for Jesse’s coming out the closet, however this idea is only in theory. I’m sure viewers could form a whole analogy around this idea if they were so inclined. 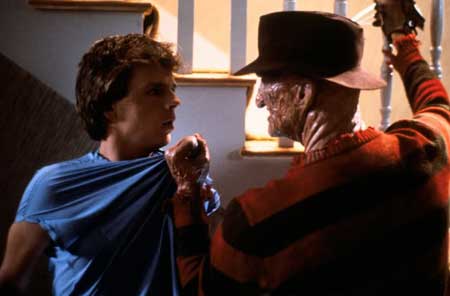 For the sake of review, I’ll stick with the film simply as a failed horror movie.

“A Nightmare on Elm Street 2: Freddy’s Revenge” in all fairness was still trying to sort itself out and where they should take this character. The rules of Freddy’s universe are very apparent “now”, but in this first sequel that notion was somewhat evolving. 1985 was a great 80’s year with several ideas and iconic moments emerging into what we’d later define as definitive 80’s. Where “Freddy’s Revenge” failed was in its missed opportunities to stick with the formula Wes Craven started. Freddy is seen emerging in “our world” several times and affecting much of reality which is “supposed” to restrain itself to a dream world. That dream world never really happens on the most part here. One could argue that the last scene of the film suggested “all” to be in a dream world, however there is something flawed in simply suggesting nothing really happened and was just a elaborate scary nightmare. This separation would return in Nightmare on Elm Street 3 thus keeping the rest of the franchise grounded in a base of “laws”. 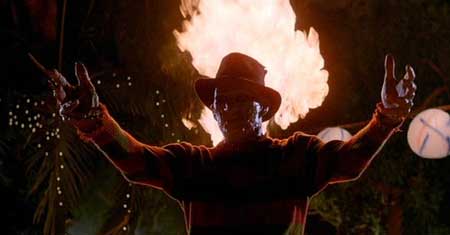 We also see a wolverine-version of Freddy in this version where he no longer needs the gloves and projects knives directly from his hands. I’m calling this one a logic error on the writers part who should keep Freddy bound to certain standards. (no really…..they should!)

Robert Englund’s makeup this round was less defined and more macabre, sort of like a demented boiled pustule. The Freddy look would evolve soon to be less gooey and more “burnt man” looking.

Actor Robert Rusler, who was just coming off of his “Weird Science” gig, would play school mate Ron Grady with Mark Patton taking the lead as Jesse Walsh. Marshall Bell would gain recognition as the odd S&M closeted leather wearing Coach Schneider who was rumored in the film to frequent gay nights clubs as a pedophile (speaking, character that is…) 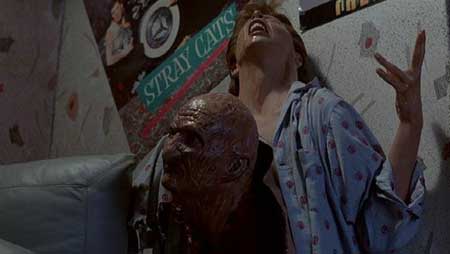 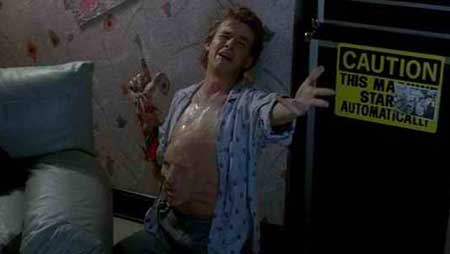 “A Nightmare on Elm Street 2: Freddy’s Revenge” offered some interesting moments, though the fx work could have been better. The fx props often looked fake and cheap such as the Freddy rat, Freddy dogs and the de-skinning of Jesse. I believe the film was made in a rush with limited funds in the yet to be realized pre cult icon stage of Krueger and the gang. Nightmare 3 would be the film that cemented the iconic emergence of this new horror villain. In closing, it was interesting but not worthy.