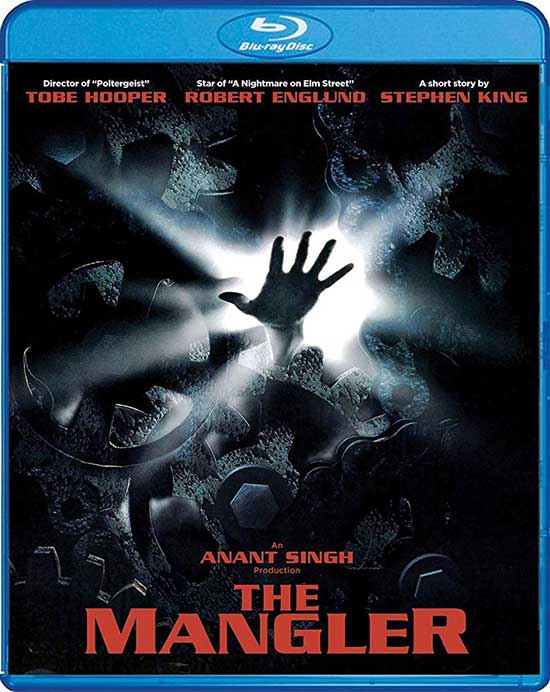 A police officer tries to stop an industrial mangler that seems to have a mind of its own that is responsible for the deaths of several people.

While a lot of people hate The Mangler I have always sort of dug it for some odd reason that I can’t quite figure out. Yeah, I’ll admit that it’s got a goofy premise and the movie itself is quite bad for a number of reasons, but at the same time it’s bad in a good way if you ask me. There are a lot of Stephen King short stories out there that went on to become bad movies (such as The Lawnmower Man-which has nothing whatsoever to do with the source material to the point King sued to get his name taken off of it-Sometimes They Come Back, and Maximum Overdrive (which I love, for the record) and The Mangler may just be the best one in my opinion. 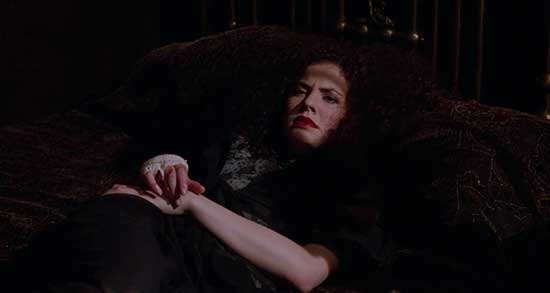 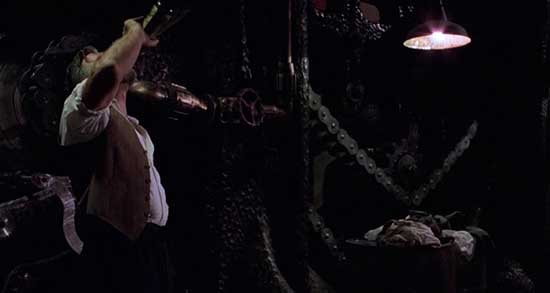 The premise is as about as simple as you can get. A cop investigates a grisly accident at an industrial laundry that involved an old lady getting folded like a sheet only to discover that the machine responsible is actually possessed by some sort of demon. To make matters worse, there also appears to be some sinister stuff going on with the family that has run the laundry for decades and the machine itself involving human sacrifices and the like. The cop is assisted by his brother-in-law (who just also happens to be a demonologist) and the two go about trying to figure out a way to stop the mangler (which gets up and starts walking around at one point) from killing anyone ever again. Sound corny? Believe me, it is, but that’s part of the fun. Throw in Robert Englund as the cantankerous Mr. Burns from The Simpsons-like owner (complete with leg braces) of the laundry chewing up scenery like there’s no tomorrow and delivering some of the hokiest dialogue ever written and you’re in for a great time! One of the things that I like about the movie is that it’s pretty much brainless for the most part, so you don’t have to think too hard about it. Just set back and enjoy as people are folded in half and torn to pieces by an evil industrial ironing machine and shut your brain off completely. 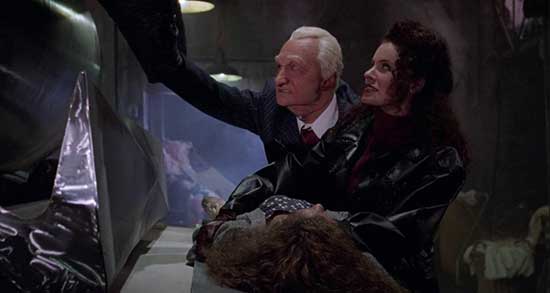 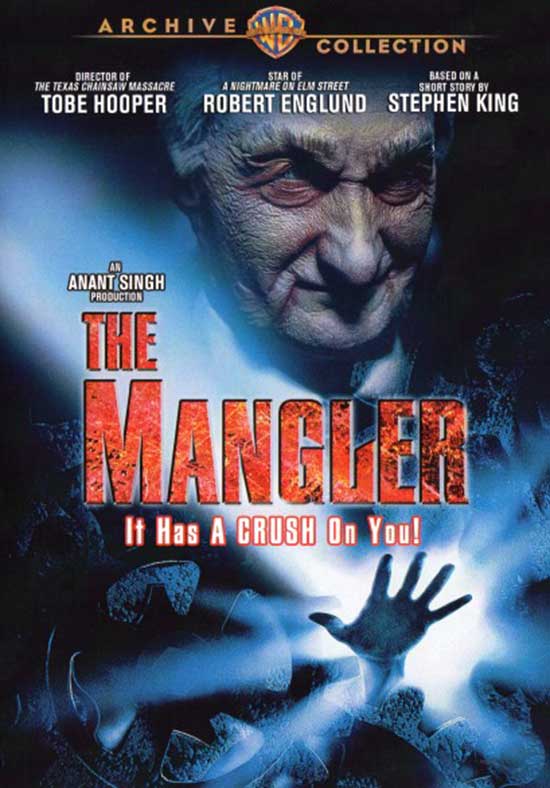 I think that the first death scene is brutal as hell and is quite disturbing. An old lady gets sucked into the mangler and is slowly folded like a sheet and just crushed to pieces in general. It would hurt like hell and the actress playing the victim really sells it. In some ways it is hard to watch because it is happening to a nice old lady but at the same time if you’re into blood and guts like I am you will no doubt enjoy it. I love the fact that we get a quick after the fact shot where we get to see her mangled body (Ha! See what I did there?) for about 2 seconds and have to say that it looks pretty decent. I personally would hate to die in such a messed-up way (as would just about anyone else on the face of the earth) and can’t imagine how painful it would be. Sadly though, this is the only person that actually dies in such a fashion in the movie as I guess the people behind the film (including director Tobe Hooper) blew most of the film’s budget on the opening death scene (though they obviously kept some of that money to the side so that the mangler could get up and run around toward the end of the film).

I thought that the cast was decent in its own weird way too. Ted Levine appears to try at times in the role of the main character John Hutton, but there are other times when it is obvious that he just wants to collect his paycheck and be on his way. Even though it is obvious that he doesn’t want to be there for about 95% of the scenes he’s involved in I still like his performance for some odd reason and actually liked the hard-boiled cop character that he plays. As I said earlier, Robert Englund chews up more scenery than the title villain as Mr. Gartley. He is made up to look older and walks around delivering lines at the top of his lungs such as “Hell’s Bells, Estelle!” and the like while he sneers at the camera as much as humanly possible. It’s obvious that he had a lot of fun with the character and was intentionally going overboard with his performance which works because he’s one of the best things about the movie. 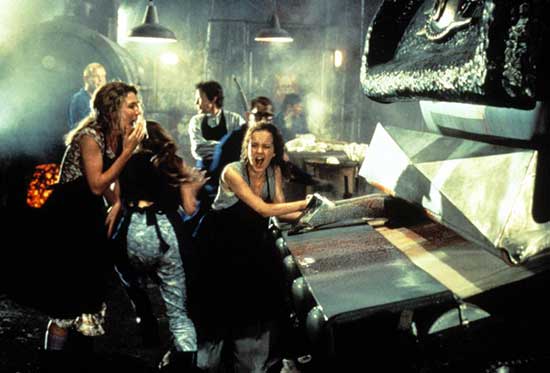 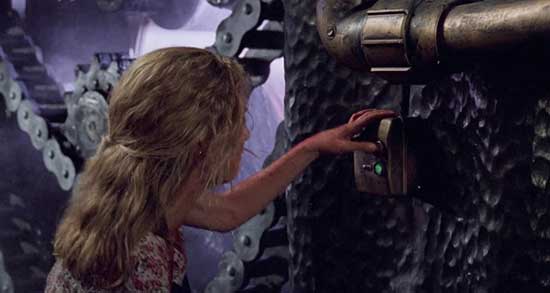 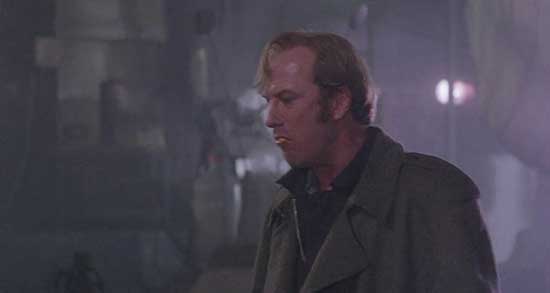 On the downside, there is almost way too much plot getting in the way of the story at times. The whole thing with the family that has run the laundry for years sacrificing family members to the mangler was a bit of a stretch but then again if you have to do a movie about a killer ironing/folding machine you would need to add something to it to pad it out to 90 minutes. The stuff with the antacids toward the end is goofy as hell as well and to the day I’m still not sure I quite get it. My advice is to not think too hard about any of these elements and instead just focus on the fact that we have Englund stumbling around in leg braces dressed like an old man screaming at people while a big machine goes around killing people. If you do that you will enjoy it as much as I did. 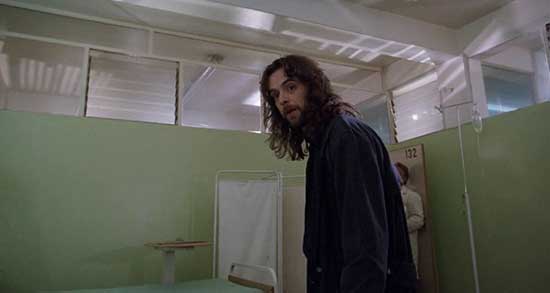 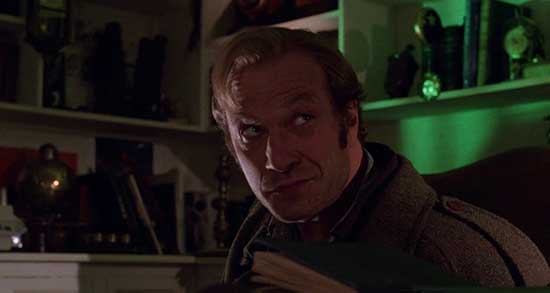 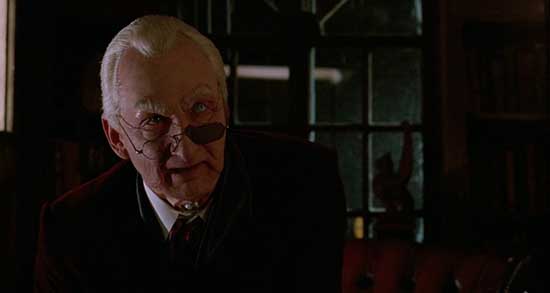 Like I said earlier, I’ll openly admit that The Mangler is mighty bad, but at the same time that’s part of its charm. It’s a fun movie in a lot of ways and even though a lot of people out there may argue that it’s just plain terrible in general with no redeeming qualities I have to disagree (this is the case with the two sequels that followed-especially the first one-but I don’t think that applies to the original film). I always compared The Mangler to Howard the Duck. Much like Howard the Duck is a movie about a talking, humanoid duck hanging out in Cleveland and going on all sorts of wacky adventures, The Mangler is about a machine that kills people and eventually gets up and starts chasing characters around. I think with both movies you know what you are going to get when you go into them, so I don’t know why most people thought both films were going to be something they weren’t. I enjoyed The Mangler for what it was and have seen a lot worse. Check it out if it sounds like something you’d be into. You may just be surprised by how much you dig it in the end if you don’t take it too seriously.