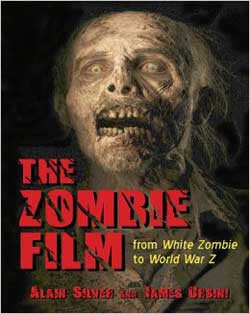 Published under Applause Books, arrives a brand new zombie filled edition by the name of “The Zombie Film: From White Zombie to World War”.

Despite the last few years being pretty busy in the zombie publishing industry, This 384 page color book is more than a welcome new edition easily put many of the others to shame. In first look, it’s filled with a number of great color photos on every page (450!!) with plenty of the zombie film images running the gamut.

This gamut is rich in itself by not only giving the classic popular zombie films their just appearance, but by featuring a whole range of obscure titles and images that might not otherwise see any print time.

This was the first signal that stood out as I took in several gut wrenching images among a smattering of horror film photos. Films like “Kiss Daddy Goodbye”, “Ghost Galleon”, “Doomed”, “Cadaverella”, “Stripperland” and “Johnny Sunshine” are “actually” mentioned in this zombie book which in this publishing genre is almost unheard of (from past book reviews). Though if those titles sound obscure, then we’re only getting started here with buckets more gaining mention in this zombie compendium.

It’s a nice change and says something about giving credit to independent releases for their contributions to the zombie.

The book is authored by Alain Silver and James Ursini who obviously have spent quite a deal of time trying to wrap the zombie genre up under 1 roof. They make the distinction from the get go about screen monsters who could easily be classified under the category of undead, which in turn categorizes them as zombies. However, and as many others have argued, zombies are more specific to a genre and shouldn’t be lumped into monsters who are demonic in nature or a class of movie monsters themselves. The book proceeds to lay out the ground work from film, to books, to comics, to magazines, with enough imagery to make every page enjoyable and interesting.

As we work our way forward from the “White Zombie” days into the newer ages, we begin to see the classifications of zombies change a bit. After all… zombies do run the gamut in horror science fiction, Asian films, war films, TV and of course the nastiest of them all “extreme cinema”.

Romero would be hailed as the new king giving away to a common theme and variations that would get regurgitated for years to come. We would begin to see the unliving in malls, schools, jungles, graveyards, castles, and of course apocalyptic settings that would leave the door open to any location.

It’s important to take-in the writings of our authors as they make these distinctions with the added bonus of high quality images to remind you of the terror and horror that has evolved and re-surfaced. The 70’s and 80’s would take this ball and run with it introducing all kinds of creative variations. Let us no forget the European influence which is also brought to light and given full credit as well.

As we weed thru these titles, the authors cleverly feature not just the mainstays but the oddities and exploitative creations. Titles like “Sugar Hill”, The Dead Don’t die”, “Toxic Zombies”, Night of the Comet”, “zombie Lake” (and many more) rub elbows with The Evil Dead franchise, The “Zombie” franchise, and the “Resident Evil” franchise. However, that’s only a fraction for what came and what is still yet to come. The latest revelation of turning on your TV Sunday nights to get some nasty gnawing per “The Walking Dead” is a staple of the genre’s progress.

In all, an outstanding book that does a great job of narrating and informing readers. I personally have received quite alot of zombie books these last 2 years and I’d put this one at the front, any day. Horror fans, this is your book! May sure you grab a copy while you still can!

Grab the book The Zombie Film: From White Zombie to World War Z