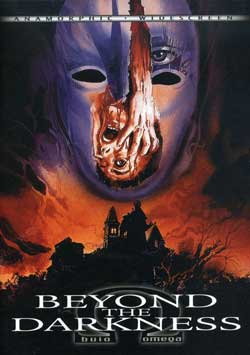 A young rich orphan loses his fiancée to voodoo doll mischief on the part of his housekeeper who is jealous of his attentions. He digs his girlfriend up, cleans her out, stuffs her, and puts her in bed at the mansion. Following this, he tries out and disposes of a series of young maidens, trying to find the right replacement for her, and the disapproving housekeeper helps him with the disposals.

When I first saw that Beyond the Darkness (or Buio Omega, which technically means Dark Holocaust, but may also be labeled as Blue Holocaust) was directed by Joe D’Amato, I had to wonder what I was getting into. Would this be along the lines of his blood and gore horror films, like Anthropophagous and Absurd (Rosso sangua), or his adult films (anything from Fatal Instinct to a number of entries in the Emanuelle “series”), or somewhere in between (P**no Holocaust, Sexy Nights of the Living Dead, etc…)? As it turns out, this one is far more horror than p*rn, but with plenty of perversions represented and on display for all to see. Yep, typical D’Amato for you. 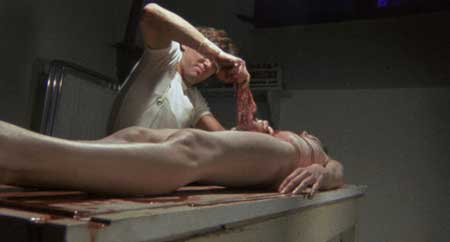 Meet Anna, a lovely young woman who is inexplicably in the hospital. As it turns out, she is the victim of an old woman’s black magic, the subject of a voodoo doll. She is also our anti-hero, Frank’s, fiancé. Quickly she succumbs to her sickness and dies, but that’s not the last we’ll see of her. Not by a long shot. You see, Frank isn’t ready to let her go quite yet. He is also a taxidermist. So, when he digs her up and brings her body home, he simply uses his skills to preserve her (in a very bloody manner) and keep her around the house, much to the chagrin of the housekeeper, Iris, whom we recognize as the person who was requesting the voodoo in the first place. So, I guess you could say Beyond the Darkness is a heartfelt love story, Joe D’Amato style. 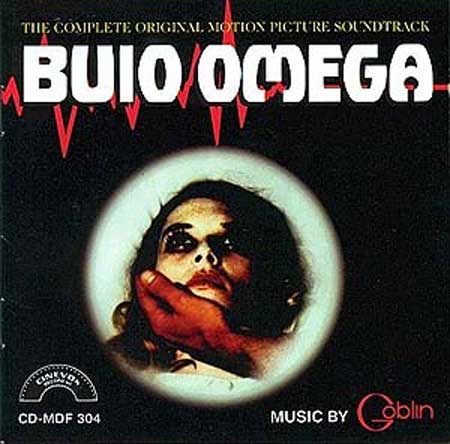 Of course, things always have a way of getting worse before they get better, don’t they? Unfortunately for Frank, a certain Mr. Kale is suspicious of him and starts snooping around the house, determined to find out what kind of mischief Frank is up to. But Frank is too busy to notice, as he already has his hands full, what with having to dispose of so many bodies after becoming a bit of a serial killer. At first, he does it out of what we’ll call “necessity;” he picks up a hitchhiker on his way back from digging up Anna, and she walks in on him removing Anna’s organs, so he has no choice but to kill her. But the next time, when he brings an injured jogger back home and they end up in bed together, could have been avoided if only he didn’t reveal Anna’s body under the covers next to them. Seems poor Frank has a bit of an issue dealing with loss. It’s a good thing he has Iris around to help him. Or is it? 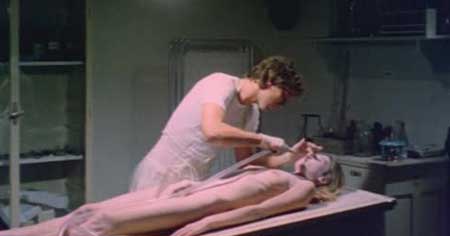 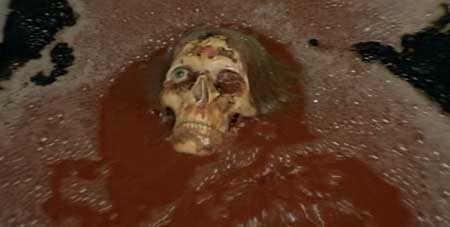 It would seem that Frank is the bad guy of the film, but right up there with him is Iris. She doesn’t flinch as they chop up the body of the hitchhiker, then melt it away in a tub of acid; Frank vomits at the thought of it. As we saw from the start, she is cold-hearted, having Anna done away with through voodoo so as to get her out of the picture. But then there’s the creepy side of Iris, the part of her that is so manipulative that she manages to convince Frank he’ll feel better if she breast feeds him, the part that becomes very Norman Bates’ “mother” as the film continues forward. By the end, we can’t say for sure who is the more messed up or who is the more evil.

There is quite a bit of nastiness in Beyond the Darkness. Aside from the implied necrophilia and the perverse relationship between Frank and Iris, we also get quite a bit of blood and gore. There’s a particularly nasty scene I alluded to earlier where Frank prepares Anna’s corpse for “stuffing(?)” in which he must remove her organs, eyes, blood, etc. There are also the other kill scenes, one of which ends in a throat torn out by human teeth. While there’s no hardcore sex scenes, D’Amato does still push the gore. 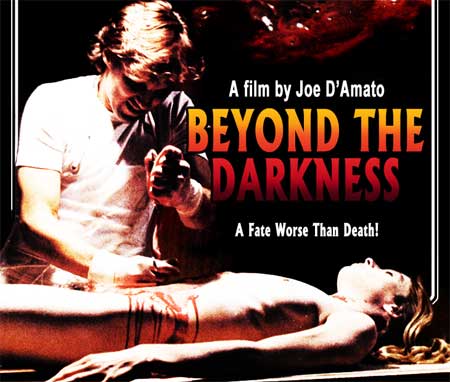 I liked this movie quite a bit. It has a very dark, ominous feel to it, something partially due to D’Amato’s style, partially due to the fact that it’s from the golden era of horror (the 1970’s), but also partially attributed to the fact that the band Goblin is on the soundtrack. In case you’re not familiar with Goblin, go listen to Dario Argento’s Suspiria soundtrack and you’ll have an idea of what to expect (and probably become an instant fan). Add in a bit of a surprise at the end, something that reminds me of, but is still very different from, a scene from Cemetery Man (Dellamorte Dellamore), and you’ve got a quality horror movie here.