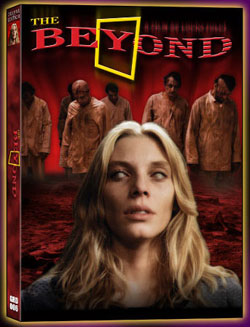 The cellar of an old hotel is built on top of the door to the beyond. Bloody zombies roam there. A young woman who is heir of the hotel wants to restaurate it. She is confronted with strange events. A painter has a lethal fall, the plumber vanishes and her friend breaks his neck. When she escapes to the hospital of a friendly doctor she doesn’t know what a nightmare is waiting there…

As we fade into 1927 Louisiana a suspected warlock is lynched and tortured with chain lashings and ultimately exiled of this earth by impaling his wrists in crucifix fashion all within the depths of an old hotel basement. The book of Eibon, a diary of the macabre is a prelude into pure evil documenting hellacious script and recording history for 1000’s of years. 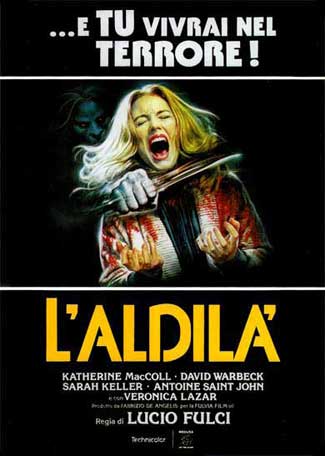 Fifty years later the hotel is left to beauty Liza (MacColl), working feverishly to restore the rustic resort. A laborer plummets twenty feet off of a scaffold after a minion of miscreant peers through the window. Just a taste of what’s severed as one by one anyone who enters the hotel under renovation checks out to a gruesome, untimely demise. Emily, a local blind woman warns Liza to leave, go back where she came from. She eludes to the dark secret of a seventh gateway to hell that is nestled within the confines of the basement. 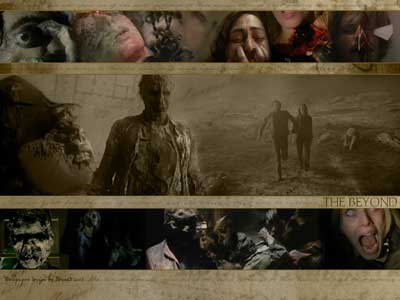 Dr. McCabe has difficulty subscribing to outlandish, hysterical claims of hell fire and brimstone. As the body count rises he intervenes in a desperate attempt that just may be the end of their lives. 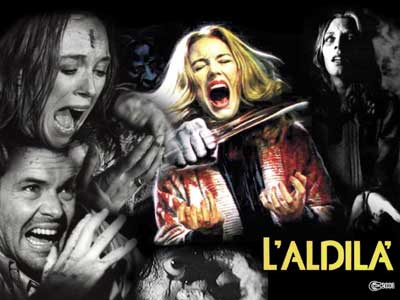 My most sound recommendation to fully enjoy The Beyond is to consciously remind yourself of its release. Remember this is a time when Reagan was in first term as president. The Exorcist was conceived a mere eight years prior, Poltergeist had not been conceived and even the original Friday the 13th was a mere year old. Pac-man was a revolutionary pop culture phenomenon.

That being said, its entirely unfair to critique this film by 2012 cinematic standards. Don’t take The Beyond too seriously, no need for reservations or expectations. Simply sit back, and enjoy your stay. 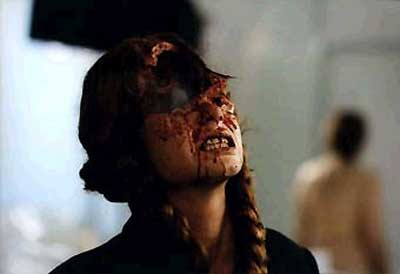 Gianetto DeRossi and Germano Natali, the special effects team delivers gore, blood and more gore. A queasy moto mentionable is when the curator of the hotel is in the town library. His unearthly departure is plagued with man eating tarantulas. An eye socket is plucked and mauled before the squeamish.

Darkened cinematography contributes to an eerie mood causing us to no less than run back from the washroom or taking out the nights trash. 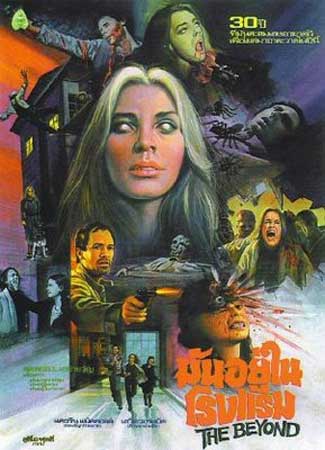 The script does somewhat lack balance and consistency as we jump precariously from scene to scene. Remember once again of the time frame and in fact this is an Italian export. From time to time there is a little lost in translation. So chin up chiller fans as the death scenes are plentiful and each is more innovative than the former. The musical score is silly at times but is congruent with the genre and is a healthy foreshadow of things to come. The sound effects are perhaps not exceptional but effective and nerve wracking as we’re held in suspense, knowing full well something is about to be unleashed but when and how? I’d give The Beyond a three out of five tombstones, just good mindless fun.