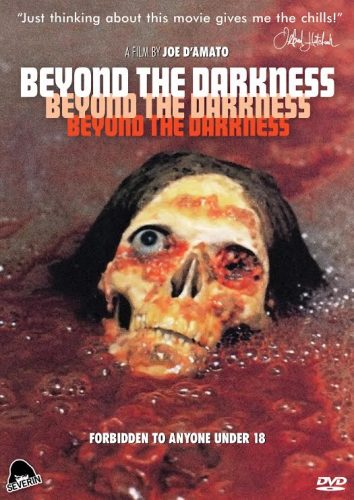 Re-released nearly 20 years after the Filmmaker Aristide Massaccesi or Joe D’Amato’s passing, comes the truly uncomfortable and disturbing love story known as Beyond the Darkness or Buried Alive or Buio Omega (take your pick) through Severin. Restored and including a wealth of bonus content, this fairy tale Romeo and Juliet sleaze fest lives up to the reputation of one of the best of its sub-genre of Italian horror even after this Severin restoration for a new generation to enjoy.

Released getting is Italian release back in 1979, Beyond the Darkness was not available in the states until 1984. For those introduced for the first time to the film (like me), I made it a point to watch this film a few times before writing my thoughts and this review. Reminding me of daytime soap operas, Beyond the Darkness is taboo drama brought to restored life. Taking in different elements upon each screening, it reminded me of a surreal and kinky fairy tale in the line of Snow White or a tragic love story such as Romeo and Juliet. Even with the restored look and Dolby Digital sound, Beyond the Darkness is just over the top and makes you feel so dirty no matter how shiny it may be now. A testament to the story, performances and boundaries pushed, the acclaim is deserved for the sleaze it creates and the feelings it invokes.

The story focuses on recluse and weird high-class man named Frank (Kieran Canter) who has lost his love Anna (Cinzia Monreale) to an untimely death. A taxidermist by trade, Frank sits in his large estate isolated and brooding. He plans to abduct Anna’s dead corpse and making her immortal in his sad and disturbed mental world. Taking the corpse from the funeral home, Anna’s family is unaware of Frank’s insanity towards their lost daughter. Preserving Anna forever, his live-in caretaker Iris (Franca Stoppi) and the local undertaker are investigating Frank’s actions and manipulating him to gain control. Frank will do anything to keep his secret, even be at Iris’s uncomfortable sexual call. As the world surrounding Frank, Iris and Anna’s corpse is crumbling, the true horror of Beyond the Darkness just gets stranger and destructive.  Beyond the truly campy and fitting performances by Stoppi and Canter. 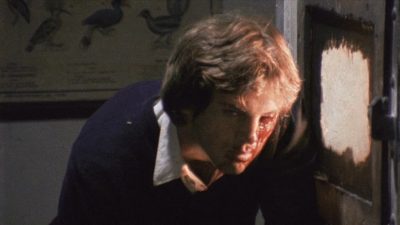 Known for his cult work for nearly three decades, D’Amato or Massaccesi (whichever you may choose) directed close 200 projects and was the DP for nearly a 170 of them over his incredible career of low budget, sexualized, gory and disturbing cinema. Having seen only a handful of his work here and there, Massaccesi’s Beyond the Darkness has been a high point for me as a fan. No matter how you may feel about a macabre and underhanded love stories like Beyond the Darkness, there is a universal connecting theme of the danger and madness found in unhealthy obsession. This is flushed out by the writer and director throughout this narrative effectively.

Beyond the Darkness features the trademark gore and bloodletting FX. Massaccesi brings Ottavio Fabbri script to life by making the gore matter instead of being gore for gore sakes. Scenes like the autopsy of Anna or the acid bath of the hitchhiker are executed with a wonderfully maniacal understanding of how a scene should unfold for maximum effect. Being the DP on Beyond the Darkness also, Massaccesi understood the importance of the reveal as well as what framing can do invoke emotion and create intimacy whether wrong or right. The visual focal point, range and lighting with practical aspects like the Anna’s dead skin or the bathtub filled with bubbling acid. Massaccesi had so many films under his belt by the time he was creating Beyond the Darkness, that you admire how he put a scene together and the craftsmanship. Especially in the restored cut of the film, the color and texture of Anna’s flesh or the acid washing over the skull that bobs up has a presence all its own. It’s memorable editing and body makeup. Beyond the Darkness is not all FX makeup however. The over the top acting and taboo boundaries of sexuality are pushed. The incest feeling between Iris and Frank. The disgust for Iris as she hounds for Frank’s love. The love after death that Frank feels for Anna makes you feel so uncomfortable and sad. Actions like Frank feeding on Iris’s breast to satisfy needs like a a baby with his mother. The cannibalism of a human heart makes you feel like you are a voyeur into the madness of this household where anything can happen and is allowed. 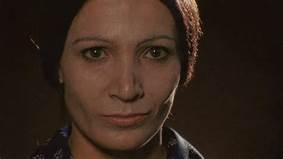 A highlight of this re-release of Beyond the Darkness is the film’s soundtrack included as part of the Blu-ray release. The soundtrack is wonderfully restored onto a CD for anyone to relive the dark and emotional tracks composed by the legendary staple of genre from the 1970’s and 1980’s Goblin. In addition to the more refined look and sound of this film, the Severin re-release offers a range of extra interviews. The extras feature more than two hours including a very candid interview with Massaccesi about his work in the genre and his recollections upon certain projects. Severin does well by the women of Beyond the Darkness also by including two very honest, humorous and insightful conversations with Cinzia Monreale (Anna) and Franca Stoppi (Iris). The re-release also has a featurette about the locations for the film as well as a special video performance by Goblin Reborn performing the score to Beyond the Darkness back in 2016.

Watching all of these extras, Severin does an incredible job in not only acquiring material like the interviews and special programs to be included but also producing their own content connected to each project. Watching the entire film and extras, you appreciate the praise for this film and why many believe that Beyond the Darkness is one of the overall best Italian Horror Movies of all time. Pick up your copy from Severin right now at a.co/4J0nQ5d and severin-films.com/ 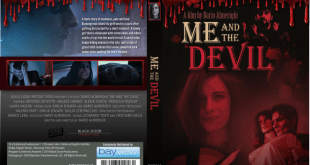