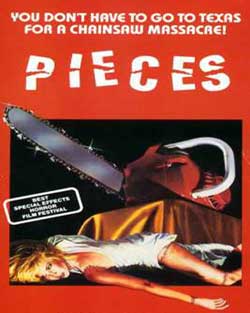 She is absolutely disgusted with her son, so she yell and berates him. The boy leaves the room for the moment as the mother starts to rummage through his things to find anything remotely crude. The boy enters the room and when his mother turns around he’s standing over her with an axe prone, in prime hacking position. By the way, what a household it has axes and nude puzzles. He begins to chop away at his mother’s skull like it’s firewood. This one opening scene is very symbolic of the movie. Blood, tits, and away we go.

Let me say first and foremost this was a personal pick of mine. In a genre rife with cinematic hits and misses, I think “Pieces” succeeds to height that very few do. It is sheer, mindless bliss and glee. I have a theory that parallels the fundamentals of the slashers films of the eighties to the hair metal band of the same era. They both for the most part are ridiculous, but they are meant to be. When Rikki Rocket would put on his eyeliner in the mirror to look at the reflection of himself in hair curlers and lime green spandex. I’m absolutely certain he doesn’t think, “My god, this is redefining music as we know it.” He knows as Piguer does that this is the rare cases of style over substances is a good thing.

You know there no such thing as too much. Why 10 gallons of blood, when you can have 20? Why stab some sex crazed teenage dipsh*t when you can disembowel him? Why show one tit when you can show two… well, I guess that’s kind of a package deal. Subtlety be damned. Excess for the sake of excess, which I find endearing.

Saying that, I grew on this stuff so this could be the nostalgia taking over. (As I write this review in my “Frankie says relax” t-shirt) The acting in this film is epically cheesy from leads to bit players. Some of the acting is so bad that it’s incredibly fascinating, you can hardly take your eyes off of it like a car wreck or a dog dry humping a stuffed animal. Stand out being Paul L. Smith who apparently spent the entire movie with a lash in his eye base off his performance. Notwithstanding maybe the most offensive asian stereotype I’ve ever seen. It comes completely out of nowhere and makes no sense. Unless, in the eighties colleges put karate on the curriculum. But for what it’s worth the film’s Italian, so blame them.

But look at it this way if they had spent more time and money on actors and script, that would be less time and money spent on blood and death scenes. Which honestly who would want that? I don’t know if this is in fact the bloodiest slasher as said on the back of the DVD cover, but it’s definitely a contender.

The blood flow is constant. Where Hooper and “Texas Chainsaw Massacre” brought the glorious power tool to the table. Pieces with a couple of advances in technology allow the chainsaw to flourish to it’s true potential. Let’s not forget about the wonderful nudity in the film. Ah, eighties nudity so innocent, so playful, so completely irrelevant to the script. Which is in my opinion is the best way. Like said before “Pieces” hits the ground running and doesn’t stop til the end. I love films with well structure storytelling and deep character development.

I even respect when a film tries yet fails to accomplishes it. But, not every horror film is meant to redefine the standards of fear. Some films are made out for just a good time. Another bit of praise, even for an 85 minute movie “Pieces” goes by exceedingly fast. Not a whole lot of exposition, it’s all setting up the next death scenes. Which is a good thing because it leaves you wanting more by the end. The story is paper thin and I could care less. It might be nostalgia but every person I’ve recommended the movie to love it. Short story long, I love this film so much that dare I say it’s my favorite slasher of all time. It’s a must see in my book. As a matter of fact, f*ck this I’m gonna go watch it right now.