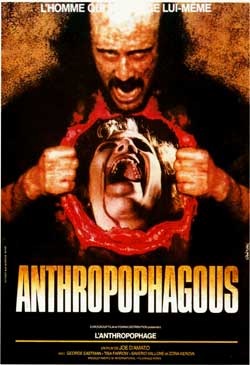 A group of friends on a sailing trip end up trapped on an abandoned island, and just when they think that things couldn’t get any worse they discover that a crazy, vicious killer has wiped out (and eaten) all of the people who had previously inhabited the island. Unfortunately the crazed killer is still on the island and he’s still hungry. Will anyone make it off the island alive?

Antropophagus refers to someone who is a cannibal, so it is little surprise that the killer that is featured in this movie enjoys eating others. For years I have heard people talk about how disturbing and disgusting this movie is, and while it isn’t nearly as hardcore as I thought that it would be (or maybe I am just so desensitized that nothing really bothers me anymore) I still enjoyed it and had a blast with it. There are a lot of brutal and gory death scenes that kept me happy, and the film itself just has an overall sense of dread about it that most viewers will find unsettling. In addition to having a creepy atmosphere, some very fun and bloody deaths, and a killer that will scare the sh*t out of some of the people that watch it, Anthropophagus is also well-written and suspenseful. 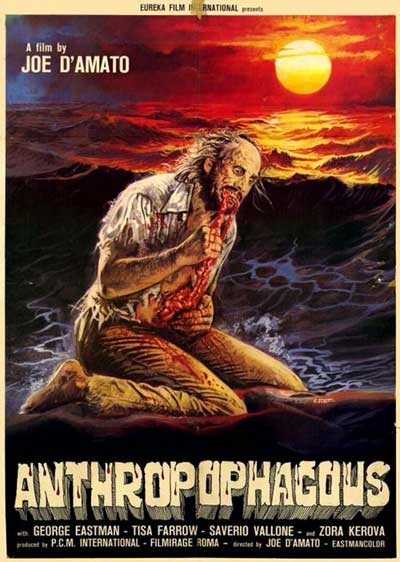 I think that it is a little ahead of its time as some of the gore effects are just unbelievably awesome and look better (and more realistic) than the CGI crap that so many movies use today (there is absolutely no excuse for using CGI blood in my opinion). Apparently some of the scenes looked a little too real as many people thought that it was a snuff film when it was released. 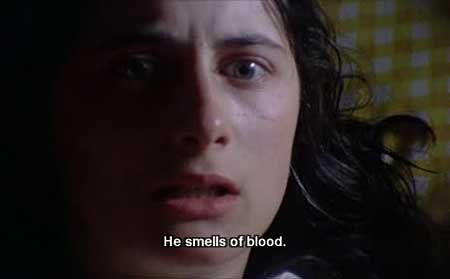 I’ve read a lot about the infamous “fetus eating” scene (the killer rips the fetus out of a pregnant woman and eats it) and this seems to be the bit that bothers the majority of viewers the most. In reality the fetus is actually a skinned rabbit, but it does look real so I am not surprised that so many people thought that it was an actual fetus. This scene is pretty messed up and is guaranteed to really bother the squeamish. I don’t want to ruin any of the other gory moments for you if you haven’t seen it, but let’s just say that there is a lot of stuff in this film that will satisfy the gorehounds, and one of the other scenes that really stands out for me involves something that the killer does to himself at the very end that stays with you for a couple of days after you’ve watched it. Needless to say this is a pretty violent movie so if you have a weak stomach you may want to stay away from it as there are a handful of scenes that will bother you. 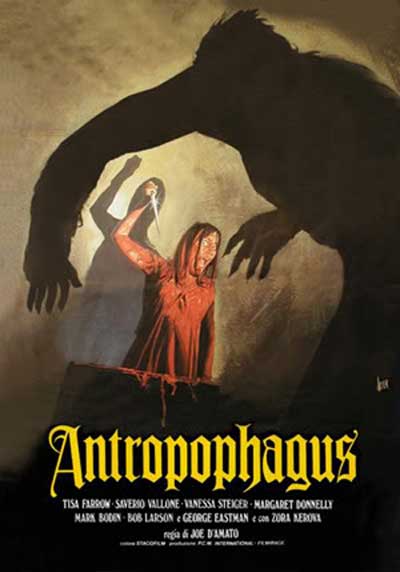 I also really liked the killer, as well as his back story. I don’t really want to say too much about his origin as it is pretty damn cool and I think that viewers should find out what it is for themselves, but I will say that it involves him doing something that many people will find disturbing. This guy is one brutal bastard, and he doesn’t play around at all (he killed everyone who lived on the island except for one person, so you know he’s a dangerous guy). Not only does he use a variety of weapons such as a meat clever to dispatch his victims, but he also isn’t above using his bare hands (as he does with previously mentioned fetus scene) and his teeth when he has to. Beyond that he is creepy-looking dude that I sure as hell wouldn’t want to encounter alone in a dark alley. 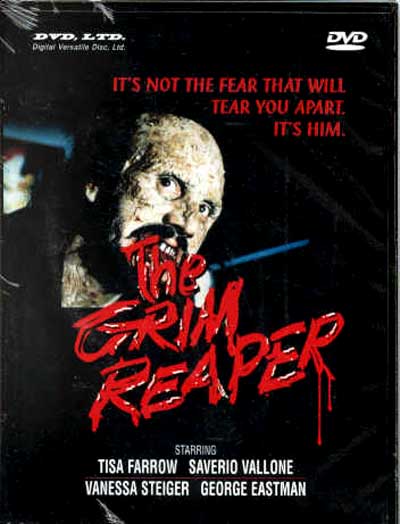 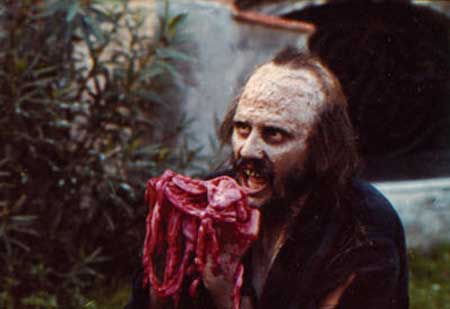 While it may start off a little slow after the initial death scene I still enjoyed Anthropophagus. I don’t think that it is for everyone but those of you out there like me who love bloody slasher flicks will really dig it. If you get the chance to see it then I recommend that you check it out.