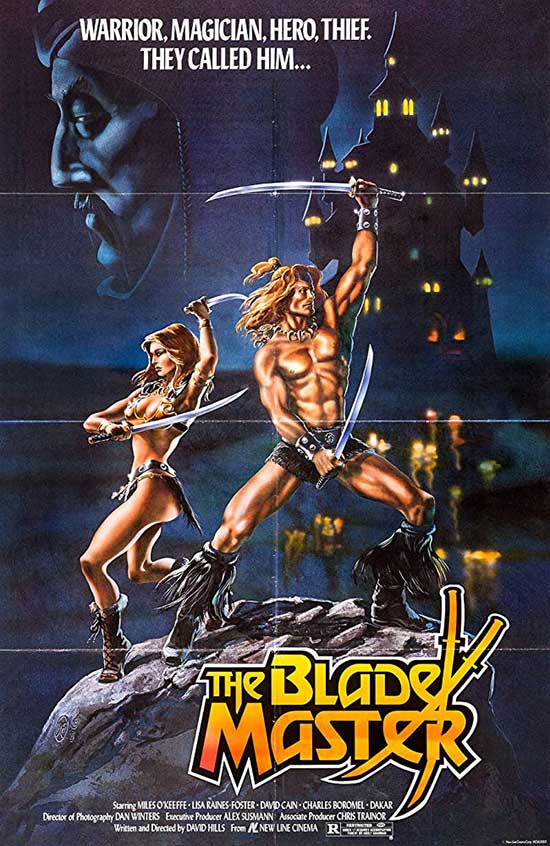 Muscle-bound Ator and his mute East Asian sidekick travel from the ends of the earth to save his aged mentor from the evil, mustachioed Zor.

If one thing that you can count on is that whenever a movie becomes popular, it’s that about a bazillion cheap rip-offs of it being made. It’s like death and taxes: unavoidable no matter what you do. Look at how many low budget Star Wars knockoffs came out after that film’s success. The number of flicks that came out after Home Alone’s release that centered on a clever kid being forced to set elaborate and cartoonish booby traps to confound criminals was just ridiculous. In the 80’s, you couldn’t go to a video store without facing a wall of tapes of movies that were ripping off either the Road Warrior or Conan the Barbarian. The Italian movie industry was notorious for pumping out these clones of more successful films, and it is from them that we get the Blade Master, a more family-friendly Conan the Barbarian wannabe centering on the heroic Ator. 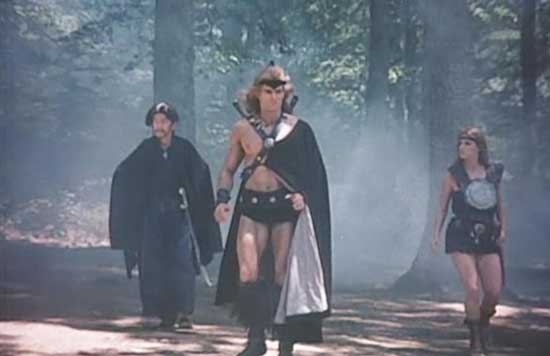 The second of the Ator movies, The Blade Master begins after Akronas, Ator’s one-time mentor, discovers the Geometric Nucleus. It’s never explained what it does, only that it has immense power and can be used as a weapon of incredible destructive power. So, he’s basically like one of those scientists who says he built a murder bot for peaceful purposes. When he discovers that the warlord Zor coming to his castle, Akronas sends his daughter away to find Ator and bring him back to help defeat Zor before he can get the Nucleus for himself. Soon the young lass meets up with Ator, who appears to have an allergy to wearing shirts, and convinces the hero and his mute Asian sidekick to go fight the bad guys. Soon Ator’s forced to fight invisible assassins, face cave people looking to sacrifice women to their gods, and keep a straight face whenever Zor tries to be menacing.

It’s hard to know where to begin with this movie because it does so much wrong. The backstory to the making of this flick is that it was made without a completed script, and it shows. A chunk of time near the beginning is a montage explaining the events of the first movie, just so they had something to put on the screen. The dialogue would vary from being stilted to outright terrible. It seemed like events would take place just so things would happen, with not a whole of logic or cohesiveness to go along with it. What story or plot there is just barely there, and as a PG movie, it didn’t have the exploitation elements some filmmakers like to use to distract audiences. Sadly, those same elements would have at least made The Blade Master at least remotely interesting. 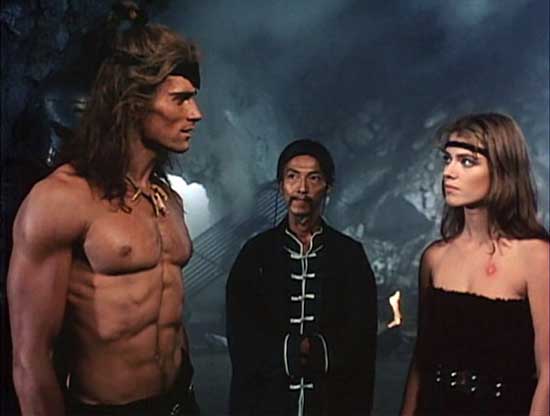 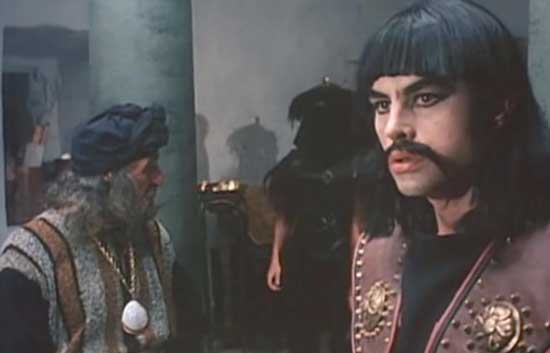 The film is filled with all kinds of mistakes that are too hard to ignore. Things like the caveman that’s wearing sunglasses in one scene (you can catch it if you’re paying attention), or the modern-day city you can see in the background while Ator his hand gliding, or the tire tracks from a truck you can clearly see on the ground. Those gaffs have become notorious thanks for an early episode of the original Mystery Science Theater 3000 series where they lampooned this turkey. It just exposes how rushed and sloppily made The Blade Master was.

Speaking of sloppy, the costumes and makeup must be mentioned, if only to point out how absolutely cheap they were. Calling the costumes slap-dash would be doing them a favor since they looked wretched. For instance, you’ll see someone where armor that appears to just be leather with a metal dinner plate attached to the front. You can also tell when someone is wearing a wig or fake mustache (looking at you, Zor), and it looks like some of the actors had their makeup applied by blind people that just started their first year at a beautician school. I’d call it amateurish, but that’d be more of a compliment that it deserves. 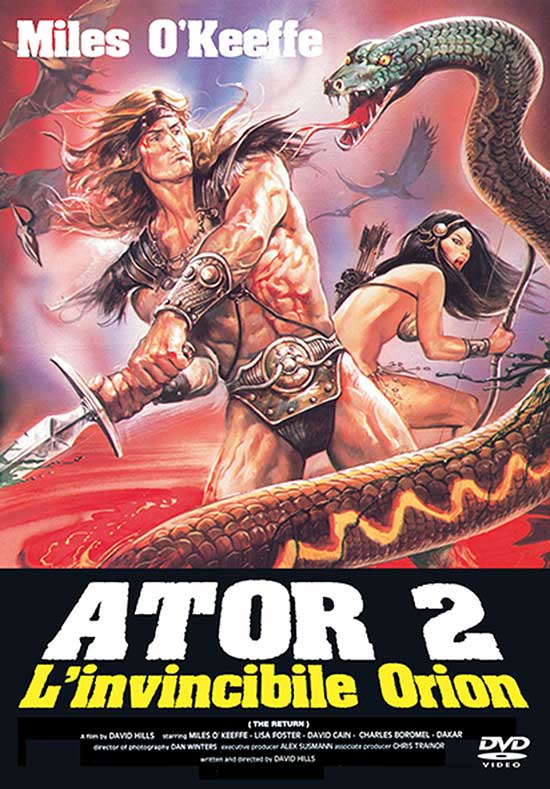 Things don’t get any better in the acting department. Everyone was so wooden that it I almost believed that they were marionettes that had been brought to life. Not a single person showed any ability to appear natural or show any genuine emotion. This includes lead actor Miles O’Keeffe, but then, he was never known for his skills as a thespian. I hate to say that about him since it sounds like he’s actually a really nice guy in person, and there is something likable about him that makes him tolerable. 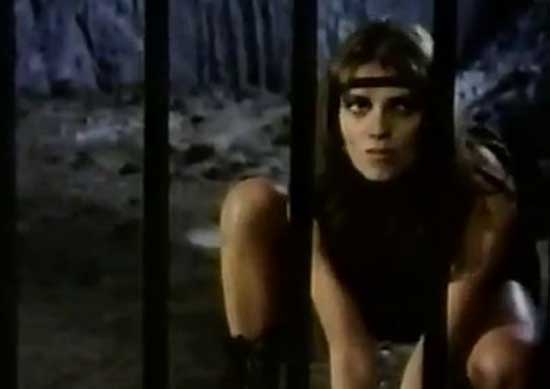 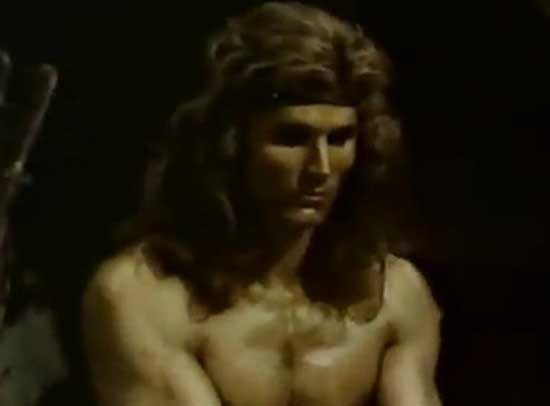 This movie doesn’t have anything to redeem it. There’s not an aspect of the film I found enjoyable, and there wasn’t any kind of charm or goofiness to at least put it in the “so bad it’s good” category. It’s just bad. The only way to watch this movie and have it be tolerable is to watch the previously mentioned episode of Mystery Science Theater 3000 (where the movie was shown under another of its alternate titles, The Cave Dwellers). In fact, I recommend watching that episode because it is one of their all-time classics. Even Miles O’Keeffe himself thought so and actually contacted the MST3K crew to ask for a copy after it first aired. I do not, however, advise recommend watching it by yourself unless you like misery.