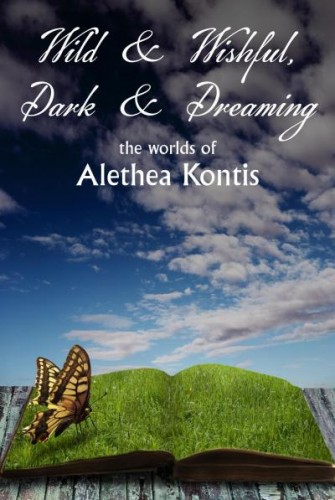 Princesses are not meant to pickup slimy, spit covered things from an animal’s mouth, especially if that animal is a scary ghost-demon wearing a crown of smoldering napalm.

-“Diary of a Ghost’s Mistress”

Before anything else is said, please note that both the title and cover art are at best uninspired and are not particularly representative of the contents. Remember what momma said about books and covers, dearhearts.

Alethea Kontis is one of those authors whose name I’ve heard bandied about by almost everyone I know. I’ve been told of her prowess with fairy tales and manipulation of voice. I’ve seen more pictures of her at every convention I couldn’t afford to go to, hanging with people I would die to brush across the merest presence of, than I care to admit. Publishers, writers and readers seem to adore her. And yet, I’ve never read anything beyond a short story or two. Certainly not enough to get a sense of her as a writer. Then this collection finds its way across my desk.

Like any good collection, WWDD provides a solid view of the various facets of Alethea’s writing. And she does keep herself varied. I expected, largely due to the princess tiaras she is rarely seen without, a heavy focus on Disney level fantasy. I wasn’t expecting some rather dark existential horror. Or a bit of Bradbury style Sci-fi. Then there was the love letter to Willy Wonka. Who the hell expects that?

Let’s start with my dearest love, the horror. Oh, the horror. If you read Apex’s Dark Faith, then you know how mean “The God of Last Moments” is. Painfully harsh, but personally beautiful. Then there is the stark, creeping moroseness of “The Witch of Black Mountain.” Or the giddy joy of “The Monster & Mrs. Blake.” Or the heartache and dread of “Diary of a Ghost’s Mistress.” These aren’t gory tales, but don’t let that fool you into thinking this pixie holds back in any way.

On to the Sci-fi. “Savage Planet” is a particularly cheesy title, especially considering the tie to a character. Personally, I think that “There are spiders in the sun” (a castoff line from the story) would have made a better title for both the story and the collection. But it carries a very personable sensibility that far too much of its genre lacks. In fact, her sci-fi, as a whole, is so solidly anchored in the characters over the technology that I tended to forget that I was indeed reading science fiction. You can see why I compared her to Bradbury, I’m sure.

Fairy tales. Fairy tales. What can I say about her fairy tales? That sense of wonder and amazement, as well as abundant hope, swells and bursts in every tale here. She holds dear to the oral tradition they are born from. Her voice (and I do not mean this in a literary but a purely literal sense) pours from the page. I could picture each story here being read to me, bedside, by my mother in those lost days of shorter legs. I get the sense that every story is, to her, a tale of the fae in some way or another. How else could she work that line at the top of this review into a ghost story.

But, if you want stories based in the small, individual struggles against the self. Tight, tiny delvings into conflicted minds. And a sense that, most of the time, there is some kind of light, dim as it may be, beckoning at the end of the tunnel. Well, then, you won’t go wrong here.