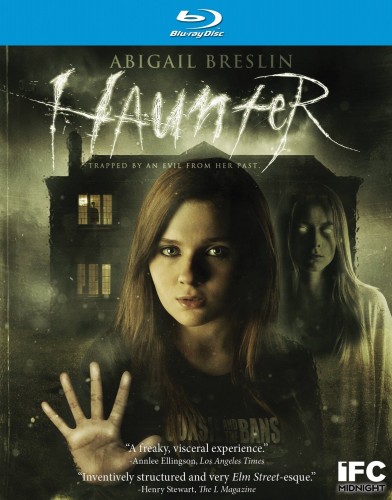 Every morning, young Lisa Johnson wakes up to the same message from her young brother over the intercom calling her to join him in play. Every morning is the same, the day before her sixteenth birthday, a birthday that never comes. Slowly she comes to realize she is trapped in a realm between life and death – and that there are others trapped along with her family, including a horrifying murderer posing as her brother’s imaginary friend, Edgar.

With his film Haunter, director Vincenzo Natali has crafter another intelligent, entertaining and creepy mini-masterpiece of horror. Much like Cube from 1997 and Splice ten years later, Natali attacks his subject with originality and vision. In Haunter, he examines ghost stories, the final girl and modern horror cinema tropes with a skewed perspective that is fascinating and curious. His heroine, Lisa Johnson, is a ghost with a past who becomes awakened to her dilemma. It plays out with shades of The Others from 2001 and similar films where this revelation is reserved for the twist at the end, except she begins the film coming to this conclusion becoming far more proactive and aware as the film progresses.

Abigail Breslin plays young Ms. Johnson with a terrific sense of desperation, sadness and determination. Much of the film is her struggle to come to terms with her state of existence, then trying to convince others, then dealing with the bigger problem – the horror behind it all. Stephen McHattie plays the film’s villain Edgar, credited as The Pale Man making a great entrance and maintaining a foreboding and frightening presence throughout. The conflicts are what drive the remainder of the film, not only the good versus evil battle on the surface as Lisa tries to stop the Pale Man from killing again, but dealing with disappointment, dealing with being trapped, and the determination and drive to change everything – to take charge of one’s own destiny and the sacrifices that may have to be made in order to do so. 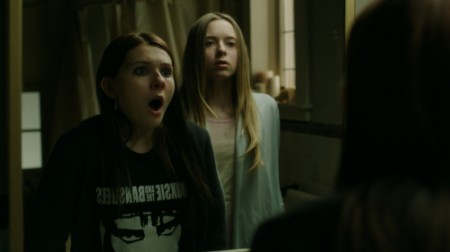 Lisa Johnson is at the center of Haunter as she realizes that she is likely dead and trapped in a horrific, ground-hog-day loop on the day before her sixteenth birthday. She, and her family who are trapped with her but unaware, are riding an unending loop. As much as she is frustrated with the never ending predictability day after day, she is far more horrified when her probing into what lies beyond their home causes things to stray away form the norm, resulting in her father becoming violent and her brother frightened. Then, the Pale Man arrives with a warning. But it is too late, Lisa is too curious to stop, she continues to reach out with a Ouija board to another teen girl named Olivia, who is alive and well, living in the same house, in the present. Lisa soon discovers how the Pale Man possessed the father in order to kill her entire family. She faces not only the horrors of her purgatory, but the events that led to her death and the man responsible, the Pale Man. She also confronts the jeopardy she places her own spirit, and those of her family, if she continues to warn Olivia. 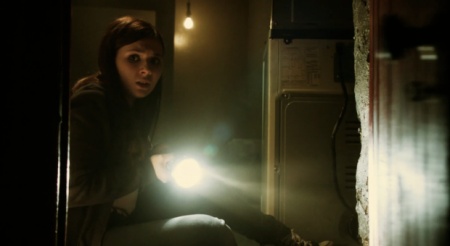 Abigail Breslin continues to make a strong impression with interesting and complex roles in horror films. Launching from the starring role in Little Miss Sunshine, she is forever remembered in horror as Little Rock from Zombieland as she moved into the genre. From there she is also in 2013’s The Call opposite Halle Berry holding her own and in Ender’s Game with films like Final Girl and Maggie on the horizon, the latter staring along side Arnold Schwarzenegger in his first zombie film. She always brings an intelligence and strength to her roles and this is no exception. But there is also a sense of vulnerability that gives Lisa a great deal of depth. Her actions do not come lightly, she has to overcome fear, insecurities and the unknown. There is a time when the character nearly buckles to the fear of condemning her family to who knows what, hell or worse by her actions; she nearly collapses in fear and uncertainty, only to later, triumphantly, regains her strength and her footing facing her fears and the Pale Man. It is far more complex than simply having to just survive, to be just a final girl; with Breslin’s performance, there is a sense of sacrifice and consequences – to do what is right comes with a price. 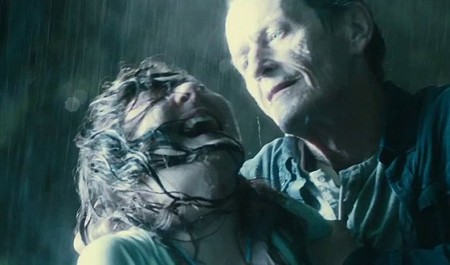 Stephen McHattie is another actor who gains favor with every new performance and his Pale Man is one of his finest, his version of Freddy Kruger. He has a aura of doom about his character that is chilling and frightening, a titled glance and a slow, determined, gruffed voice and a cool, calculated demeanor. He gives the Pale Man an authoritative sense of pure evil, a patient “I’ve got you and there’s nothing you can do about it” air of dread. McHattie is able to give the role a similar sense of terror as horror icons from the 80’s and 90’s without having to rely on throwaway catch phrases, although he does have a great line with “I always do enjoy killing you!” It is always great to see Stephen McHattie in a genre film and Haunter is no exception – it may even be a favorite. 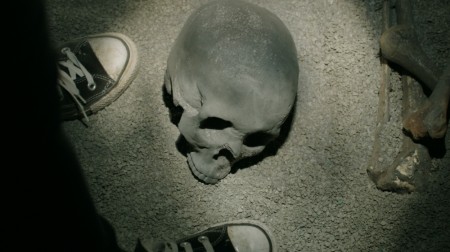 The early reference to A Nightmare on Elm Street comes with an obvious comparison between the Pale Man and Freddy Kruger. Writer-Director Vincenzo Natali crafts a similar creature in Haunter as Wes Craven did in his never-ending franchise. The Pale Man is a far more mature version of that character, reaching out from beyond the grave to terrorize new victims within a dream like way. The similarities end quickly with how the characters diverge in their methods, but the constructs of Natali’s story invite the comparison in the way it focuses on a lead girl who, in effect, has dreams of the killer and can be killed by him. While Natali builds a more complex and ghost-derived variation on the theme, it somehow lacks that punch the classic Craven film created. And that is a shame. Haunter deserves to be discovered and Natali’s direction is superb. He builds suspense marvelously by establishing a repetition, a specific environment, then upsetting it, turning it on its head. He handles the different “realities” with ease and clarity spinning the idea of who is haunting whom and what defines haunted. The only thing the film lacks, for better or for worse, is the signature device or characteristic to the Pale Man that would enable him to become the instantly recognizable villain. While The Pale Man succeeds within the constraints of the story, the character struggles to transcend its own place in the film. Regardless, Natali has crafted a superior film that defies the need to conform. 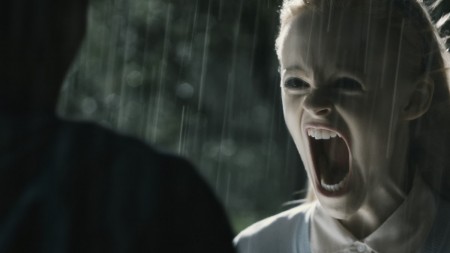 Haunter is a big surprise, a minor ghostly masterpiece – one that will likely get overlooked by many. It should not. The intelligent script takes a fascinating look at the whole concept of what a ghost is, drawing on the conceit that many ghosts are reliving their lives over and over. Writer-director Vincenzo Natali runs with the idea of what if the ghost suddenly realized she was a ghost and tried to do something about it. Add to that the ghost of the killer responsible for her death now has her trapped in her horrifying purgatory only to realize he is set to kill again – and that she might possibly be able to stop him but at great risk. Abigail Breslin and Stephen McHattie are fantastic as the leads with Breslin bringing an exceptional and welcomed depth to the role while McHattie brings his usual creepy charm to The Pale Man. Haunter has all the makings of a classic horror film but refuses to conform to high marketing concepts to over sell and over saturate its key villain. Instead Natali focuses on the complex challenges, conflicts and choices that face its lead character, the very normal, Lisa Johnson. Never getting a deserved theatrical release, Haunter from IFC films is currently available on VOD and should not be missed now or when it become available on DVD and BluRay in the coming months.

Haunter is now available on bluray per IFC Films Entertainment