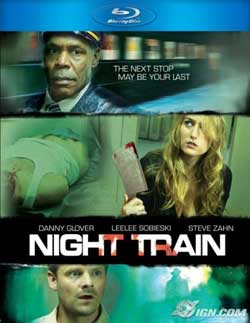 A med student (Leelee Sobieski), a salesman (Steve Zahn) and a train conductor (Danny Glover) become unlikely allies when a passenger dies on their night train, leaving behind a fortune in diamonds. Deciding to dump the body and split the loot, the trio embarks on a gruesome mission. Disposing of the corpse, however, proves to be tricky, and the conspirators become increasingly fearful of one another in this Brian King-helmed action thriller.

While watching “Night Train” I couldn’t help but feel like I was watching an episode of “The Twilight Zone”. This story would have been better suited for a show like that rather than being a feature film. It was a bit stretched out and I had problems with the convoluted ending but with such a strong cast that features Danny Glover and Leelee Sobieski, I couldn’t help but enjoy these actors turning in a couple of strong performances, especially since it seems like a very long time since I have liked anything they have been in. And did I mention that “Rocky Horror’s” Richard O’Brien plays a prissy old lady? Maybe that has your attention.

The film begins with a mysterious stranger with a package, that he is very protective of, boarding the train. After popping a handful of pills and downing some vodka, he ends up dead. Three complete strangers, the trains conductor Miles (Danny Glover), the med student Chloe (Leelee Sobieski), and the quick lipped salesman Peter (Steve Zahn), are the only witnesses to the body. They find in his possession a box that contains millions in riches. Greed overtakes them all after looking inside the locked box. Miles has second thoughts but the other two are quick to come up with ways of disposing of the body and splitting the booty between them. Miles agrees and the three must try to ditch the body without any of the other passengers on the sparsely populated train catching on to their plan.

The movie starts right away and doesn’t waste any time setting up the mystery. The contents of the box differs from person to person viewing it, what they want to see. It’s a wicked pandora’s box that consumes the soul with greed for any who look inside the box. This was an interesting twist, adding a supernatural element to the proceedings as bodies begin to pile up and the three strangers will stop at nothing, even if it means betraying each other, to make off with the box.

This movie has a lot going for it and the cast goes all out in order make this a film worth watching. Some of them excel, some are just satisfactory, while others are just not utilized to their full potential. It’s a shame that Richard O’Brien’s Mrs. Froy was never more than a useless plot device to try and be strange and just comes off as a forced attempt. Steve Zahn did his job and did it well. His Peter was a fast talking, alcoholic and it worked, it’s just that he is usually a bit more energetic in his characters and he seemed a bit subdued here and the character needed more energy. Danny Glover gave his all and really bit into the character. He has a knack for saying a million things with one look and adds to your connection and helps you to buy into the story. He is the voice of reason even though he makes the wrong choices. Leelee Sobieski shines here, the quiet, timid, med student that slowly goes from one extreme to the other. She’s able to
balance the transformation with class, she is sexy and scary all at the same time. The supporting cast is just there and it’s a shame since they should be playing a larger role in the story.

Director M. Brian King gave the film a dream-like look to it while the train itself is a character and looking at it’s interior you get the feeling that this takes place YEARS ago, but it does seem to be set in present day. It really didn’t matter, it still looks great. Other than the train, we don’t see much else other than some CGI snow blowing around, and there is a lot of it. My only issue with the film is that in the last fifteen minutes or so, the film unravels and the ending just didn’t live up to expectations. I don’t mind an open ending but this one just left it and there were too many questions not answered and the ending was rubbish.

“Night Train” is a fun suspenseful ride that lost its way in the final moments. There is much to like and it is worth a view or two, if only to watch Sobieski steal her scenes and to look incredibly hot. Some folks love the ending, i found it to be way more confusing than it should have been and unconvincing as part of the bigger picture. This is a good thriller that if tightened and had a different ending could have been a great “Twilight Zone” episode but instead an above average DTV entry that is certainly worth a look.