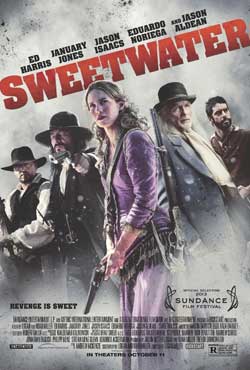 In the late 1800s, a fanatical religious leader, a renegade Sheriff, and a former prostitute collide in a blood triangle on the rugged plains of the New Mexico Territory.

I never know what to expect when taking on a Western for review. There of course are those films that are “true” Westerns with the usual gunfights, law men, and cactus terrain and then there are the more interesting of the bunch…..those offbeat western-set films. The 1800’s seems like the perfect time for these films to unfold. One of which is a new thriller Western titled “Sweetwater“. 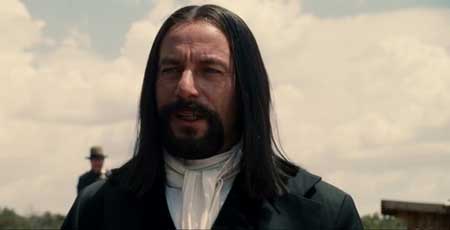 Now the cover does mention that it’s a film much in the vein of something to come out of the Cohen Brother and Tarantino. Although I never tend to take the word of cover quotes, I do have to say it does fit into that category quite well. Creators Logan Miller and Noah Miller have put together one fantastic piece indeed! I’d have to say, if you enjoy films like “The Scarlet Worm” and “No Country for Old Men”, then you’ll really dig this one! 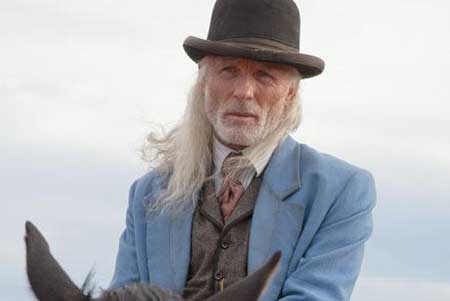 The highlights here are the ying and yang protagonist and antagonist relationship of Ed Harris as Sheriff Jackson and Jason Isaacs as Prophet Josiah. However, it is Josiah who begins this offbeat film with his mix of Lord based ministry speak and much darker persona that wastes no time in killing, raping and doing it all in the name of his church “Holy land”. Jason Isaacs who we all know from the Potter films as Lucius Malfoy is one mean son-of-a-bitch. In fact, seeing him in his latest role as Josiah, I have become a firm believer that Isaacs will continue on his path to greater and more powerful things. He instantly smashes the role and comes out a winner as believable and diabolical. Need I say more?

When 2 traveling trespassers happen upon his land, Josiah wastes no time in putting them down and leaving them for dead. Things only get worse as Josiah flaunts his riches under the guise of his holy commune. He also manages to make enemies of his nearby neighbor (Eduardo Noriega) Miguel. Miguel and his wife (January Jones) Sarah Ramírez just want a peaceful existence. They work hard and take each day 1 at a time, though when they confront Josiah about his wandering sheep responsible for eating some of their garden, things get ugly. 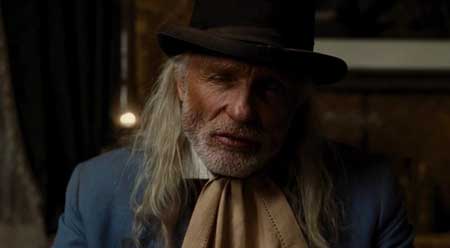 Trouble seems to follow pretty quickly after as Ed Harris rolls into town to take up the new position of local sheriff. Cornelius Jackson, they call him, a quirky, hardcore and peculiar force to reckon with who has been sent out on assignment. Jackson takes boot to the existing sheriff , Kingfisher and calls law and order on the town as he seeks out answers to what happened to his traveling cousins. 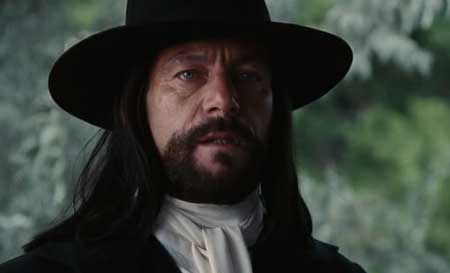 The film quickly takes shape as Sarah becomes empowered after taking about as much as she can stand for and sets out on a revenge quest. Jackson who applies his investigative techniques tries to put a few pieces together into what has been going on within this town. As the body count rises, “Sweetwater” cleverly combines the action of the old west, with dark humor and a classic battle to the finish.

It all works hand in hand really nicely in a way that reminds me of the classic confrontation films of yesterday. Anyone who is paying attention will notes that this film has a very rich cast of fine actors that only provided the stunning base that the director Logan Miller and his brother set out to make. January Jones is stunning as a screen beauty and a gun toting femme fatale. 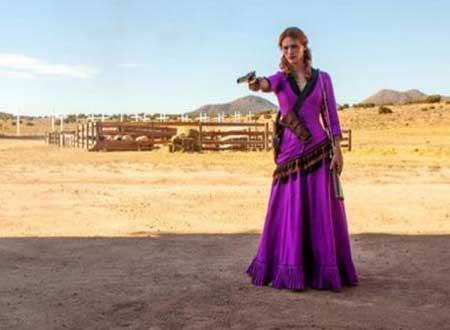 I’m calling this a must see for fans of the genre. It is sure to be a cult film in its own right and is definitely worth a few viewings.

With all that is said, I hope to see much more from this film team as it really is a fantastic film!

Sweetwater is now available on bluray per Arc Entertainment