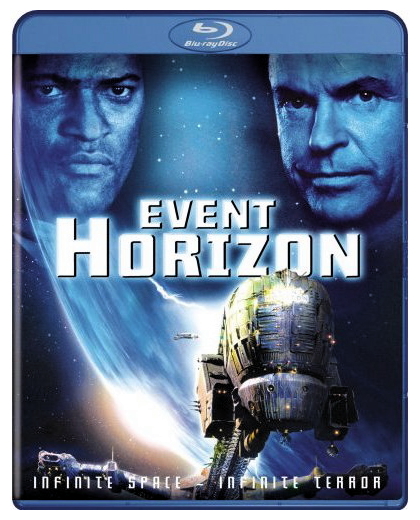 “The year is 2047 and a ship named the Event Horizon has re-appeared after disappearing seven years prior, in experiments for faster-than-light travel. A rescue hastily speeds to the returned vessel after a transmission was picked up from the ship, garbled, but vaguely resembling a human voice. As the crew reach the ship, and spend longer on it, it appears that someone or something is toying with them and, more to the question, what has the Event Horizon become?” (courtesy IMDB)

In a nutshell, director Paul W.S. Anderson is a fanboy-filmmaker with an obsession for video games and Alien (1979) movies. Several of Anderson’s efforts have become personal favourites of mine, guilty pleasures you might say. Winner of absolutely no Academy Awards, he never really seemed to crave such acclaim, and simply concentrates on efficiently delivering a couple of hours of entertainment and little more. Sometimes it works – Mortal Kombat (1995), Resident Evil (2002), AVP Alien Versus Predator (2004), DOA Dead Or Alive (2007) – and sometime it flounders – Soldier (1998), Drift (2006), Death Race (2008). What does one expect from a derivative director like Anderson? His earlier efforts are quite enjoyable popcorn fare, even AVP. It may have been a lesser Alien film, but it was a darn good Predator film. Hell, it looks like Citizen Kane (1941) compared to Alien Versus Predator II: Requiem (2007)! Oops, I’m digressing already. After the success of Mortal Kombat, Anderson was suddenly in demand, and turned down films like Mortal Kombat Annihilation (1997), Alien Resurrection (1997) and X-Men (2000) in order to direct something both fresh and violent: Event Horizon (1997).

The release date had already been set but Anderson agreed anyway, despite the fact that the deadline meant that the post-production period was severely reduced. This was the primary cause for troubles during the production, particularly when Anderson had to decide on the final cut. Event Horizon is by no means the ‘non-event’ that its harshest critics would have you believe, although you’d be forgiven for not expecting genius from Anderson. It may be crap to some, albeit spectacularly conceived and well-executed crap. Combining fantastic production values, a determinedly grim atmosphere, black holes, plot holes, plenty of gore, slick photography from Aliens (1987) cinematographer Adrian Biddle, and a funky techno score by Michael Kamen with electronica duo Orbital, Event Horizon is an effectively hokey but consistent nasty genre-mongrel that blatantly borrows ideas from many under-siege-by-hostile-unknown-force movies. Screenwriter Philip Eisner pitched his script (originally titled The Stars My Destination) simply as The Shining (1980) in space but, in my humble yet always correct opinion, the resulting film has more in common with Solaris (1972) and The Legend Of Hell House (1973). 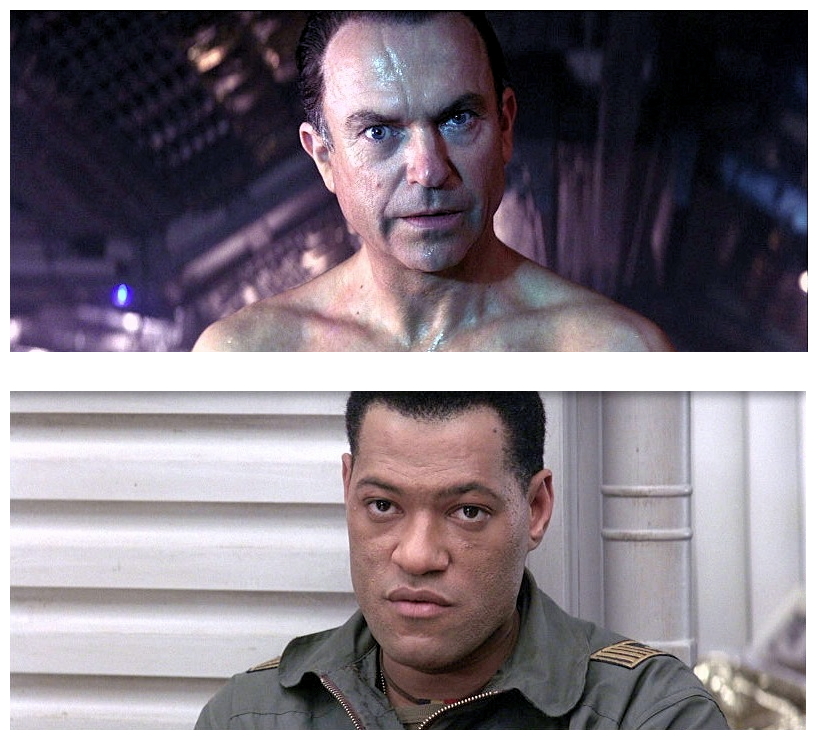 In the year 2040, the experimental deep space exploration vessel Event Horizon vanishes somewhere near neptune only to return mysteriously seven years later. A rescue team is sent to investigate, including Captain Miller (Laurence Fishburne), Lieutenant Starck (Joely Richardson), pilot Smith (Sean Pertwee), engineer Justin (Jack Noseworthy), medics D.J. (Jason Isaacs) and Peters (Kathleen Quinlan), and William Weir (Sam Neill), the designer of the Event Horizon. Once aboard the deserted spaceship, a blood-spattered bridge and pervading sense of evil begs the question: Where has the ship been, and what unwholesome terrors has it brought back? Okay, that’s two questions. While Weir explains to the uninitiated about folding space and faster-than-light travel – in a sequence that would be copied in Interstellar (2014) – D.J. just happens to be fluent in Latin and conveniently translates the crew’s garbled final message as, “Save yourselves from Hell.” One look at the ship makes it obvious that the Event Horizon has not only been to Hell and back, it looks like it was constructed there too.

Subtlety is not the film’s strongest point, evidenced by the spaceship’s deliberately sinister design and cathedral-like sets. With an interior that feels like a meat-grinder, cruciform observation ports, and a gravity drive that looks like a gigantic gyroscopic golf-ball contraption adorned with wicked metal teeth, it looks more like a medieval torture chamber than a modern spacecraft (horror maestro Clive Barker was called in as a consultant). Anyway, the crew work out that the ship’s gravity drive must have somehow opened a portal to another dimension, and Starck believes that the ship has somehow become sentient, tormenting its occupants in an attempt to kill them or lure them back through the portal. The cast is uniformly good, many of them known for their roles in other genre films. Sam Neill started his film career as the adult Damien in The Omen III The Final Conflict (1981) and is best known for his roles in Dead Calm (1989), the Jurassic Park (1993) franchise, Bicentennial Man (1999) and one of my favourite vampire films, Daybreakers (2009). For his final scenes in Event Horizon, Neill had to get to the studio by 3am in order to spend seven or eight hours in the makeup chair. Neill is a New Zealand actor playing an Australian (named after Aussie director Peter Weir) and wears a modified Australian flag patch with the Union Jack replaced by the Aboriginal flag. 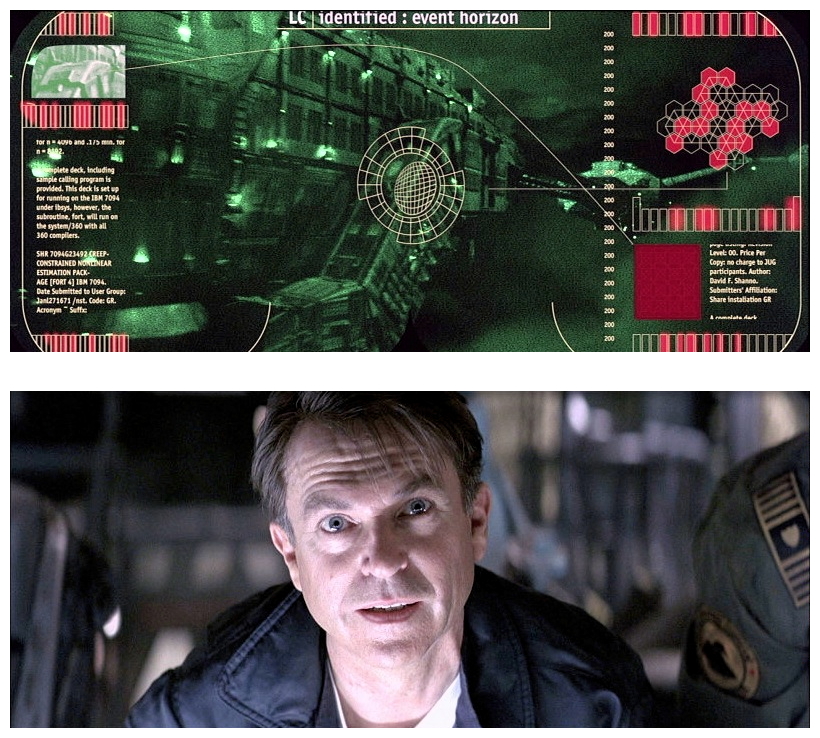 The rest of the crew wore patches to reflect their actual nationality. American actors wear a US flag with 55 stars, and British actors wear a Euro flag with 22 stars (little did they know that Britain would vote themselves out of the European Union in 2017). Laurence Fishburne started his career as young Tyrone Miller aka Mister Clean in Apocalypse Now (1979), but is more famous today for playing Morpheus in The Matrix (1999) franchise. Jason Isaacs is famous for playing sinister Lucius Malfoy in the Harry Potter franchise, but could also be spotted in Dragonheart (1996), Armageddon (1998) and Soldier (1998). Sean Pertwee, son of Doctor Who #3 Jon Pertwee, also appeared in Soldier and one my favourite werewolf films, Dog Soldiers (2002), but is better known today for playing butler/surrogate father Alfred Pennyworth in Gotham. Kathleen Quinlan can also be seen in Airport ’77 (1977), Twilight Zone The Movie (1983), Apollo 13 (1995) and the surprisingly above-average remake of The Hills Have Eyes (2006).

Brimming with dodgy dialogue, over-earnest performances and that old sci-fi standby Death-By-Decompression, Event Horizon is as guilty, giddy and gory a bit of outer-space schlock as one could hope from a major studio. Speaking of which, the Paramount DVD release I viewed was sadly bereft of any special features, but the widescreen treatment is a delight, with the film’s tightly edited effects montages providing more than enough gruesome surprises for freeze-frame fanatics, while the hellish sound design is pure subwoofer heaven for surround buffs. Although Event Horizon received negative reviews and disappointing box-office on its initial release, it has gained a considerable cult following over the years. The movie’s cult status was predicted by Kurt Russell, who starred in Anderson’s next film Soldier (1998). Reflecting on the eventual cult status of his own film The Thing (1982), Russell said, “Forget about what this movie’s doing now. In fifteen years time, this is going to be the movie you’ll be glad you made!” 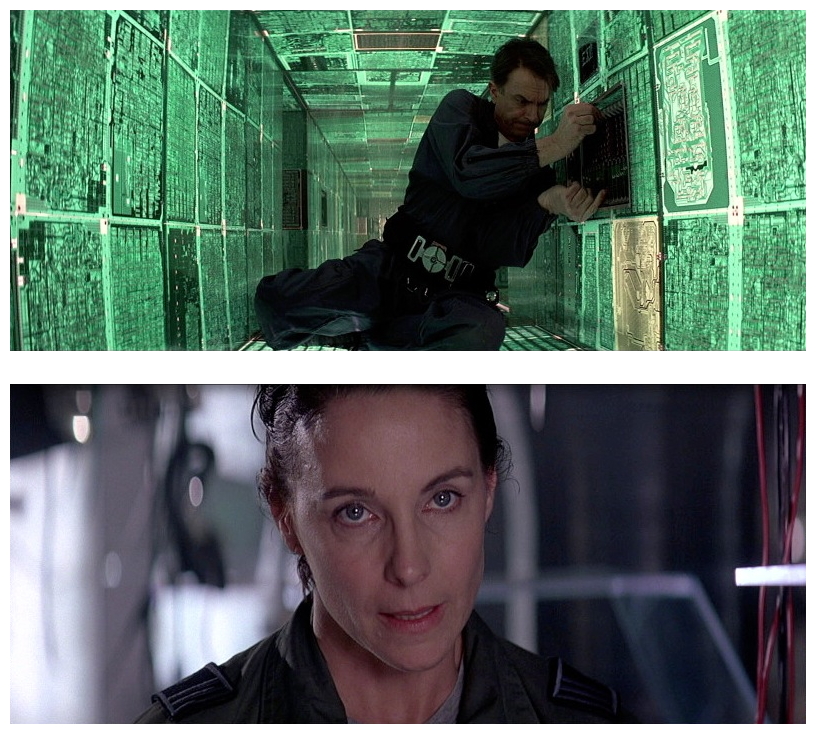 A year after the film’s release, Paramount chief John Goldwyn asked Anderson to assemble the longer version he always wanted to make. For many months Anderson worked on a director’s cut, travelling the world looking for the original footage, some of which was found in strange places (a Transylvanian salt mine, for instance). Unfortunately, because the movie was made before the digital era had kicked in, most of the original footage was destroyed or lost, and the footage that had been found was ruined beyond repair. A few of the surviving scenes (including a scene in which Weir is informed of the re-appearance of the Event Horizon) appear on the Special Collector’s Edition DVD, and survived only in videotape form, sometimes without sound. It also includes storyboards of an abandoned space-walk sequence, and one of three alternate endings. Although Anderson has shelved plans for the director’s cut, he believes there might be a slim possibility that the missing footage will turn up one day. Originally running 130 minutes, Event Horizon was cut down to 95 minutes, but nevertheless feels complete. What’s missing? Quite a bit really:

* More scenes explaining what the gateway actually is.
* Miller finds a ripped-out tooth floating around in the ship.
* Back story concerning a previous romance between Starck and Miller.
* Weir hallucinates Justin turning into his wife Claire (Holley Chant).
* Weir meets the people in charge of the mission where they talk about the reappearance of the Event Horizon.
* The scene where Miller finds D.J. cut open and hanging was longer and much gorier.
* Extended scenes in which Peters hallucinates her son with his legs mangled and covered in maggots.
* Weir’s flashback to his wife Claire committing suicide was much longer with a lot more blood.
* The relationship between Cooper and Justin is revealed, including a better explanation for why Justin goes into the black hole.
* The possessed Weir delivers a fire-and-brimstone speech telling Miller that Hell is actually a dimension of pure chaos, including more shots of the crew being tortured.
* The cryo-chamber filling with blood originally had Weir’s hand pounding against the glass, smashing the chamber to let the blood out then, in an intentional reference to a scene in The Exorcist (1973), a mutilated and naked Weir is seen climbing upside-down on a ladder. 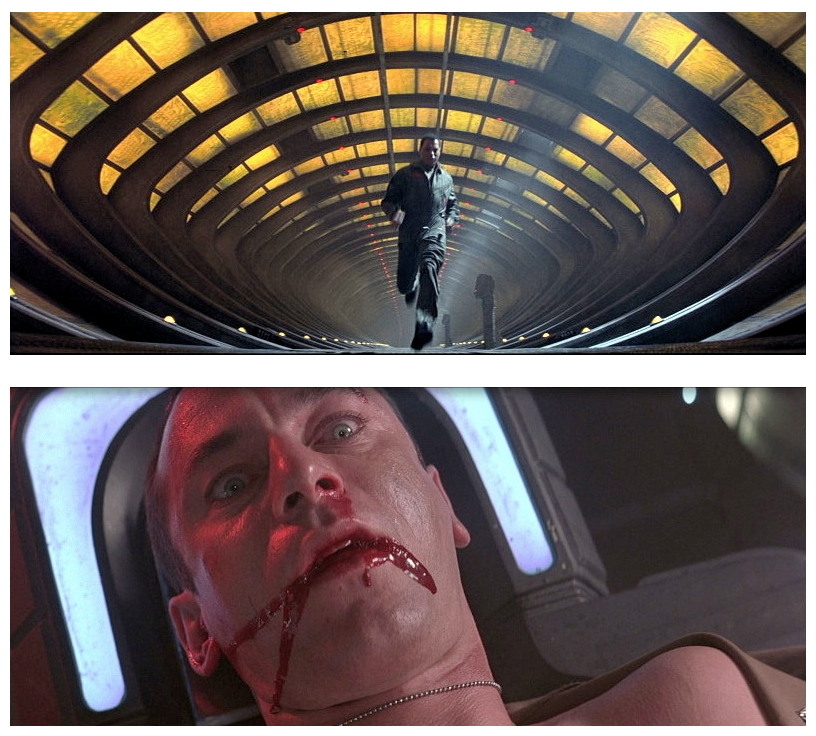 The ‘bloody orgy’ video was much longer – the scenes in which one of the crew pokes someone’s eyes out, and a female crew member sodomises a male crew member with a metal pipe, were even more violent – extra shots of the crew naked and covered in blood having violent sex, raping and eating each other – a more graphic version of the man pulling his intestines out of his mouth – one man is stabbed in back of the head and part of his jaw drops out – another man crawls on the floor while others hit his legs with metal bars, bits of limbs trailing behind – one woman has screws drilled into her teeth – another woman has her arm broken with hunk of metal – yet another woman has her breasts mauled and torn off. Test audiences were disturbed (some actually fainted) because Anderson hired real amputees to add realism when the crew have their bodies damaged in different ways, and porn stars were hired to make the rape scenes more graphic. I’ll allow you to ponder the trials and tribulations involved in making a truly terrifying horror movie for a major Hollywood studio, and ask you to please join me next week when I have the opportunity to sterilise you with fear during another blood-filled excursion to the dark side of Hollywood for…Horror News! Toodles!