The Hobbit: The Desolation of Smaug,  as adapted by Peter Jackson, blazes through the screens this holiday season with its collection of hobbits, dwarves, wizards and elves facing down the fire breathing dragon, Smaug.

Co-hosts Doc Rotten, Dave Dreher, Santos (The Black Saint) Ellin Jr., Thomas Mariani and Vixen, the Voice of Reason, recap and review The Hobbit: The Desolation of Smaug, even if Santos slept through the best part. What? Dave brings the Horror News of the Week with gruesome goodies on The Following, Stephen King and The ABCs of Death 2.

00:03:40 – Review of The Hobbit: The Desolation of Smaug
What is up with that ending? The Hobbit: The Desolation of Smaug frustrates the entire grue-crew with is abrupt, cliff-hanger ending making for an entertainingly confrontation conversation with Doc praising the film for its technological achievements while Santos shares how he struggled to remain awake throughout the film. Outside of the dragon Smaug himself and Bilbo Baggins, consensus has the story rambling on too far long with too many B, C and D story lines.

01:04:44 – Horror News of the Week for 12/16/2013
Dave jumps into the mix to bring the Horror News of the Week. He begins with news about the viral promotional materials for the upcoming second season of The Following starring Kevin Bacon. It seems Stephen King has another book coming out on the heels of Doctor Sleep, titled Mr. Mercedes. There’s also another TV show in the works: Grand Central. There’s a new online VOD service called Horror Inc. that Dave recommends checking out. The trailer for John Schneider’s all star horror slasher film Smothered is now available. The 26th episode of The ABCs of Death 2 has been chosen, giving director Robert Boocheck the coveted spot in the film with M is for Masticate. 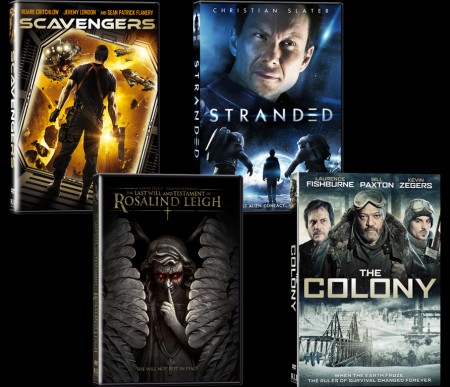 01:25:19– RLJ Entertainment Holiday Horror Giveaway Pack
It’s the holiday season and here is your chance to walk away with four horror films from RLJ Entertainment, some of their best genre films from 2013: The Colony, The Last Will and Testament of Rosalind Leigh, Scavengers and Stranded. Entering is simple, you have two ways to get you’re name in the pot. One way is to go to the Horror News Radio Facebook Group and complete the online Poll, “What is your favorite modern horror franchise.” Another way, if you are not the socialite, is to send an email directly to Doc at docrotten @ horrornewsradio [dot] com with RLJ Entertainment Gift Pack in the subject line and the answer to the above poll question in the body along with your name and address.