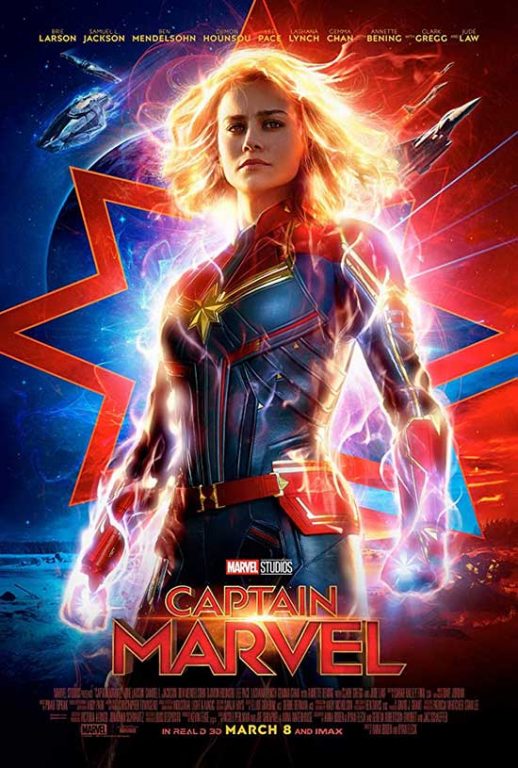 Carol Danvers is a member of the United States military who winds up being caught up in the explosion of a device made by the Kree (the alien race introduced to the Marvel Cinematic Universe with Ronan The Accuser in Guardians of the Galaxy). The accident winds up altering Danvers’ DNA, giving her superpowers — including the ability to fly and remarkable strength and speed.

Controversy.  When I think of Captain Marvel (2019) I don’t think about the movie, I think about controversy (and the 3 full pegs of Marvel Legends Captain Marvel figures peg warming at my local Walmart).  From the “updates” at the Rotten Tomatoes website, to Russian bots, online trolls, protests of feminist agenda, Brie Larson acceptance speeches, and charities whose only cause is to send underprivileged girls to the movies, I think about controversy.  But was the movie any good?  I aimed to put all the controversy aside and decide for myself, so I watched it.  Twice.  (Spoilers to come). 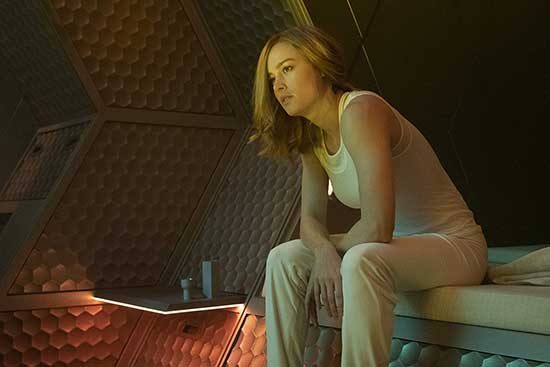 The movie stars Brie Larson (whose name will make me think “cheese theft” for the rest of my life), a great supporting cast, and helmed by the directing duo of Anna Boden and Ryan Fleck, both of whom also co-wrote (along with others).  Boden and Fleck are responsible for Half Nelson (2006) and Sugar (2008), both good movies with some emotion, which unfortunately didn’t fully translate into this movie.

The movie opens with a dream sequence, one that Larson (Vers, pronounced “Veers”) doesn’t fully understand.  Vers has amnesia so she doesn’t remember anything before 6 years ago.  She is currently the sarcastic member of the Kree Starforce tasked with repelling the evil shape-shifting Skrulls from advancing and invading the Kree’s outer planet settlements.  She is unique within the group because she can shoot photon blasts from her hands. 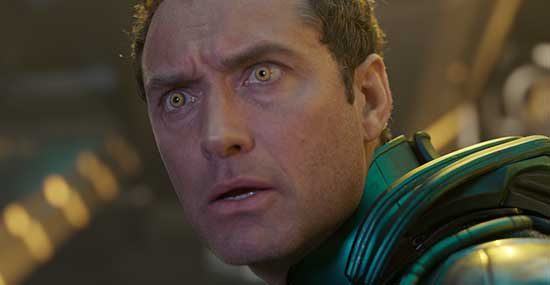 The film immediately addresses a female stereotype, as Vers is repeatedly told by the leader of Starforce, Yon-Rogg, played excellently by Jude Law, that her emotions are a weakness.  This is a theme throughout the film which unfortunately falls flat, but only because we are just told of her emotional outbreaks instead of being shown them.  Telling the audience is one thing, but we need to see her struggling with this so we can grow with her as she does throughout the film. 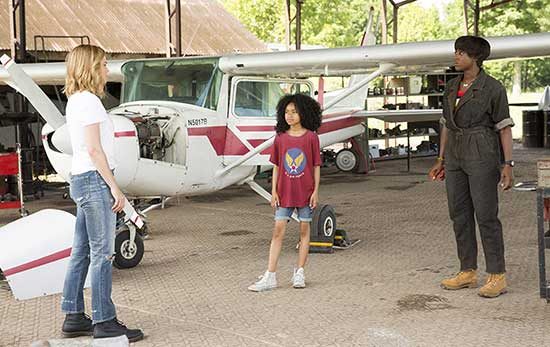 Starforce responds to a distress call from a Kree spy whose cover has been blown on an outer planet in the Kree empire.  This turns out to be a Skrull ambush led by Talos (which is pronounced both “Tay-los” and “Tal-los” in the film) where Vers is kidnapped so the Skrulls can read her mind (apparently, they shape-shift AND read minds…how are they losing this war?).  Talos is played brilliantly by Ben Mendelsohn (Director Krennic in Rogue One: A Star Wars Story), who really steals the show.  He’s amazingly captivating ever through the prosthetics, and his performance really saves this movie. 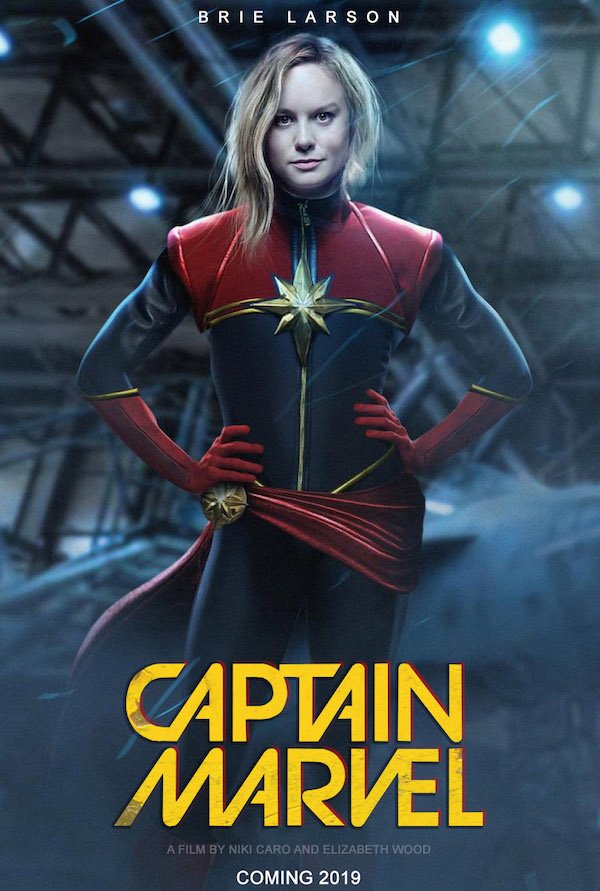 Vers wakes up from unconsciousness after we see VERY brief clips of her memories, from her father when she was a child to being an Air Force pilot, where she is constantly impeded by the men throughout her life from doing what she wants to do as she struggles in a man’s world.  Talos is going through her memories to find the location of Dr. Wendy Lawson (Annette Bening), a forgotten person of Vers’s past, in order to attain her work on a light speed engine and the tesseract that powers it.

After escaping, Vers is dropped onto planet C-53, or Earth circa 1995 (this is prequel to the other movies in the MU), directly into a Blockbuster Video and immediately blows Arnold Schwarzenegger’s head off of a True Lies cardboard movie display with a photon blast.  That’s right, the film uses the overused nostalgia trope, this time the 90’s, for the setting and for the girl power soundtrack with some hits and misses.

Vers steals some communication equipment from a Radio Shack and after she informs Yon-Rogg of her location and of the Skrulls’ plan, he tells Vers that the Skrulls want to weaponize the engine to turn the tides in the war and immediately heads in that direction with the rest of Starforce. 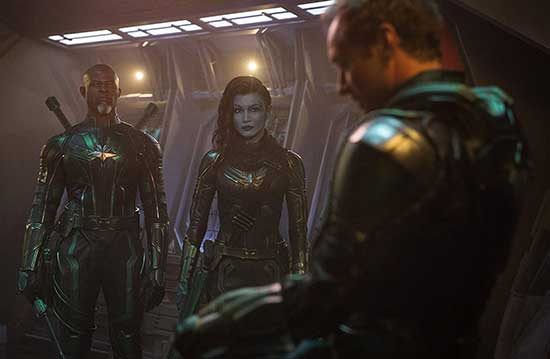 She almost immediately comes across Agent Nick Fury and Coulson of SHIELD, both of whom have been digitally de-aged 25 years.  Samuel L Jackson definitely looks 25 years younger…except when he fights, or runs, or even walks.  I mean, he is 70 years old.  But Clark Gregg’s de-aging, not so good.

So, Fury and Vers team up for the rest of the movie as they try to find Dr. Lawson and stop the Skrulls, but ultimately find out that the Skrulls are just “refugees” looking for a home while being oppressed by the murderous Kree who won’t allow them to settle on any Kree controlled planets.  Here’s your Hollywood injected liberal message addressing the main political issue affecting the U.S. at the time.

If that’s not enough, they also find out that Vers is really Carol Danvers, a human and former U.S. Air Force pilot kidnapped by the Yon-Bogg and the Kree 6 years ago in order to weaponize her ability to shoot photon blasts from her fists.

This brings us to one of the issues with the movie, Jackson and Larson’s chemistry on screen seemed mostly forced.  There are only a few scenes where it really worked.  I actually might even argue that Jackson and the Flerken (the cat, Goose) had more chemistry on screen than Jackson and Larson, a major reason being that Larson’s acting was bland for the most part, along with the majority of this movie.  Her delivery of one-liners often fails, and her sarcasm doesn’t really hit until the third act after she fully grasps her powers.  Everyone else does a stellar job and they carry the film, it’s only Larson who drops the ball for most of her performance.

The last 30 minutes is Carol becoming more powerful by embracing herself and her emotions and breaking free of Kree control, which makes her powers stronger allowing her to defeat Starforce and more of the Kree. This battle sequence is actually very entertaining, and thank god for that, because the previous hour and 20 minutes dragged for the most part, other than some superb acting by Mendelsohn.

What else is wrong with this movie?  It’s WAY TOO LONG.  And other than the first 10 minutes and the last 30 minutes, it’s a little bit bland and boring.

Another thing.  Her memory loss took away from what this film could’ve been.  It prevented the audience from growing emotionally with the character as the movie went on.  Maybe if we saw the full scenes of Vers being held back throughout her life by men instead of 2 second clips of those scenes we could’ve felt the acumination of growth at the end.  Unfortunately, you can’t make up and entire movie of characterization in the final 5-minute scene where the main characters talk at the dinner table…and then wash dishes.  I’m not kidding.

I think it did succeed in being an inspiring movie for women however, as a female lead in a superhero movie has been way overdue, but it would have been that much more effective if, again, we saw the scenes mentioned above.

So, was it good?  It was about average with a couple good action sequences.  I wouldn’t watch it a third time, but I think there’s enough here to at least give the sequel a chance.