The Doctor Who Project: The Day of the Doctor

THE DAY OF THE DOCTOR with MOONDOG MACKEY

Ever since the 50th anniversary trailer was first shown at the San Diego Comic Con this past year, rampant speculation arose on what to expect from this episode and further more, could this episode with a half of century of history behind it actually live up to expectations, hype and marketing this episode would generate?

Executive producer for the show and writer for The Day of the Doctor, Steve Moffat was quoted as saying this episode was a love letter to the fans. No more appropriate words were ever made about an episode and YES without question this one episode was more than able to live up to the absolutely enormous hype surrounding it. 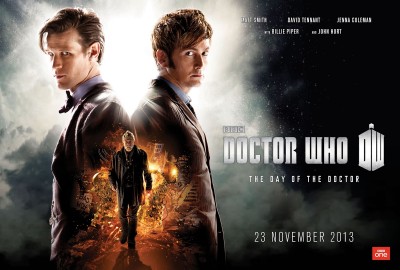 I have been a life long Doctor Who fan since my childhood when PBS would show reruns of the show on Saturday evenings mostly featuring the 4th Doctor, Tom Baker. Doctor Who was as much a part of my childhood as Star Wars, Godzilla, and Speed Racer. My fandom has continued on into my adulthood with an impressive looking Weeping Angels tattoo inked onto my left arm.

When the show returned with the 9th Doctor in the new millennium the episodes ran a few months behind on the Sci-Fi Network before the brainless twits at that station decided to be so cool and change their name to Sy Fy and feature programs that had nothing to do with Science Fiction. But back on the task at hand, I was once again taken back to my childhood with the adventures of the 9th Doctor which continued on to the 10th and now 11th Doctors.

The stories with fantastic (nod to the 9th Doctor) the action was brilliant (nod to the 10th Doctor) as I dove in with both feet and screamed Geronimo (nod to the 11th Doctor) and followed him on his adventures as one of his couch ridden companions, eagerly anticipating what came next! And when the episode The Name of the Doctor came to it’s conclusion and revealed why Clara was the Doctor’s impossible girl I was in shock to see the always awesome and terrifically talented John Hurt show up as an incarnation of the Doctor’s past that he never admitted too! For months I wondered how this would change the dynamic of the show!

Was the 11th Doctor really the 12th Doctor? Where does John Hurt’s Doctor fit into the equation? Why does the Doctor have an issue with that incarnation? And was that the Time War in the background? So many questions and month and months of speculation and anticipation towards the 50th Anniversay episode – The Day of the Doctor…….

The Day of the Doctor was as Steven Moffet nicely put it, a love letter to the fans. So much pressure on Steven to deliver on this episode and he delivered and then some! From the opening theme that came from the very first episode of the 1st Doctor with the police offer walking past the Foreman sign to the school that Clara was now teaching at, all shout outs to the 1st Doctor, the Doctor that started the franchise, to Clara riding her bike right into the TARDIS and the 11th Doctor telling her he felt a breeze so she snaps her fingers to close the doors the show coming full circle from the 1st to the 11th Doctors and we still had a story to tell in-between.

The return of UNIT and Matt Smith telling the assistant NICE SCARF I felt like it was Easter morning and I was looking for the Easter eggs but now I was looking for all the little nods to the previous Doctors before him. The return of the Zygons was a nice touch as those creatures were only featured once back in the 70s and the incredible special effects of the Time War which was finally shown on-screen this episode had everything a fan boy could want. And then the coup de grace of the entire episode was the back and forth between the 10th and 11th Doctors – the line about Matt Smith’s sonic screwdriver being bigger was priceless – and then both of their interactions with the War Doctor played magnificently by John Hurt. And let us not forget Mr. Hurt’s interaction with the Bad Wolf version of Rose Tyler, what a delicious treat to watch! I found myself applauding this episode more and more and then Steven Moffet delivered to me the best present he could possibly give to a Whovian that began watching this amazing show when I was a kid, Tom Baker showing up at the end as the Curator with more than a slight nod to the fact he was an older version of the 4th Doctor, having a conversation with Matt Smith’s version of the Doctor. BRILLIANT! FANTASTIC! Use whatever adjective you want but that one moment, that one scene, brought me back to my childhood like no other television show or movie has ever been able to do.

The Day of the Doctor was more than just an episode. It was a celebration. 50 years of the time traveling Time Lord from Gallifrey and l for one am hoping for another 50 years of this mad man that stole a blue box and travels thru time and space.

TARDIS TIDBITS: Do yourself a favor and go onto You Tube and watch the mini-episode called the Night of the Doctor which shows the end of the 8th Doctor and his regeneration into the War Doctor. Very well written and acted episode which left me wanting to have seen more of the 8th Doctor in action. It was also a nice touch by Steve Moffet and Paul McGann to show us that missing regeneration, something that Chris Eccelston was unable to do for us in the 50th anniversary episode. We see the War Doctor start to regenerate and I was hoping against all hope that Chris and Steve had worked something out but alas, the camera cut back to David Tennant and Matt Smith so that was my only minor disappointment with the 50th.

And now we wait for the Christmas special which will be Matt Smith’s final episode before he regenerates into the 12th Doctor, and by the way Peter Capaldi is an outstanding choice for the role! Watch him in the episode the Fires of Pompeii which is a unique episode that also has Karen Gilliam in it before her days as Amy Pond. Also speaking of the 50th if you get a chance, download and watch the episode of the Graham Norton Show which ran the night before the 50th premiered with featured guests Matt Smith, David Tennant, and also featured singer Robbie Williams who was funny as all hell on the couch and did a unique version of the Jungle Book song that I actually enjoyed to end the show. But the line of the night was Graham telling David his hair was so stupid! 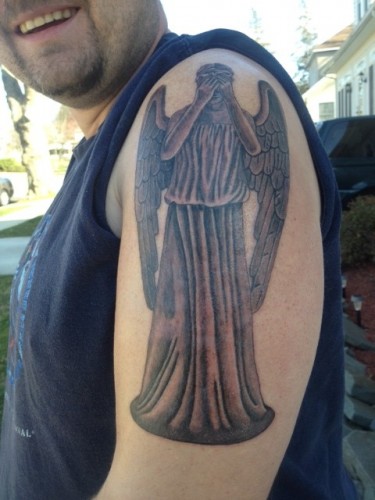 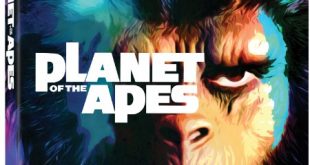