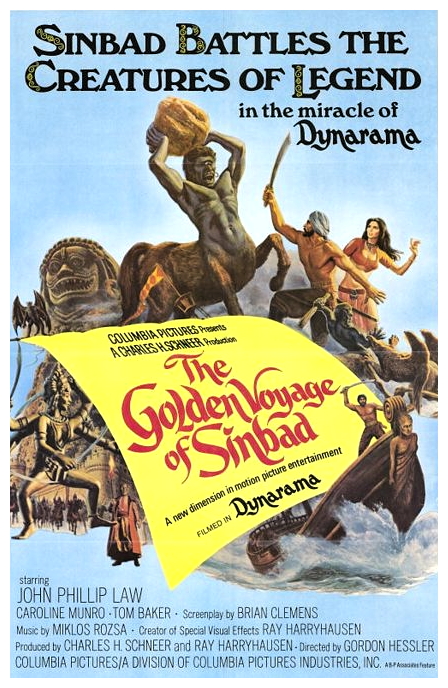 “Sinbad and his crew intercept a homunculus carrying a golden tablet. Koura, the creator of the homunculus and practitioner of evil magic, wants the tablet back and pursues Sinbad. Meanwhile Sinbad meets the Vizier who has another part of the interlocking golden map, and they mount a quest across the seas to solve the riddle of the map, accompanied by a slave girl with a mysterious tattoo of an eye on her palm. They encounter strange beasts, tempests and the dark interference of Koura along the way.” (courtesy IMDB)

One way of making our ordinary world seem fantastic is to create an entirely fantastic world from the ground up. Until the eighties, when the popularity of so-called sword-and-sorcery novels became so great that filmmakers could no longer afford to ignore it, there were very few producers who were prepared to take on the Herculean task of building an entirely ‘other’ world of magic, with all the problem of sets and special effects that the work would entail. Existing myths were the obvious source of such movies, though later on, as filmmakers began to put greater trust in the audience’s capacity to lose themselves in a story, it became quite common to invent new fantastic worlds altogether, usually set in some unspecified archaic past, or in some unspecified alternate universe – Star Wars IV A New Hope (1977) did both. Before then, it was Ray Harryhausen who persevered with the business of building fantasy worlds while others steered clear. 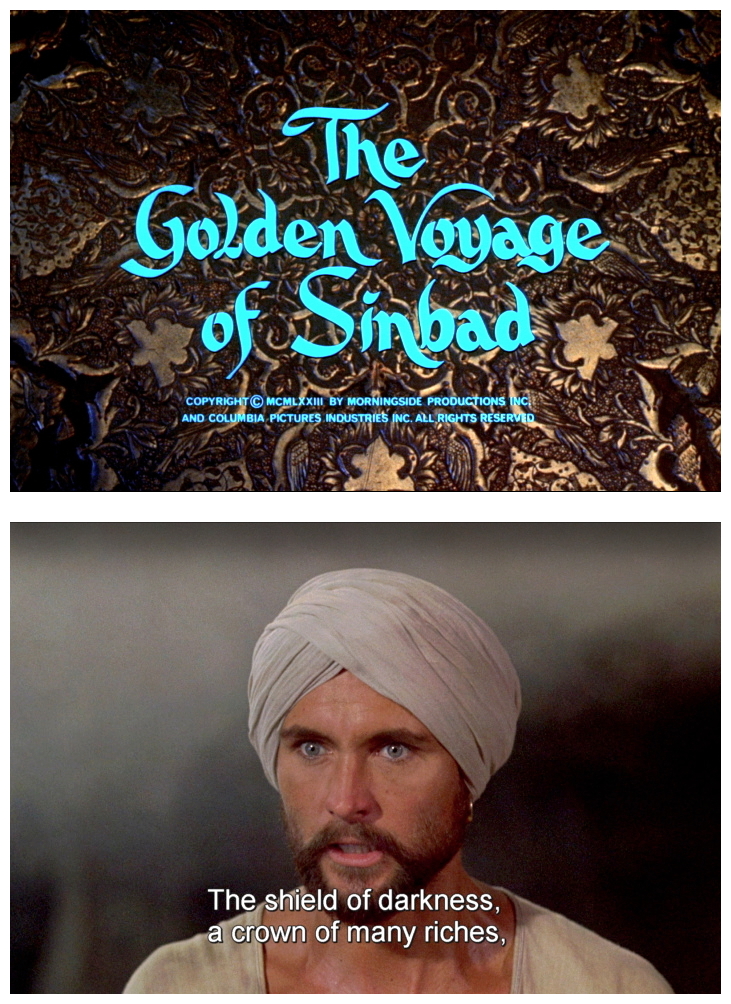 Even if one has reservations about the quality of the end product, one has to admire the way Harryhausen, despite major obstacles, has always stuck to his ‘fantasy’ guns. With co-producer Charles Schneer he made three magic-and-monsters movies within eight years, doing the special effects himself of course, the first of which was The Golden Voyage Of Sinbad (1973). Harryhausen’s persistence was rewarded. After a series of semi-flops like One Million Years BC (1966) and The Valley Of Gwangi (1969), The Golden Voyage Of Sinbad turned out to be his most successful film at the box-office yet – it even did better than The 7th Voyage Of Sinbad (1958). Though not as enjoyable as that classic, it is nevertheless very entertaining. Filmed in Spain, the story recounts an epic quest for the third part of an amulet of which the first part is held by Sinbad (John Phillip Law) and the second by the Grand Vizier (Douglas Wilmer) whose face, destroyed by an evil magician named Koura (Tom Baker), is hidden behind a forbidding golden mask. 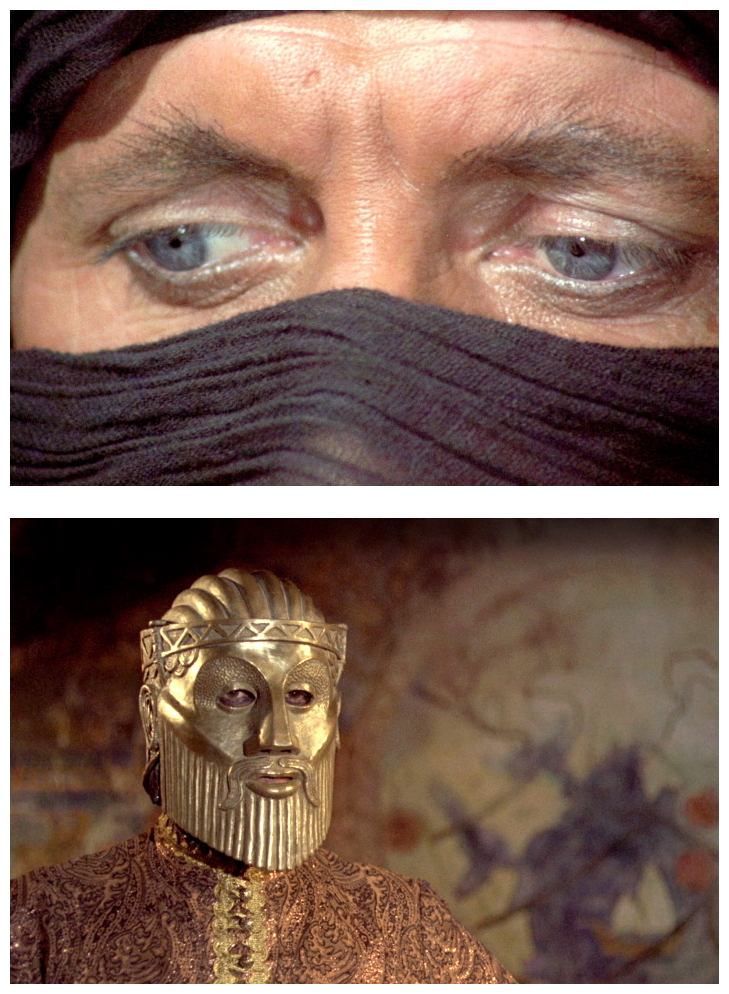 He hopes to have his face restored by the legendary fountain of youth and, accompanied by the beautiful slave girl Margiana (Caroline Munro), their quest takes them on a long journey to Lemuria. Koura follows the travellers, hoping to find the fountain first so he can regain his youth and obtain absolute power from the mystical waters. The pacing is a little slow, but it features five fantastic Harryhausen creations: a six-armed sword-wielding statue of Kali; a wooden figurehead on Sinbad’s ship which is given life; a tiny winged Homunculus that serves as Koura’s spy; and a climactic battle between a centaur and a griffin. Although the film’s title suggests a mythology from the Arabian Nights, this hodgepodge takes elements from Hindu (the six-armed goddess Kali) and Greek (centaurs and griffins) mythologies. There is a real sense of wonder here although, in some sequences, the fantasy becomes rather mechanical, particularly the battle between the centaur and the griffin. 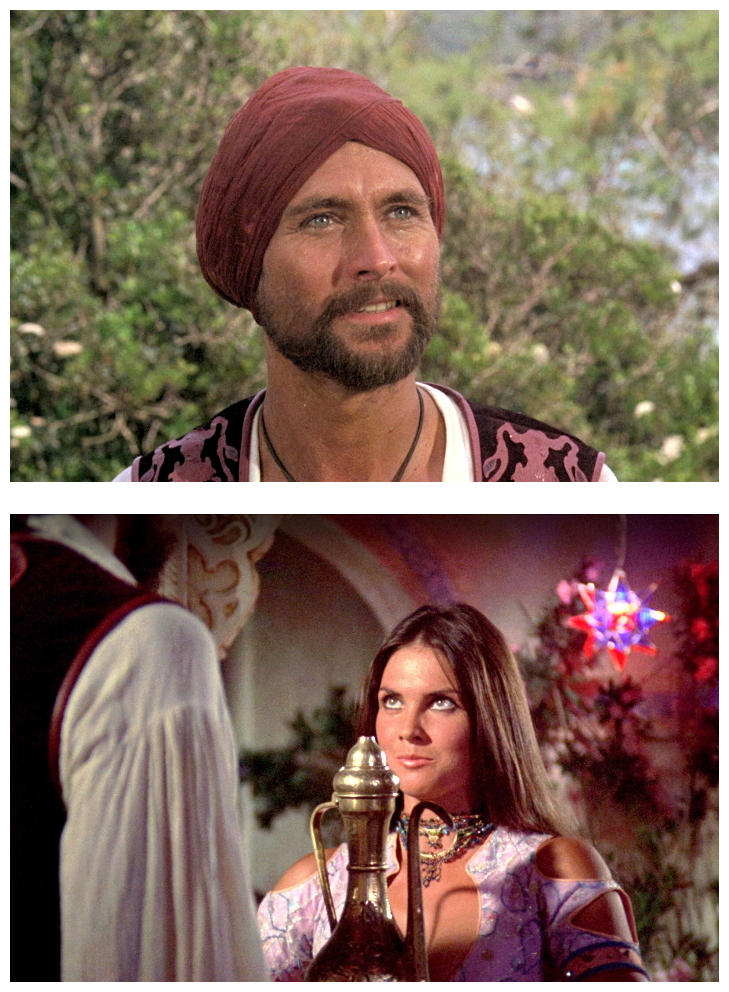 What makes this movie memorable for so many filmgoers is the talent employed before the camera, as well as behind. With a screenplay by prolific British writer Brian Clemens and a rousing score by Miklós Rózsa, The Golden Voyage Of Sinbad succeeds in projecting an atmosphere of the uncanny more successfully than most of Harryhausen’s other work, before or since. Rózsa was one of Harryhausen’s first choices (along with Max Steiner) to score The 7th Voyage Of Sinbad (1958) but Schneer persuaded him to agree to Bernard Herrmann instead. While Herrmann ended up scoring four of their movies, he wasn’t available for The Golden Voyage Of Sinbad, so Harryhausen finally got his wish to have Rózsa score a Sinbad movie. Director Gordon Hessler got his start substituting on The Oblong Box (1969), replacing wunderkind Michael Reeves after he had killed himself with an accidental overdose of sleeping pills and alcohol. 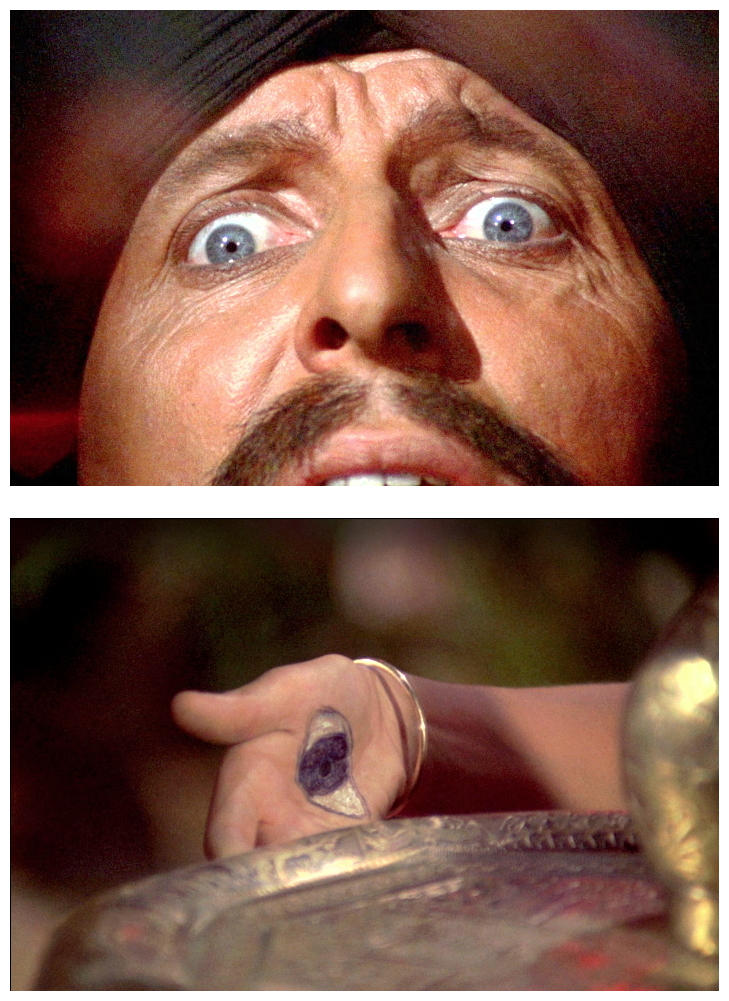 It was the first of three horror films Hessler would direct with veteran Vincent Price, the other two being Cry Of The Banshee (1970) and Scream And Scream Again (1970). Other films directed by Hessler include Murders In The Rue Morgue (1971), KISS Meets The Phantom Of The Park (1978), Pray For Death (1985) and The Girl In A Swing (1988). This time around Sinbad is played by John Phillip Law, whose credits include Barbarella (1968), Danger Diabolik (1968), The Love Machine (1971) and starring alongside Mel Gibson in one of the worst Australian films ever made, Attack Force Z (1982). Tom Baker, who plays the wicked magician Koura, got his big break when Laurence Olivier recommended him for the role of Rasputin the mad monk in Nicholas And Alexandra (1971). In 1974 Baker became the fourth actor to play the Doctor in the long-running BBC TV series Doctor Who – BBC producer Barry Letts was convinced he was right for the part after seeing his performance in The Golden Voyage Of Sinbad. 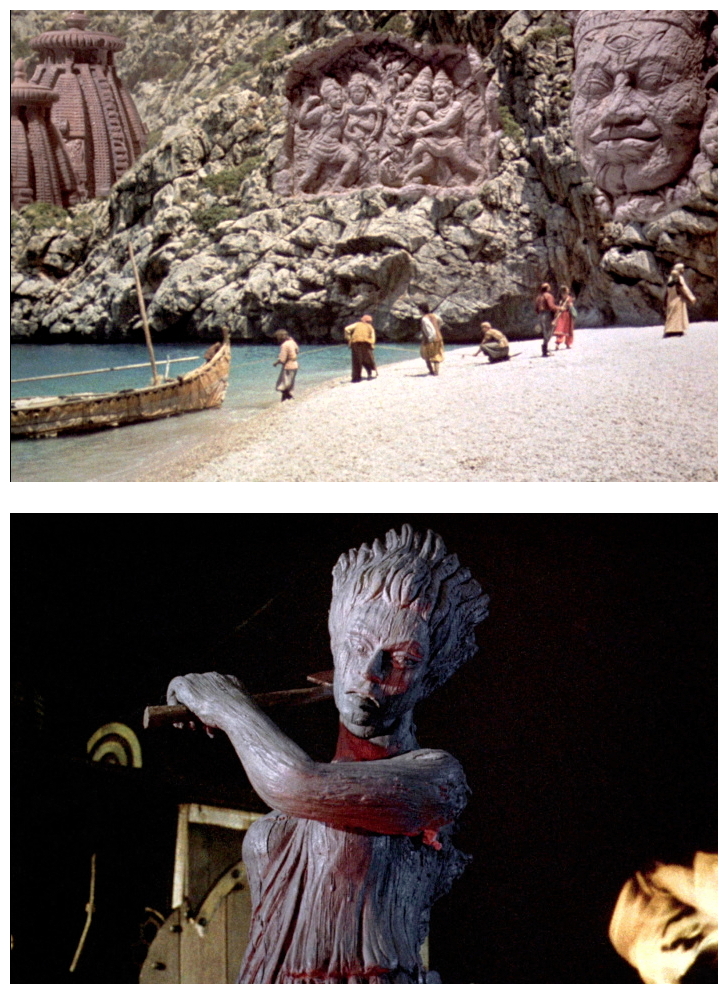 Writer Clemens insisted Caroline Munro, one of Britain’s leading scream queens, be cast as the slave girl Margiana: “I had been signed by Hammer for one year for a contract, out of which I did two films, one being Dracula AD 1972 (1972), and the second one being Captain Kronos Vampire Hunter (1974) which, kind of, would come full-circle, to Sinbad. It was written and directed by Brian Clemens, who wrote the screenplay for The Golden Voyage Of Sinbad, so I was lucky enough to be chosen for Captain Kronos, and they were searching for somebody to do Sinbad, and they wanted a big name, somebody American or well-known, but Brian said no. He kept lobbying Charles Schneer and Ray Harryhausen saying, ‘I think you should come and look at the rushes and see what you think, because I think she’s right’.” When the Grand Vizier is seen without his mask at the end of the film, you may recognise actor Douglas Wilmer as television’s Sherlock Holmes during the sixties and about a million other appearances on the box, in shows like Robin Hood, The Saint, The Avengers, The Baron, UFO, Space: 1999 and, more recently, in the Benedict Cumberbatch series of Sherlock. 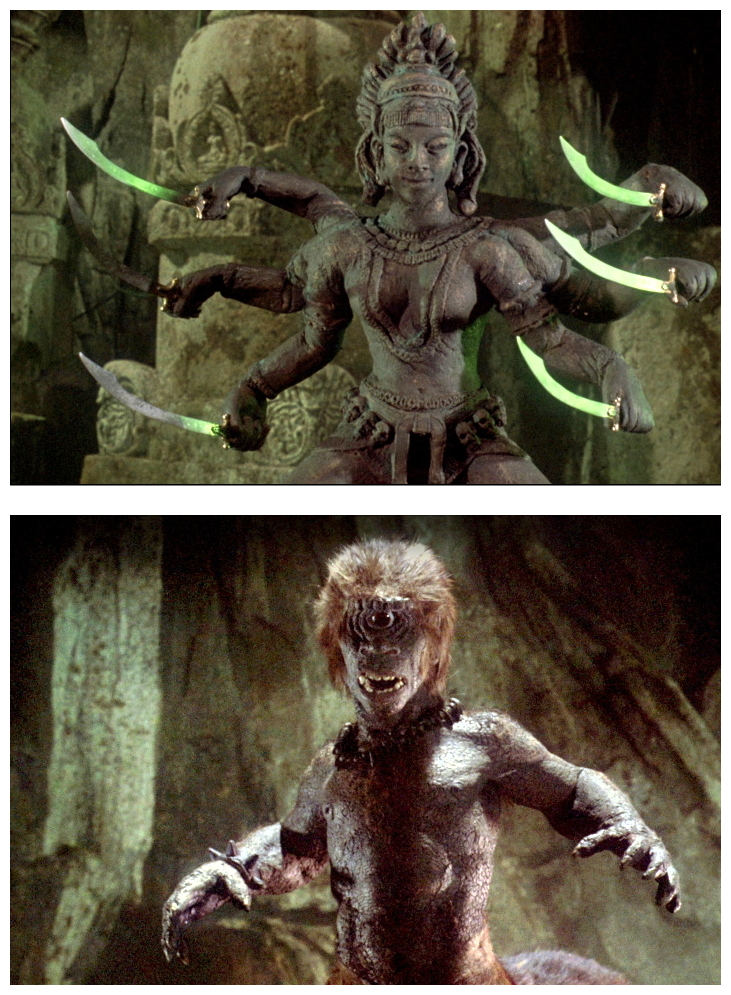 Despite an extensive acting career that stretches over forty years in every medium imaginable, Martin Shaw is probably best remembered as one half of The Professionals with co-star Lewis Collins, an action-packed television series created by, coincidentally, writer Brian Clemens. Last but not least is Robert Shaw, best remembered for his performances as the old fisherman Quint in Jaws (1975) or as the conned gangster at the centre of The Sting (1973). Shaw desperately wanted the role of Sinbad but had to settle for the Oracle Of All Knowledge, hidden under a ton of makeup with his voice electronically altered. Shaw’s catalogue includes From Russia With Love (1963), Battle Of The Bulge (1965), A Man For All Seasons (1966), Battle Of Britain (1969), The Taking Of Pelham 123 (1974), Black Sunday (1977), The Deep (1977) and Force Ten From Navarone (1978). 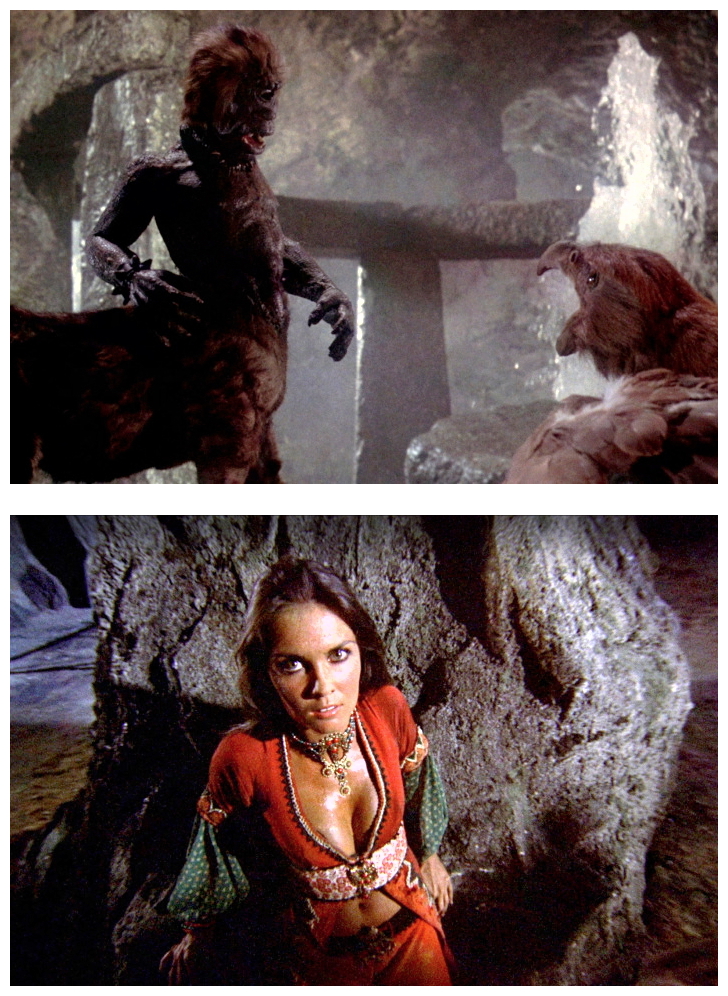 The sequel, Sinbad And The Eye Of The Tiger (1977), was rather disappointing. John Wayne‘s son Patrick Wayne starred as Sinbad, without any of his old man’s charisma. The script is amazingly vapid, and the film has an old-fashioned look about it, and plods along at an unvarying pace, building very little tension. Thus Harryhausen’s effects appear in a frame that does not set them off to advantage, though there is plenty of entertainment in the giant walrus, the giant bee, the minotaur and the horned troglodyte. The most touching effects centre on the young man who is turned into a big baboon, but that’s another story for another time. Right now I’ll ask you to please join me next week when I shall discuss another anti-classic for Horror News. Until then, good night and remember, as my old friend Bela Lugosi would say, “Bevare! Bevare of the big, green dragon that sits on your doorstep – and the gifts it leaves on your lawn.” Toodles! 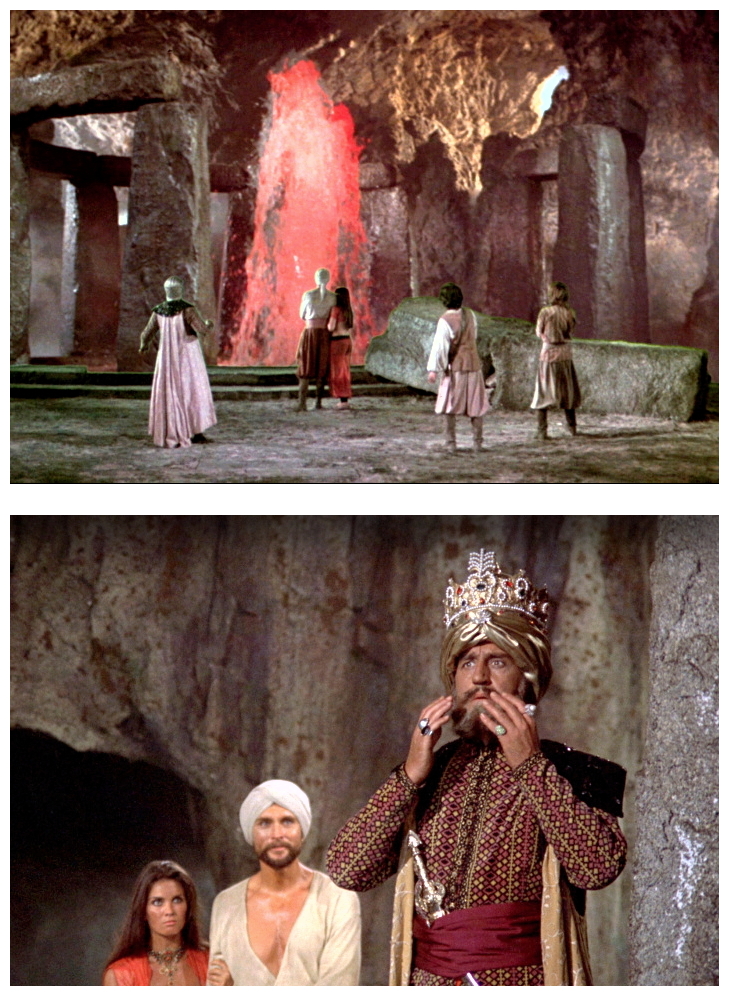