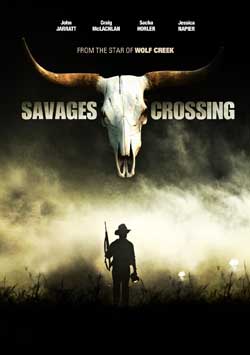 When a sudden flood traps a group of strangers in an outback roadhouse it becomes clear that the threat from within the group is far greater than from raging torrent outside.

Savages Crossing is an Australian cat and mouse thriller written by brother and sister duo, John and Cody Jarrett, and directed by Australian born Kevin James Dobson. The movie takes place in and has all Australian actors, which with their own dialect and phases, can lend a little humor when it’s not warranted when viewed by someone not familiar with their langue. But the real question is can you get sucked into the story, so much so that you don’t realize the accents and funny phases being used.

The main plot of this movie is very simple, a man gets out of jail, Phil (John Jarrett), and wants to murder his wife, Sue (Angela McGregor). The real trouble begins when Sue is tipped off by a mystery man, who is later identified as Chris the cop (Chris Haywood), that Phil is out and looking for her. Sue grabs her son, Damien (Charlie Jarrett), and heads to her sisters’ house. The only problem is a class 2 hurricane is starting to let loose outside. 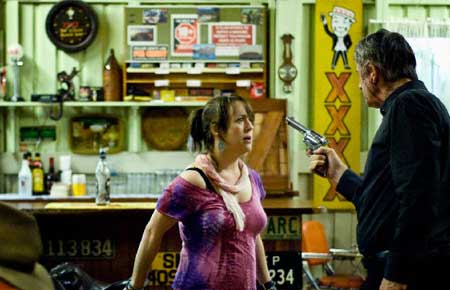 They make it as far as the Wonga River Roadhouse, where they meet owner Kate (Jessica Napier), and two other stranded motorist caught in the storm, Shae (Sacha Horler) and Mickey (Rebecca Smart). When Phil finds out Sue has fled to her sisters, he gives chase. He makes it to a flooded road where he meets Mory (Craig McLachlan). He is told he won’t make it across the road, but tries anyway, getting stuck halfway across. Mory, having a much larger vehicle, has to save Phil, and brings him along with him to his final destination, which so happens to be the Wonga River Roadhouse. Once Phil gets inside and sees that he was delivered right where he wants to be, he becomes ecstatic. Phil, Sue and Damien, all go to a booth in the back, where a couple of outbursts start to take place. Mory goes to try and clam everyone down, when Officer Chris shows up making a big scene, trying to arrest Phil and basically letting everyone know that he’s a cop and in charge.

Now it’s the stage is set up for all the wackiness to start. Chris poorly attempts to kill Phil, Phil escapes into the hurricane and everyone scatters. That’s basically the rest of the movie, Phil tries to kill Sue, Chris tries to kill Phil, and Mory tries to do what he must to keep peace. The whole thing goes into a circle chase of people trying to kill each other, or using the others as bait to try and lure someone out. It does get a little redundant in all the little ways that Phil seems to slip through everyone’s fingers. The ending is a bit of a letdown also, after all the chases and what everybody had been through; it doesn’t have the fulfillment that you were looking for.

One of the biggest let downs of this movie is the inclusion of both the Mickey and Shae’s characters. They have no real bearing on moving the plot forward and only seem to be there to contradict each other’s personalities. Shae seems to have a more guarded personality, making her suspicious of Sue and tries to hear out Phil’s side of the events. Where Mickey seems more compassionate and only believes what Sue tells them. Either way, the two characters have no relation to either Sue or Phil, or the owners of the Roadhouse, Mory and Kate. This makes their characters feel planted and unnecessary.

That’s not to say that there isn’t anything good about this movie, the outdoor shots are fantastic. The way they shot this was great, the storm is pouring down rain, seemingly trapping everyone inside, but when they do go outside the woods seem closed off. The streaming rain, pitch blackness, and wooded area all do a great job to make everything feel boxed in, almost giving you a claustrophobic feeling. The other good thing in this movie is actor John Jarrett. He does a great job as a sleazy underhanded business man who is going to do whatever he has to, to kill his wife and get his money. 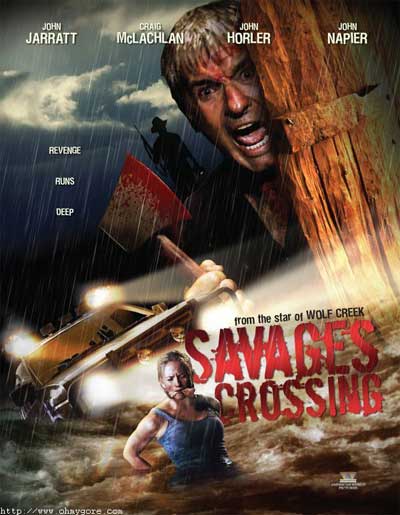 The main fault of this movie is the redundancies in the plot, and not having an attachment to most of the characters, which in the end hurts this movie a lot. I would really have to say that if you are looking for a thriller in this nature you are better off going with Identity or even The Number 23; this is one that you can afford to miss.