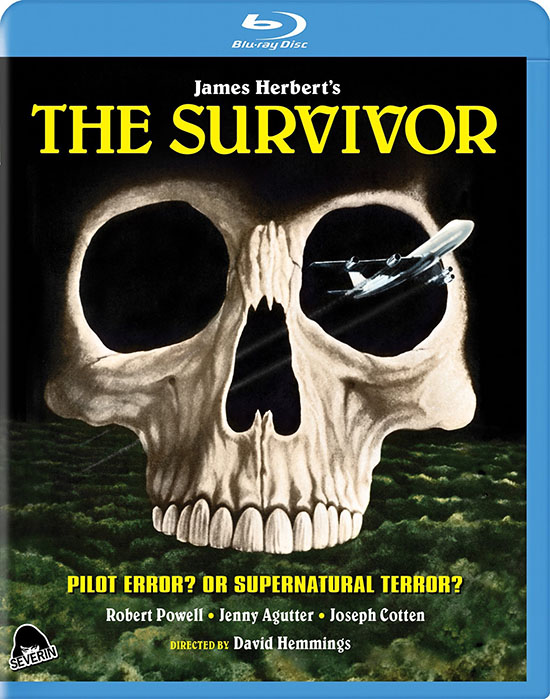 A 747 carrying three hundred passengers crashes killing everyone on board but the pilot. The sole survivor miraculously walks away unharmed, with no memory of what caused the crash. The victim’s ghosts return to haunt the lone survivor while taking vengeance on anyone who desecrates their memory.

1981’s The Survivor was produced during the 70’s and 80’s heyday of Australian genre film making- a boom sparked by generous government incentives and excellent tax advantages for investment in locally produced films. In an effort to compete internationally these “Ozploitation” films imported Hollywood name actors while ladling on generous helpings of sex, violence and car crashes. This fertile era was chronicled in Mark Hartley’s highly recommended 2008 documentary Not Quite Hollywood.

But director David Hemmings’ The Survivor represented a departure from that exploitation trend. Even though he and producer Anthony I. Ginnane had a history producing exploitation films they opted to make something more cerebral, using The Innocents (1961) as a template. Ginnane’s grindhouse resume already included Australia’s first soft-core sex film Fantasm (1976) as well as the gleefully trashy Patrick (1978) while Hemmings had just produced the satanic opus Alison’s Birthday (1981).  Their restrained approach was also a head scratcher because The Survivor is based on a novel by horror icon James Herbert (The Rats, Lair)- an author rarely accused of subtly. The Survivor’s understated sensibility may have given it a veneer of class, but ultimately the film is too subtle for its own good.

The Survivor gets off to a great start, with a skillfully shot and edited airliner crash followed by equally powerful post-disaster scenes. I had the misfortune of attending two aircraft crashes during my time on an Air Force firefighting team and can attest that the crash site scenes vividly capture the chaos and despair.

The only survivor is Keller (Robert Powell) the airplane’s pilot, who emerges from the wreckage unscathed. He returns home plagued by survivor’s remorse and racked with guilt over not being able to recall the crucial moments leading to the disaster. But those are only the beginning of his troubles. 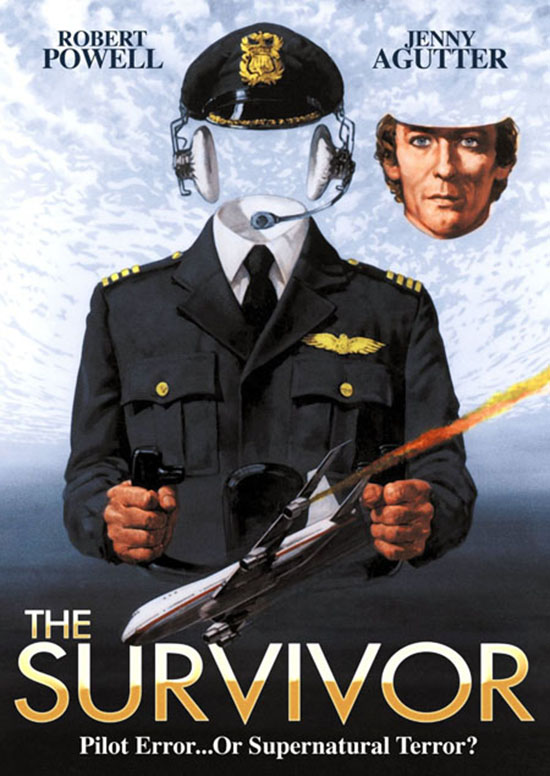 The three hundred crash victims may be dead, but they’re anything but quiet. Spirits of dead children haunt Keller and others who were at the crash site, including a tabloid photographer who ghoulishly exploited their deaths. Keller teams up with Hobbs (Jenny Agutter), a pretty psychic who convinces him that his supernatural visions are not hallucinations, but genuine messages from beyond. Together they probe into the mysteries surrounding the plane crash.

The Survivor has a lot of things going for it, so I’ll focus on those aspects first. The top-notch cinematography and art direction are equal to any Hollywood production, and both were nominated for AACTA awards- the Australian equivalent of an Oscar. Scenes showing the wreckage reassembled in an airplane hangar have a particularly haunting quality. There are also some terrific physical effects, including the climactic explosions that will make you say, “Wow, that actor must be dead!” The cast worked hard with the material they were given. Powell, in particular, is sympathetic and believable as Keller, though his booming voice seems a bit too sonorous for the role. That voice later became his stock and trade as the go-to narrator of World War 2 documentaries. Australian composer Brian May (Mad Max), who by the way was not the guitarist for Queen, delivers another winner in a long career of dynamic musical scores.

There are certainly problems with the film’s direction, which never finds its rhythm or forward thrust. But most of the trouble stems from the script’s discarding many of the supernatural and visceral elements of Herbert’s book, including his demonic solution to the mysterious crash. Another filmmaker like Aussie exploitation impresario Brian Trenchard-Smith (Turkey Shoot) could have gone through Herbert’s source novel with a highlighter and plucked out ninety minutes of delicious nastiness. But screenwriter David Ambrose chose to omit the juicy stuff in favor of creating a more streamlined thriller. It’s a rare misstep from the underrated screenwriter who penned the pioneering faux documentary Alternative 3– a film so compelling that a legion of conspiracy theorists still insist it’s genuine. Director David Hemmings’ attempts to create a tense supernatural thriller are mired down by this pedestrian script, so by the second act the film’s pace borders on glacial.

Sadly, this was Joseph Cotton’s final film, and he looks tired and wan as he walks through his scenes as a priest. Although his character was critical to the novel in the film it feels like a tacked on cameo. This great actor of stage and screen deserved a better final curtain call.

The Survivor was released in 1982 when audiences were lining up for slasher franchises like Friday the 13th and Halloween as well as Grand Guignol romps like An American Werewolf in London. This understated supernatural thriller just couldn’t compete with all those gruesome hits. Hemmings and producer Ginnane must have learned their lesson because they teamed up a year later to co-produce the futuristic prison film Turkey Shoot. This time they tossed aside any artistic pretense, serving up the sex and violence like Foster’s Lager and Rib Eyes at a BBQ.

In summary, The Survivor is an earnest but flawed attempt at the vengeful ghost genre that should have stuck closer to the book. You’ll be intrigued by the first fifteen minutes, only to find your attention drifting thereafter. Your leisure time would be better spent reading a good Herbert novel like The Rats or The Dark or perhaps watching screenwriter David Ambrose’s Alternative 3 online. Author James Herbert confessed to falling asleep during a screening of The Survivor, and later called the film, “rubbish.” He repeated that sentiment a year later upon seeing Deadly Eyes, the adaptation of his novel The Rats. But I suppose finding out that your vicious, flesh-eating rodents are being played by adorable dachshunds in rat costumes will do that.

Actor turned director David Hemmings was an interesting character that horror fans will best remember as the lead in Dario Argento’s Deep Red (1975). He’d initially caught the public eye as the fashion photographer in Antonioni’s classic thriller Blow Up (1966).  That film made him a darling of the counterculture, which he celebrated by having affairs with every beautiful woman in Europe. After being turned down for the role of Alex in A Clockwork Orange, he shifted his sights to producing and directing. After The Survivor, he directed quite a bit of episodic television including shows like Airwolf and The A-Team. He passed away in 2003 at age sixty-four.

Anthony I. Ginnane went on to produce over fifty films, including the cult hits Strange Behavior (1981) and Thirst (1979) as well as action movies like The Siege of Firebase Gloria (1989) written by my old buddy Billy Nagle. He’s still producing films today, including the 2013 remake of his fan favorite Patrick.

British horror novelist James Herbert passed away in 2013, leaving a legacy of twenty-three genre novels. Though the film adaptations of his books have been lackluster, it didn’t stop his books from selling over fifty million copies.

The Survivor is now available on bluray from Severin Films