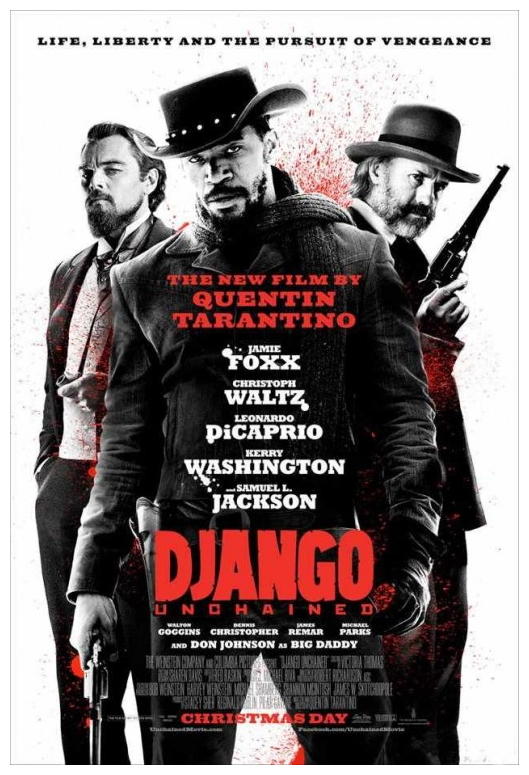 “In 1858 Texas, the former German dentist Doctor King Schultz meets the slave Django in a lonely road while being transported by the slavers Speck Brothers. He asks if Django knows the Brittle Brothers and with the affirmative, he buys Django. Then Schultz states that he is a bounty hunter chasing John, Ellis and Roger Brittle and proposes a deal to Django – if he helps him, he would give him his freedom, a horse and $75.00. Django accepts the deal and Doctor Schultz trains him to be his deputy. They kill the brothers in Daugherty and Django tells that he would use the money to buy the freedom of his wife Broomhilda, a slave who speaks German. Schultz proposes another deal to Django – if he teams-up with him during the winter, he would give one-third of the rewards and help him to rescue Broomhilda. Django accepts his new deal and they become friends. After the winter, Schultz goes to Gatlinburgh and learns that Broomhilda was sold to the ruthless Calvin Candie von Shaft, who lives in the Candyland Farm, in Mississippi. Schultz plots a scheme with Django to lure Calvin and rescue Broomhilda from him, but his cruel minion Stephen is not easily fooled.” (courtesy IMDB)

It’s hard to believe that Quentin Tarantino was only born in 1963, for he appears to have gone through enough career restarts to satisfy a man twice his age. A former video-store clerk with an encyclopaedic knowledge of film, Tarantino wrote his breakthrough script, True Romance (1993), for director Tony Scott, and it was damn good. His own debut as a director, Reservoir Dogs (1993), quickly followed, and afforded him instant entry into that select club of brilliant first-timers that includes Charles Laughton, Nicholas Ray and Orson Welles. He followed up with the sensational Pulp Fiction (1994) and then, when critics were just about to write him off as a burnt-out case, he completed his miraculous hat-trick with Jackie Brown (1997). Other key films include Oliver Stone‘s Natural Born Killers (1994), Robert Rodriguez‘s From Dusk Till Dawn (1996), Kill Bill Volume 1 (2003) and Kill Bill Volume 2 (2004). Tarantino’s films are renowned for their sparkling dialogue and over-the-top violence, and Django Unchained (2012) delivers more of both.

Tarantino is a master mashup artist. Not only can he bend genres like Uri Geller bends spoons, he can also wedge completely incongruous (and realistically banal) dialogue right in the middle of the mess – and audiences love it. Take Pulp Fiction for instance. How could one not enjoy Samuel L. Jackson and John Travolta‘s thugs? From rants about five-dollar milkshakes to the cultural differences between French and American McDonalds menus, these brutes had us in the palms of their hands. Audiences loved the murderous gangsters in Reservoir Dogs as well, and Colonel Hans Landa (Christoph Waltz) of Inglourious Basterds (2009) remains one of the most entertaining sociopaths in cinematic history. And so it is with bounty hunter Doctor King Schultz (Christoph Waltz) in Django Unchained, his silver-tongued charm masking a cynical nature that finds redemption with the help of freed slave Django (Jamie Foxx). And along with these chatty social outsiders you have the blood, oh so much blood. 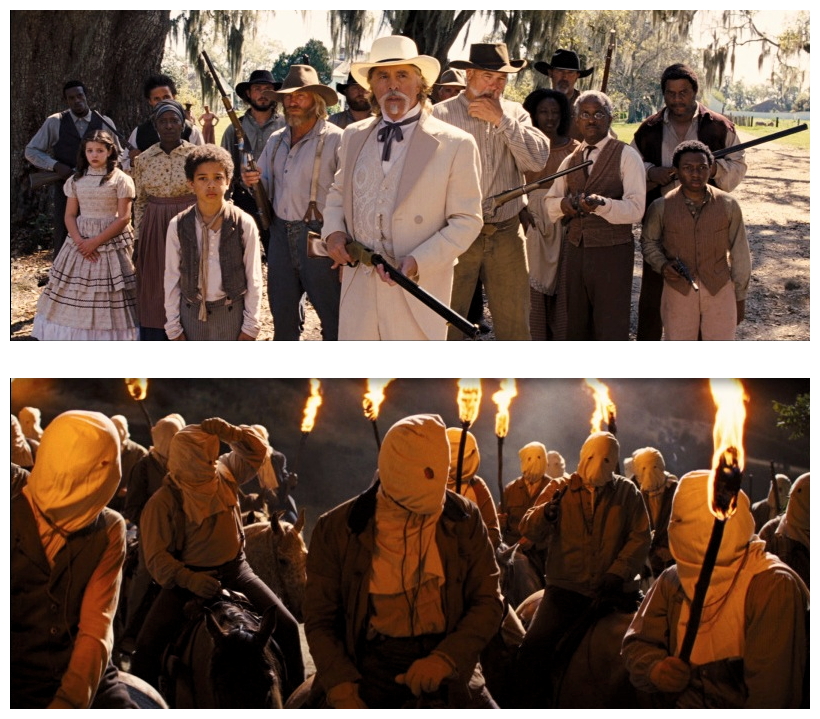 Kill Bill inundated the audience with blood spatter – it spurted out of necks in overenthusiastic fountains, splattered walls with short, sharp bursts, like visual onomatopoeia. But somehow we go along for the ride with these eloquent and generally inquisitive murderers (with the possible exception of the Bride in Kill Bill – chatter was not really on her agenda). Tarantino’s eighth feature film and his first western, Django Unchained is a muscular, provocative, full-blooded entertainment that was a big critical and popular success for the director. A loving and typically erudite tribute to past genres, Django Unchained combines elements of the European spaghetti western – notably the bleak sensibility of Sergio Corbucci‘s cowboy movies – with the politicised edge of seventies blaxploitation films. Doctor King Schultz, a German Dentist turned bounty hunter in the southern states of pre-Civil War America in 1858, frees Django after hearing the slave knows the whereabouts of his next bounty. 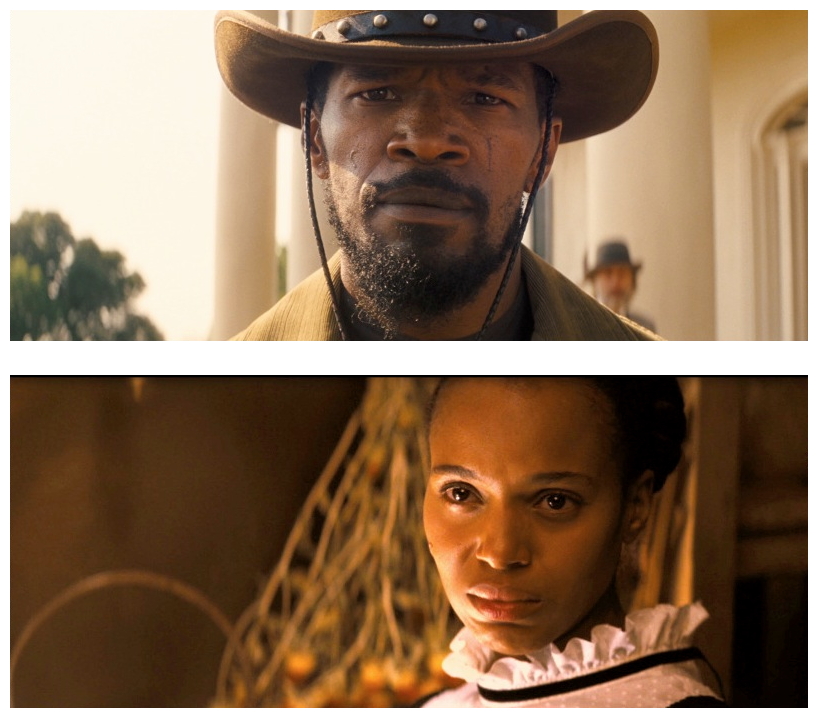 Schultz needs his help him hunt down three wanted murderers, who they find working on a plantation owned by a local Ku Klux Klan chief (Don Johnson). Seeing he has the skills to become quite the protégé, Schultz takes Django under his wing and promises to help him find his wife Broomhilda (Kerry Washington). Inspired by her Germanic name and the fairy tale that it leads him to recall, Schultz agrees to travel with Django. Broomhilda has been bought by sadistic Mississippi plantation owner Calvin Candie (Leonardo DiCaprio), who loves nothing more than to bet on slaves in fights to the death and ponder his own superiority. Tarantino weaves a rich tapestry of revenge, blood and crackling dialogue, assisted by a frankly fascinating array of character actors including Zoe Bell, Robert Carradine, Dennis Christopher, Bruce Dern, Walton Goggins, Samuel L. Jackson, John Jarratt, Franco Nero, James Remar, Tom Savini, Don Stroud, Russ Tamblyn, Tom Wopat – even Jonah Hill makes a cameo appearance as a Klan member and, in quintessential Tarantino style, you’ll laugh despite the heinousness of the characters depicted. 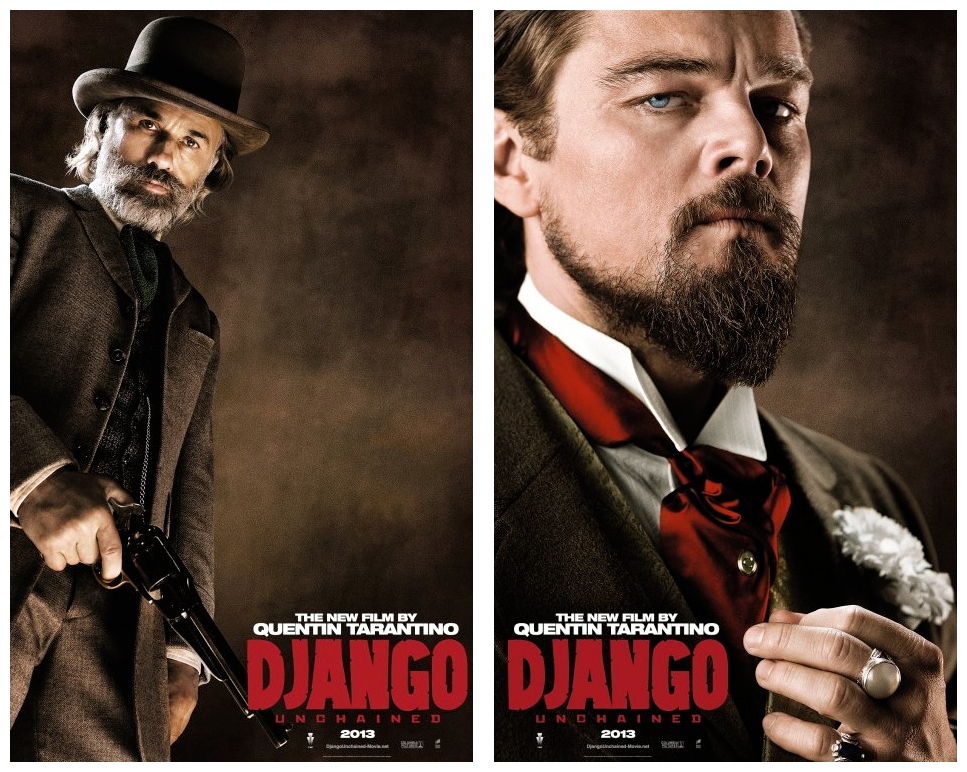 Along the way, the film revels in a series of shootouts, Mandingo fighting, and moments of suspense that reminds audiences that Tarantino is as gifted and stylish a director as he is a writer. Tackling the topic of America’s slave-era history as a blood-soaked revenge western (it has a body count of sixty-nine) Django Unchained was not without its critics. Nevertheless, the film’s angry, unblinking depiction of those brutal times clearly struck a chord, with Tarantino claiming (not without reason) that the film helped stimulate debate about slavery and race. Inventively violent, bristling with sharp dialogue and boasting great performances, Django Unchained is Tarantino’s longest-running film (165 minutes) and he handles the epic requirements of this ambitious project with masterly panache. The joy of Tarantino is his over-the-top exploration of humanity’s darker side. You’ll find yourself cringing, laughing and gasping in the span of a nanosecond at the hands of this master. 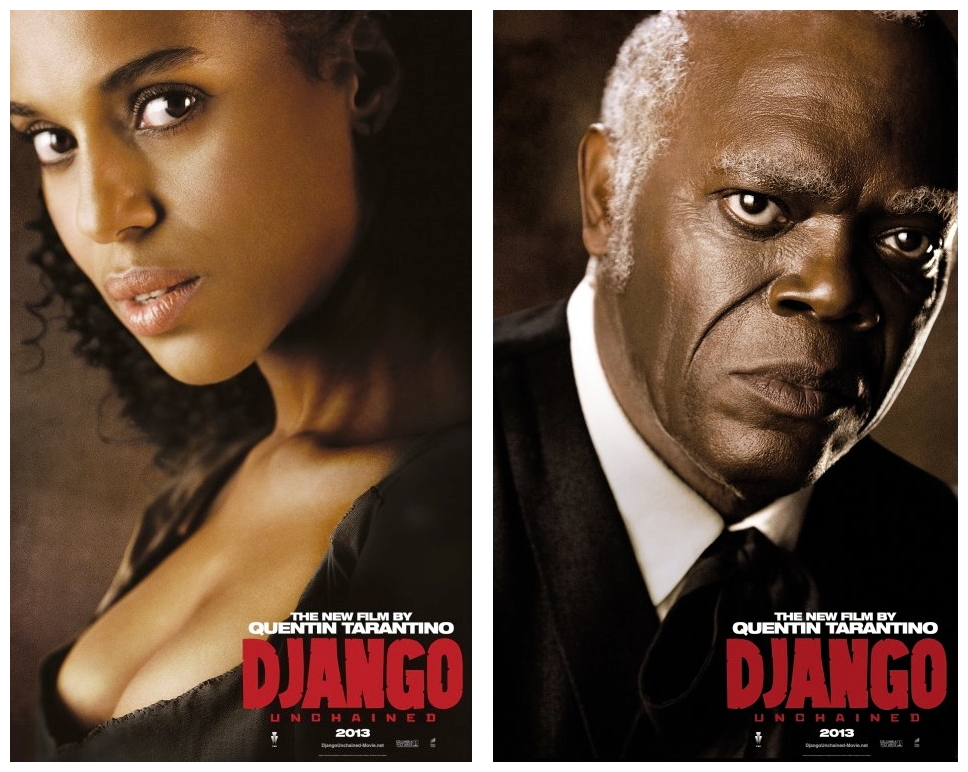 Whether he’s burning Adolf Hitler to a crisp, letting a leggy blonde slice people to pieces or shooting slave owners to smithereens, we are with him all the way. It’s quite a unique and hit-and-miss formula that should be marked ‘Don’t Try This At Home’. In other hands, these genre-bending mashups could go horrible pear-shaped (becoming just plain horrible), but Tarantino’s mastery keeps them on the right side of entertaining. Whether this has to do with his in-depth characterisation, as witnessed in the realistic and often off-the-topic banter of his characters, the absolute abundance of gore, his continued references to films of yore, or all of the above, it doesn’t really matter. We’re confused, we’re delighted, we’re horrified, and we love it. Having demonstrated to you the perils of probing the dark depths of cult cinema, I’ll vanish into the night, but not before inviting you to rendezvous with me at the same time next week when I shall seize the opportunity to discuss another dubious treasure at you for…Horror News! Toodles! 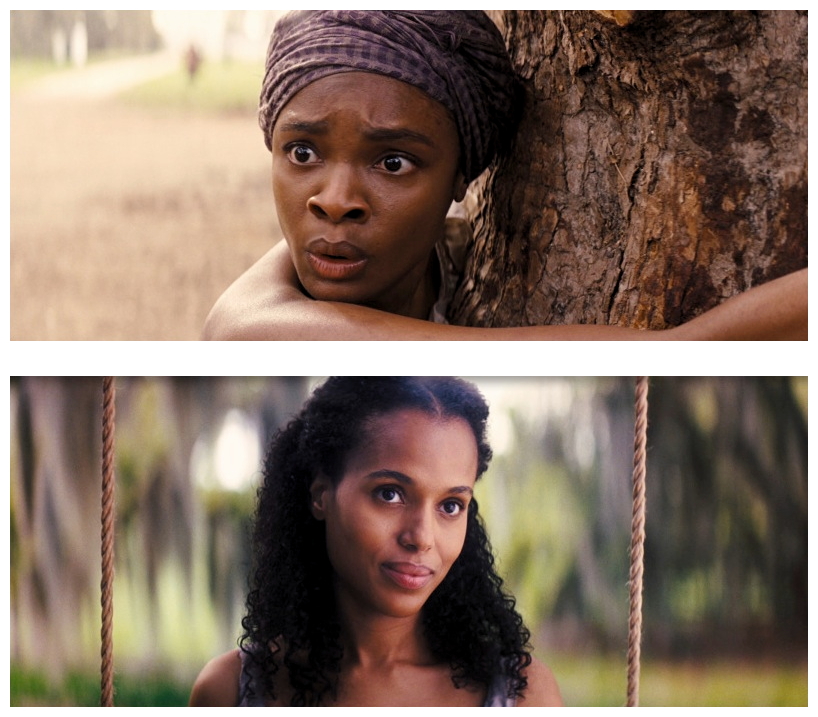