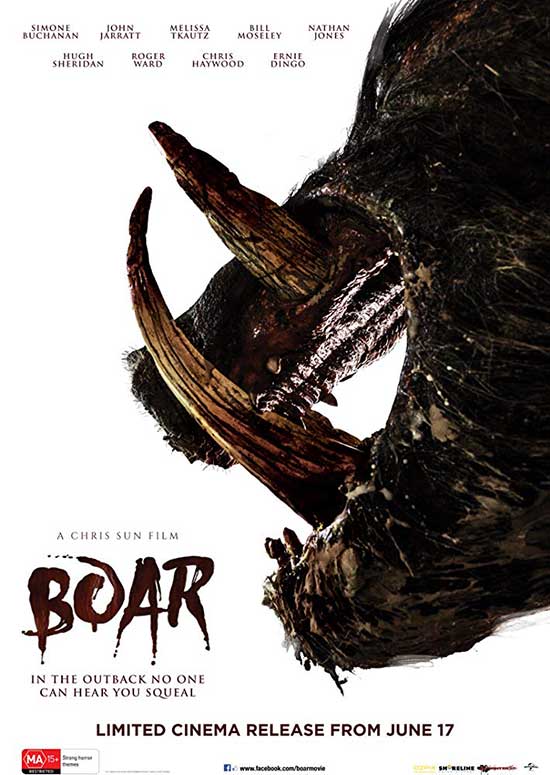 In the harsh, yet beautiful Australian outback lives a beast, an animal of staggering size, with a ruthless, driving need for blood and destruction. It cares for none, defends its territory with brutal force, and kills with a raw, animalistic savagery unlike any have seen before

For years, going back to the world of vhs and Blockbusters, I kept seeing one particular title on the shelves that looked appealing to my horror fanboy eye but just didn’t seem quite ready for rental. Yet it just didn’t seem to happen in each of those moments for whatever reason. Advancing to a mere 2 months ago, I finally bit the bullet and watched the 1984 bloodcurdler about a giant tusky terror on the loose in the Aussie outback called Razorback. It starred Gregory Harrison, then a popular star of tv’s Trapper John M.D. as well as more than a few celebrity pinup magazines. All about an American investigating the disappearance of his animal activist wife in the Outback and his discovery of a giant wild boar with a decided taste for humans. A superior chiller, I found, with the emphasis as much on some truly colorful human denizens as it is on gore and brutal kills. It charmed me with its off-kilter air all while providing more than a few well-timed jolts. So, when opportunity presented itself here at HNN for me to review a similar story of boar gone berserk with Chris Sun’s 2017 effort simply titled Boar. The question coalesced in my head as I put the disc in the player: Would it bear favorable comparison to its 34-year-old film forbear?

Much of the plot is similar to the earlier film. An Australian woman, with her new American husband, her teen children and her daughter’s boyfriend in tow, are visiting her brother’s farm in the outback and become targets of a mammoth rampaging boar decimating the countryside. Resting and recreating turns to running and fighting for survival in very short order. Can anyone escape the fury of this bloodlusting monstrosity?

Sun takes a sharp cue from Russell Mulcahy, director of the earlier Razorback, putting much of his eggs into the basket of eccentric characters to give the script life here. In many respects, the scenes at the local pub with all the crusty types coming out of the woodwork as well as bits with some farming locals are as entertaining in an oddball slice of country life way as the gore kill scenes are in setting up the shocks. Not that Sun shirks the latter in any way. Truthfully, he shows quite a reliance on suspense and imagination as he prefers the quick cut gore and keeping the full extent of the creature obscured for much of the runtime. That the boar is not shown in full until late in the action seems less to do with any highbrow concept of allowing the viewer’s imagination to come into play and more to do with the limited budget and questionable construct ultimately pops up in full view. Most of the film’s problems occur when audiences get a good, closeup look at the beast, a mechanical creation that becomes more obvious as the camera lingers. Use of a fairly obvious dummy in the mouth of the animal during one of the mauling moments didn’t help either. 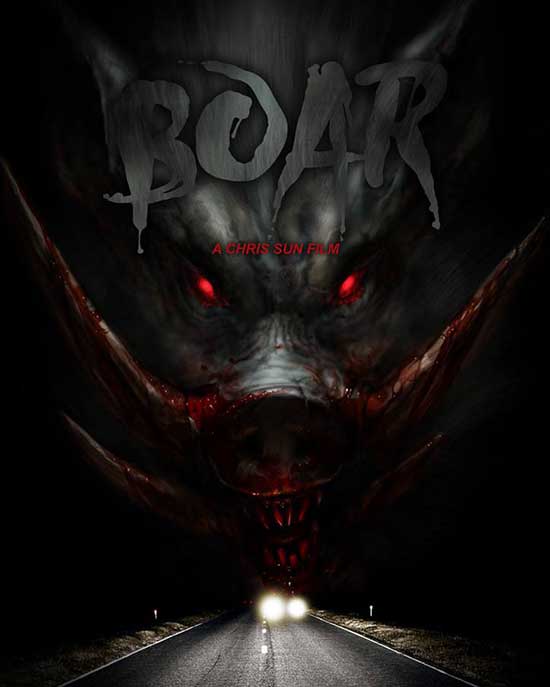 Witnessing much of the current made for order and mass-marketed horror product of late, respect for the audience keeps taking huge hits. Kudos should be given to Sun for not falling into that trap nor tumbling with the pitfalls of CGI overuse. In fact, according to an interview with the director by Jon Dingle at filmoria.co.uk, 85 percent of the monster visuals came courtesy of a three man-operated 14 foot fiberglass model. Kind of an old-school way of doing things. Just too bad he couldn’t get the camera off the beast a little quicker because keeping it static allowed me to scrutinize a bit too much and that can be death when dissecting a picture like this.

Sun also spoke of the influence of Razorback in shooting Boar. More than that, though, is his fondness for American Werewolf in London. “You know you can’t make a giant pig movie in Australia without people thinking about one of the greats, Razorback. Now that’s a great monster movie and I guess in a small way there was a little RB Influence there but to be honest, my inspiration for BOAR came from American Werewolf in London and Jaws. However I do have an awesome cameo from Chris Haywood (Razorback) in BOAR where he sits at the bar and talks about a giant pig terrorising the outback.” Haywood steals the proceedings in his brief cameo. One only wishes that there was room for Harrison somewhere, perhaps as a grizzled hunter vet who mumbles about an experience he had, oh say, 33 years ago.

Of the cast, each has a charm and a sense of the everyperson they bring to their respective parts. B-movie vet Bill Moseley nicely underplays, yet avoids the old fish out of water trope, as the step-dad Bruce. Nathan Jones (of WWE wrestling fame and Australian Musclepower Championships) plays the goodhearted, nice guy giant very smoothly. There is an element of goofball charm to him that’s ingratiating. Steve Bisley and Roger Ward share the thief acting honors with Haywood as two aging drunkards who stumble across victims of the boar at a campsite even as they trade hilarious barbs with each other. 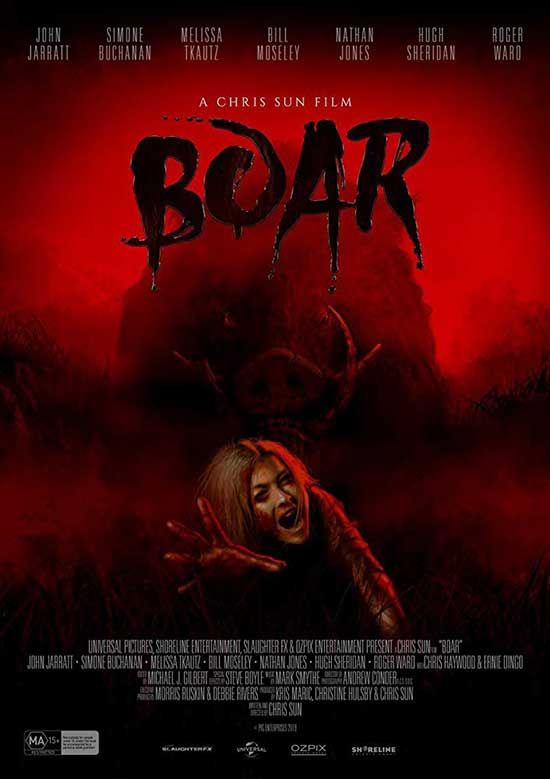 A prime example of the biggest problem with a horror picture with a central monster being the beastie itself when it appears in all of its almost but not quite realistic glory, the ride up to the complete revelation in Boar more than makes up for the back end shortcomings. And could serve as a cautionary tale to read of any boar attacks before you plan that next trip to the wilds of the outback.