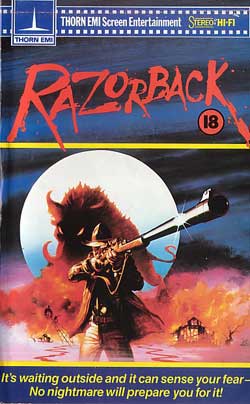 A wild, vicious pig terrorizes the Australian outback. The first victim is a small child who is killed. The child’s granddad is brought to trial for killing the child but aquitted. The next victim is an American TV-journalist. Her husband Carl gets there and starts to search for the truth. The local inhabitants won’t really help him, but he is joined by a hunter and a female farmer to find the beast.

The premise of Razorback sounds a lot like a SyFy Original Movie, and the execution is about the same. There aren’t a lot of flashy CG effects showing the monster boar that terrorizes the outback, but the plot progression is limited and the characters quite muddled. The film certainly knows that it wants a wild boar somewhere within its story, but the script just never knows how to handle the multiple characters strewn throughout the Australian territory of the setting. 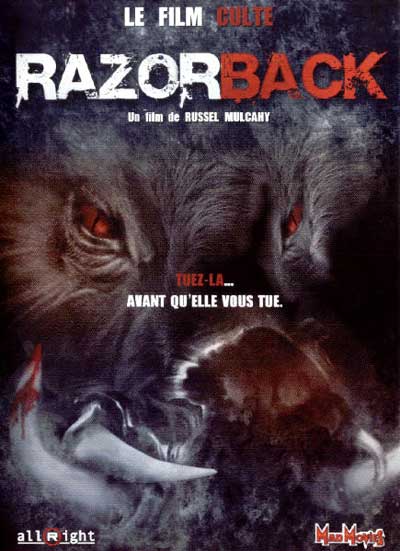 Razorback starts with a pretty interesting scene, where grandfather Jake (Bill Kerr) puts his grandson to sleep only to discover a wild boar that rampages through his house, eating the child whole. From there, the film is partially a revenge story, because Jake wants to take down Razorback on his own as a sort of retribution for the loss of his grandson and his own social status.

Then again, Razorback is also the story of a budding journalist named Beth (Judy Morris) who travels to the outback to make a documentary on the frequent hunting of kangaroos. The film journeys with her for a while, getting her set up in town, documenting the inhospitable townsfolk who don’t really want her there, and giving us glimpses of the dangers of living out in this wild environment. Beth has run-ins with Benny and Dicko Baker, who threaten her and then attempt to rape her before being run off by Razorback. All of this would be fine, perhaps more so than the rest of the movie itself, if director Russell Mulcahy simply stuck with Beth. But the film switches protagonists again after Beth finds herself pigchow, and the viewer finally finds oneself grounded in the character of Carl (Gregory Harrison) after he sets out to find his wife. 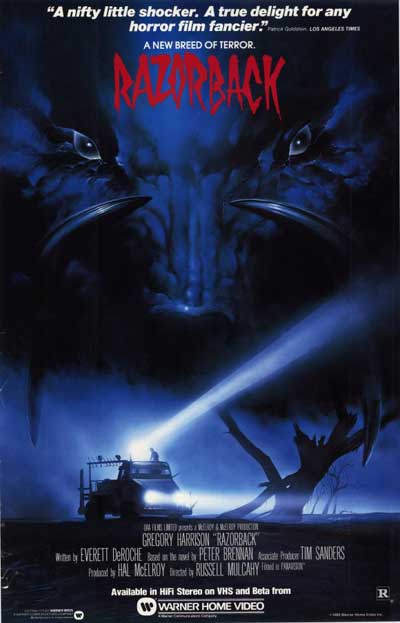 Carl’s a likable character, and he has the same set of ideals as his wife – he’s against the cruel killing and hunting of animals, he seems to be quite the journalist or documentarian himself based on the questions he asks the townspeople, and he goes through almost the same motions as his wife once he gets to the outback. Carl serves almost the exact same purpose as Beth, only a half hour later into the film; but by this time, we’ve already experienced the horrors of bushwhacking, the threats from nasty villagers. The trek Carl makes is both repetitive and slow because of this, and what at first seemed like a fast-moving romp through the brush slows to a trot.

However, all of this exposition is at least peppered with some great cinematic shots of the Australian skyline or the beautiful colors of dusk and dawn. Even some lackluster dream sequences are at least made a bit better because of the colorful scenery, which surprisingly draws the eye since the colors are in contrast to the reds and browns of sand. 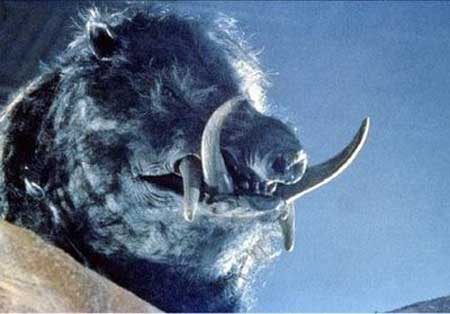 Razorback features a notable lack of appearances by Razorback himself, and instead opts for a drawn-out sequence towards the end of the film where Carl is chased, battered, and bruised by the boar until Razorback gets chopped up in a slowly circulating fan. It’s a disappointment that we don’t see a bit more of the boar attacks; instead, Mulcahy resorts to showing short clips where Razorback attacks cars or pulls half of a house away. 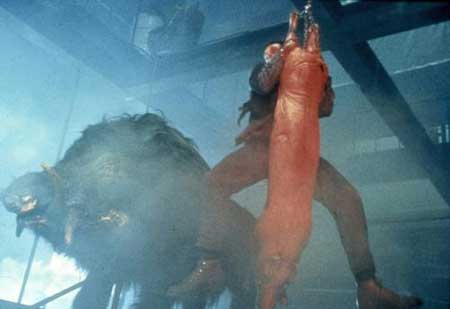 This is because Razorback never knows what to focus on. Should it focus on the revenge story begun at the start of the movie between Jake and Razorback? Should it resume the themes of violence found in the outback, and have Carl take revenge on the two men who tried to rape and hurt his wife? Carl’s role in the film is the most mixed up, because once he finds out what happened to his wife, it’s unclear why he continues to stay on at the ranch besides the very tenuous relationship he has with an animal tracker named Sarah (Arkie Whiteley). It’s due to poor development of his character; first he doesn’t care about revenge for his wife’s death, and then suddenly he does, setting out to murder Razorback even after showing his appreciation for animal life. 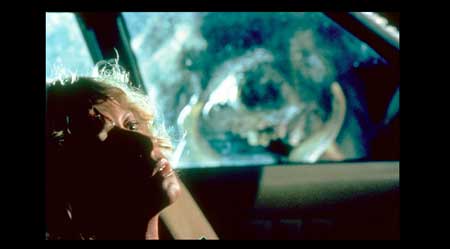 It’s unfortunate that Razorback’s plot is so jumbled, because the ridiculousness of the idea behind Razorback is ingenious and could have led to a very comedic creature feature. But because of the many themes combining within the film, Razorback never focuses on any one of them, making the film a lot less sharper than its title suggests. 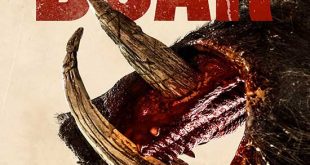