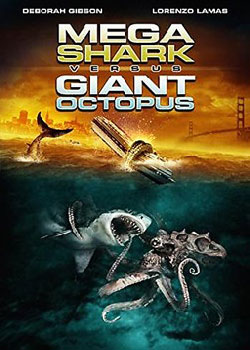 The California coast is terrorized by two enormous prehistoric sea creatures as they battle each other for supremacy of the sea.

Remember when the remake of Godzilla came out and the on-screen Godzilla, however big….. wasn’t as big as he was made out to be in the commercials? At last a film with big creatures that are “actually” really big! I believe the Godzilla, King Kong hunger exists in all us old school horror fans, even as silly as they may be. Well the man suits were replaced with CGI monsters so the presentation has changed a bit than what we remember. That still doesn’t take away the cool factor when you call up your friend and exclaim….”Dude”, come on over now – grabs some beers and lets check out Mega shark vs Giant Octopus!.

Yep, that little boy in ya pops right into gear to watch some big cretins go at it. Now don’t get me wrong I’ve seen several attempts that just fell on their face in highly laughable ways. Well hats off to FX team “Tiny Juggernaut” that saves the day with some pretty crazy scenes that carries the film from one whacked out moment to the next.

Sometimes the FX were a bit too CGI for comfort but the clinchers of a big shark chomping on the golden gate bridge, eating ships like hotdog’s and overshadowing subs like little toys was worth the wait. Let’s not forget his friend / arch enemy giant octopus who has some pretty cool scenes involving taking down entire drilling stations with his gigantic tentacles or just swatting planes like flies. It was one of those laugh and “hell ya” moments if you ask me.

Well jumping back a bit, lets get to the story at hand. Debbie Gibson stars as Emma MacNeil, a perky marine biologist employed by Norcal who decided to borrow a mini-sub at the wrong time. As she takes the research sub out into the arctic checking out the migration of whale migration patterns, a military testing chopper decides to unleash some sonar devices. Well besides stirring up the scenery it just so happens that it also unleashes a very large battle frozen in time. 2 prehistoric beasts frozen in ice while in mid battle. Yep, it’s a megaladon shark and a gigantic octopus.

Though the release of gigantuans goes somewhat unnoticed, it’s after a whale carcass beaches up half eaten that Emma discovers a giant shark tooth embedded in it. Upon discovery, she seeks out former professor Lamar Sanders to debunk the find. Not too long after, with a series of ocean attacks, they are summoned in to figure out a solution to the issue of these huge aquatic beasts. The military headed by Allan Baxter (Lorenzo Lamas) in charge of the operation is intent on ridding the water of these beasts who are attacking ships like toads swallowing flies. The solution seems to be to lure them per pheromones and inducing a mano-a-mano attack between the 2.

Debbie Gibson besides being hot as hell, proves she can act and carry a role nicely. A long way from her teen idol singer days I was actually impressed with her abilities. While this may be off the subject , I instantly thought of her as a prime candidate for the TV show Fringe if Anna Torv hadn’t taken the role. Oh well you never know, right? I had alot of fun watching this film, as you can tell. Directed by Jack Perez, it had the right elements to keep it moving. I guess I only wish the budget was in place for more crazy monster attack moments.

I swear some of the giant shark scenes are the zaniest I’ve seen since my viewing of “Big Man Japan”. Surprisingly for a film with a silly name it had a decent production with some nice location shots to boot. Whatever your preference is, this was one I could actually watch with my kids without fear of corrupting there minds.

It wasn’t short after starting the film that they were grabbing there plastic shark toys and calling them “megashark”. fun stuff! and one mother of a big sea monster rumble and absurdly large beast-thrashing-film!