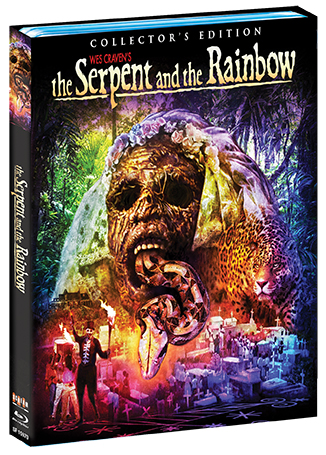 An anthropologist goes to Haiti after hearing rumors about a drug used by black magic practitioners to turn people into zombies.

Wade Davis, a Harvard-educated anthropologist, traveled to Haiti in the early eighties to research the Vodou religion and its practices.  His specific focus was concentrated on zombies, and the assortment of ingredients utilized in creating the poisonous powder that transforms a person into the “living dead.”  His findings were detailed in the nonfiction novel “The Serpent and the Rainbow,” published in 1985.  Davis and the book were both criticized by many in the scientific community, claiming multiple inaccuracies in his reports.  Of course, how does even the most intrepid toxicologist know precisely how much dried sea worm should be added to your batch of black magic dust? 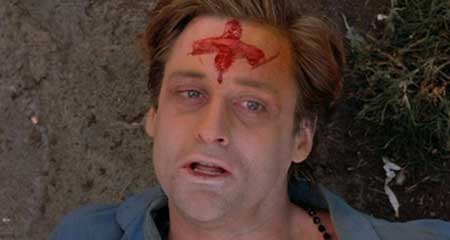 Egghead haters aside, the book resonated with readers, who were fascinated and horrified.  Screenwriters Richard Maxwell and A.R. Simoun were commissioned to pen a fictional film inspired by the novel, and Davis agreed to sign off the rights to Universal Pictures under two simple conditions: Peter Weir directs, and Mel Gibson stars.  Neither happened.  I imagine Weir was tuckered out from his last foray overseas to bring another iconic novel to screen (“Mosquito Coast”), and Gibson was probably uncomfortable being the only white dude in an entire cast.  Wes Craven, still riding high from “A Nightmare on Elm Street” but trying to shake off the unfortunate “Deadly Friend” (a guilty pleasure of yours truly), was hired to direct with comedic actor Bill Pullman (his only major credits were “Ruthless People” and “Spaceballs”) to serve lead duties.  One can see how this could have spelled cinematic disaster.

Many have disparaged the film over the years for ignoring the intricacies of its source material in favor of obvious genre tropes, and I couldn’t agree more.  However, if memory serves, I write for (and you’re currently reading) HorrorNews, not The Scientific American.  Leaving the nit-picking to the nerds, “Serpent” is one of the very best thrillers of the decade, a feast of both cinematography and nightmare imagery.  Craven serves as demented ringmaster to this fun house take on Davis’s work, capturing an artist’s sense of time of place (as Weir would have) while relentlessly bringing the scares for those unconcerned with the state of Haitian politics during the period.  Make no mistake, this movie is not a history lesson.  “Serpent” is a lark, and at times feels like “Angel Heart Lite,” but it remains a must-see for the uninitiated. 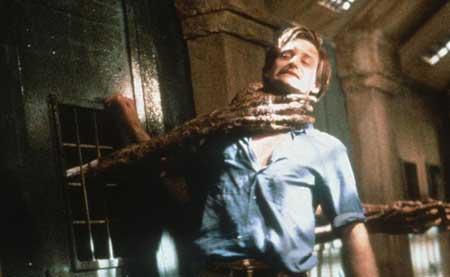 Pullman portrays Professor Dennis Alan, sent to Haiti by a pharmaceutical company in search of the rumored “zombie powder.”  His mission is to isolate the ingredient that paralyzes and leaves the victims unconscious, in hopes of discovering a safer substitute for common anesthesia.  Upon arrival he meets Marielle Duchamp (Cathy Tyson), a physician at a local institution that was once home to Cristophe (a haunting Conrad Roberts), a local man who had been turned into a zombie years prior and currently resides in any one of the cemeteries surrounding the village.  Capable of speech unlike most victims, Cristophe is the key Alan requires to revealing the secrets of the powder and saving countless lives. 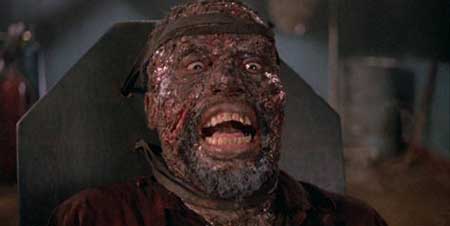 Under the oppressive thumb of dictator Jean-Claude “Baby Doc” Duvalier, the country’s civil unrest (the film crew had to finish principal photography in the Dominican Republic after being informed that their safety in Haiti could no longer be guaranteed) is weaved into the fabric of the core story seamlessly, adding an immediate level of true terror to the proceedings.  This blend of brutal reality and fantasy is embodied by the character of Dargent Peytraud, a Vodou priest and officer in the Tontons Macoutes, Duvalier’s feared secret police.  As portrayed by veteran actor Zakes Mokae (“Cry Freedom”, “Dust Devil”), Peytraud is a memorable, enigmatic villain.  Whether invading dreams through his dark craft or menacing Alan with mere words during an interrogation, Mokae is mesmerizing in the role.  He plays his cards tight to the chest, never veering into over-the-top theatrics that would cheapen the effect of his performance.  He is absolutely outstanding. 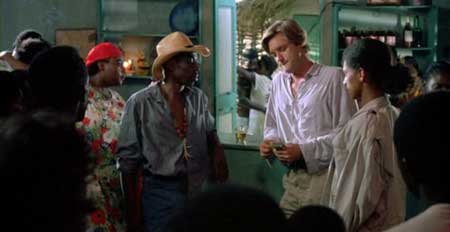 Given that this is a Wes Craven joint, our hero encounters plenty of shocking visuals along his journey, from dream sequences to involuntary hallucinations.  Though “Serpent” grows overwhelming to the point that “Is he tripping balls or just sleeping?” becomes a valid question later on, there’s no denying the power of these moments.  One particularly nasty nightmare involving the corpse of a young bride is still discussed amongst my peers when the conversation strays to the topic of movies that kept us awake as children.  Once Alan breaks the proverbial final straw, Peytraud (who, in his defense, gave the guy plenty of chances to leave Haiti peacefully) inflicts the ultimate punishment and turns the doctor into a zombie to serve as his personal slave.  Buried alive after uttering filmdom’s greatest horror movie tagline (even those who’ve never seen it know the quote), Alan is dug back up by Cristophe to exact his revenge and save Marielle before she is assassinated by the police.

Unfortunately, the tired “battle to the death” finale threatens to sink the enterprise down into schlock territory, piling on pointless special effects and false endings in lieu of the building dread the film had done such a fine job of establishing.  One almost wishes Craven had run out of money before shooting this empty spectacle, forcing his writers back to the drawing board to invent something a bit more meaningful than a make-up and lighting show.  At the very least, it’s an impressive display, and no one has ever accused Craven of forging a career with subtle nuance.

Despite box office failure, “Serpent” has survived obsolescence in the same way Craven’s own “People Under the Stairs” has.  Both are far better motion pictures than they were initially given credit for, and video sales and rentals in the years following their releases have proven as such.  Though it will never be spoken of in the same exalted breath as “A Nightmare on Elm Street” or “Scream,” it will always hold a dark horse candidacy for the maven’s best flick in my heart.  I love a plucky underdog, and “The Serpent and the Rainbow” is just that.  If you’ve never seen it, what the hell are you waiting for?