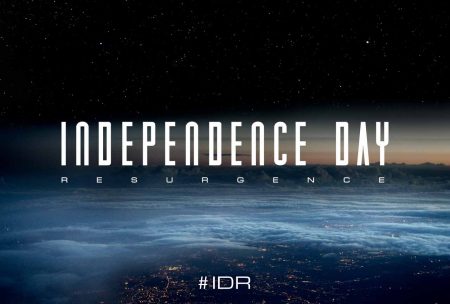 Using recovered alien technology, the nations of Earth have collaborated on an immense defense program to protect the planet. But nothing can prepare us for the aliens’ advanced and unprecedented force that returns to finish what it started 20 years ago. Only the ingenuity of a few brave men and women can bring our world back from the brink of extinction, but is there enough time left to do so?

Personally, I’m not all that big a fan of Independence Day (1996). It was a big, brash & loud event film that made its mark and was promptly forgotten about afterwards. It’s probably best remembered for giving Will Smith his biggest role to date at the time. But apparently Director Roland Emmerich never forgot about this one, and was quietly biding his time, plotting this sequel all the while. The big question is, does anyone (besides Emmerich & company) really care about any of this nonsense 20 years later?

If you saw the last film (& let’s face it, you know you did), then the plot to this one holds no real surprises for you. Earth has moved on from the last attack, nations have put down their weapons and there hasn’t been an armed conflict on Earth since the events of the last film. One of the niftier touches we see as the film opens is the idea of humanity using the alien technology to upgrade not only our own defense systems, but everyday life as well. The earth presented in this film is one that’s technologically advanced, but not egregiously so. Humanity was given an opportunity to upgrade, and did so in a believable (& visually appealing) manner. We even have a cool looking global defense system in place on the moon! 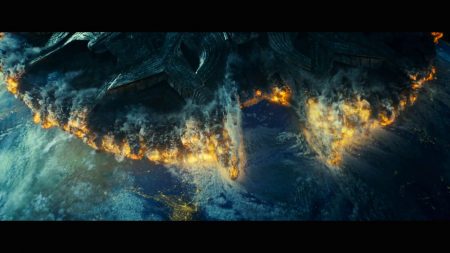 And it’s on the moon where the film starts, as the script (written by FIVE people) systematically introduces to every one of our main players. The introductions are fairly perfunctory though, mainly because we already know what’s going to happen, and who’s going to live or die. The script (again, written by FIVE people), does absolutely nothing revolutionary with its characters, and if you’ve seen any big budget disaster film in the last 45 years – you pretty much know exactly what’s going to happen here with these guys. That formula still works mind you, but deep down inside I was kind of hoping that maybe this script (written by FIVE people) might buck that trend, and do something different with its characters here. 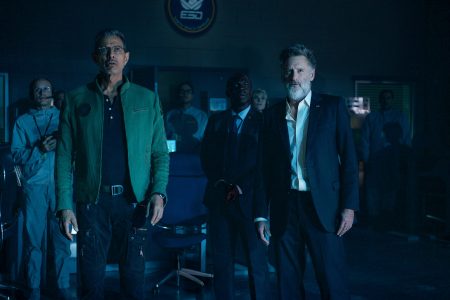 It isn’t too long before the aliens make their big move, which involves a ship so big that in covers over 1/4 of our planet. The ship is so damned big that it comes complete with its own gravity, which is too bad for England & China because it basically sucks up both of those countries whole. In a nutshell, billions of people have died inside of the first 20 minutes of this film! Among those billions of people is poor Vivica A. Fox, who has about 5 minutes of screen time total before fate claims her. But she’s only one of quite a few familiar faces that return from the first film. Jeff Goldblum is back as David Levinson, along with Judd Hirsch as his father, Julius. Bill Pullman returns as former president Whitmore, this time with Maika Monroe as his daughter, Patricia. And Brent Spiner is back as oddball Dr. Brackish Okun, who has just conveniently awakened from a 20 year coma (oddly enough, his limbs haven’t atrophied one bit in those 20 years because he’s up & out of bed immediately). Newcomers include Charlotte Gainsbourg as Goldblum’s love interest, William Fichter as General Adams, Sela Ward as president Lanford and Deobia Operai as Dikembi Umbutu, an African warlord who’s killed quite a few aliens. 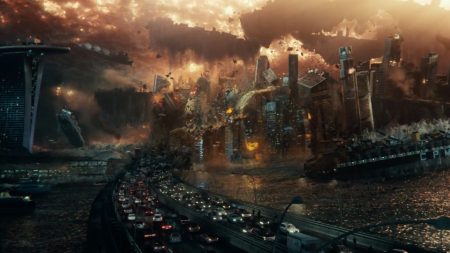 Also new to the franchise are Liam Hensworth as Jake Morrison, who immediately presents himself as the cliche hotshot pilot that has a beef with Dylan Hiller (Jesse T. Usher) who is the son of Viveca A. Fox & Will Smith’s character from the first film.. Once again, the script (still written by FIVE people) does nothing to spice up the beef between the two, and it’s a given that they’ll settle their differences once the poop hits the fan, so there’s absolutely no emotional heft given to their long standing dislike for each other. As I watched this film, I kept thinking about how a 10 year old could’ve probably written this script (which was actually written by FIVE people. Have I mentioned that?). My point is, if you’re looking for a smart, scary & thrilling story here – then you spent your hard earned money on the wrong movie. 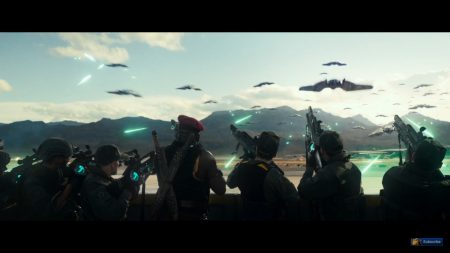 But as dull as the characters are, the special effects are pretty spectacular. The aliens themselves are really on display here, not like in the first film where we saw them, but only fleetingly. They’re large, creepy and slimy and their tentacles are wondrously frightening. I don’t wanna give away too much, but the queen alien on display at the end of the film is one of the most realistic (& scary) looking CGI creations ever put to film. She’s large, in charge and angry! The other CG effects do a very good job of making the audience believe that all of this rigmarole might really be happening. The spacecraft are sleek, shiny and fast, the guns look like they have some heft to them, and the whole enterprise looks first rate. There’s also another race of aliens in play here, and while I won’t divulge their role in the film, their look reminded me of Marvin the depressed robot from The Hitchhikers Guide To The Galaxy (2005). 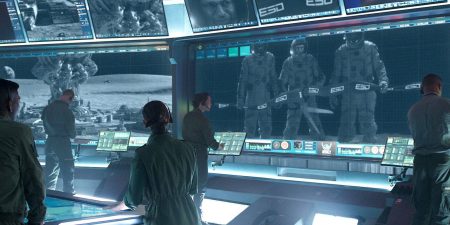 But there are absolutely no surprises to be found here, save for the threat of a third entry in the franchise. I think some of you might have a good time watching Independence Day: Resurgence, but spectacular special FX don’t necessarily make for a good film. I’m guessing the lure of a sequel to a very popular film will draw in curious movie fans, but the oh so slight story (written by FIVE people) is a big problem as it does absolutely nothing new or innovative to make this film stand out above the crowd of big Summer films behind it. It’s content to rehash themes from the first film, and pretty much leave it at that. But the special effects help to soften the blow a bit. See it if you must, but I’ll forget about it as soon as I finish typing this last word.

Independence Day: Resurgence – 1.5 out of 5 shrouds.